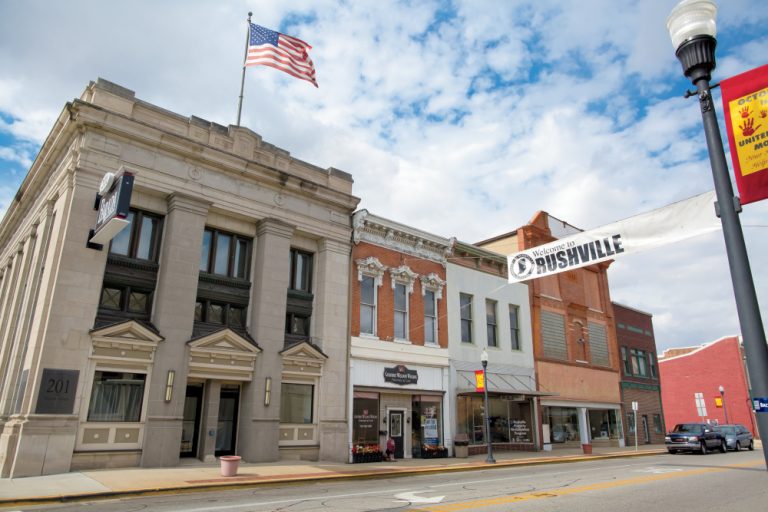 Recently, Rushville (population 6,200) has been taking dramatic steps to attract visitors and residents, beef up the business climate and ensure this much-loved community a viable future.

“The state is telling us that some of the best things we can do are to increase the assessed value of property, our per capita income, our population in general, school enrollment and school attainment,â€ says Brian Sheehan, city director of special projects.  “We are doing what we have to do to make sure we are here in the future.”

The Rushville renaissance began almost by accident in 2004, after Mayor Mike Pavey (then a city councilman) attended a concert in a nearby town. Impressed with the venue, he and friends came home convinced that Rushville should have its own outdoor amphitheater.

“We didn’t think of it as a huge project at first, more something that we could do in segments,â€ says Pavey. “We are a rural community, and one thing we do well is work together. In the past we had organized concerts, so there was enthusiasm about the idea of bringing in an attraction, getting the community together and having fun.”

Volunteers formed the Riverside Park Organizing Committee and coordinated donations of money, materials and labor. Luckily, the city already owned a perfect site, Riverside Park, which had been underused for years. In the wet spring months it often flooded, but in summer became a dry, conveniently located open space. With money from individuals, businesses and the city, Rushville residents pitched in and built the amphitheater themselves within six months.The Riverside Park Amphitheater, designed to resemble one of the beloved covered bridges that dot the area, hosted its first concert in summer 2005.

Build It and They’ll Come

The project won a prestigious statewide Primacy of Place Award in 2014, which recognizes “communities who are working to enhance quality of life through innovative programs.â€ The project’s success prompted additional improvements to the park and inspired city leaders to tackle more projects that would help Rushville grow and prosper.

One such project is renovating the 20,000-square-foot building on Main Street that houses the Princess Theater. A downtown landmark, the theater will serve as an indoor entertainment venue, while the rest of the square footage becomes a new city hall and a home for Ivy Tech Community College.

A planned downtown event area will be used for parking during the week and a farmers market on weekends. Also in the works are two housing projects, downtown business improvement projects, owner-occupied housing improvement projects, and a decorative gateway plaza at Riverside Park that will feature a splash pad. A large building project, a public/private partnership, will include a community kitchen, a business incubator and more. All told, some $40 million will be spent on downtown projects.

These ambitious plans garnered Rushville one of only two Stellar Communities Awards from the state in 2016, saluting “revitalization and rehabilitation efforts in the city’s downtown and historic district.”

“It’s pretty unbelievable what we are doing, when you consider our size,â€ Pavey says. “Our community has never been a champion — we were always a runner-up. But there is a sense of pride now and people think, ‘Wow, we are the best.’ That’s a new way of thinking that we’re adjusting to, and it’s fun to watch.â€

“It’s pretty unbelievable what we are doing, when you consider our size.”