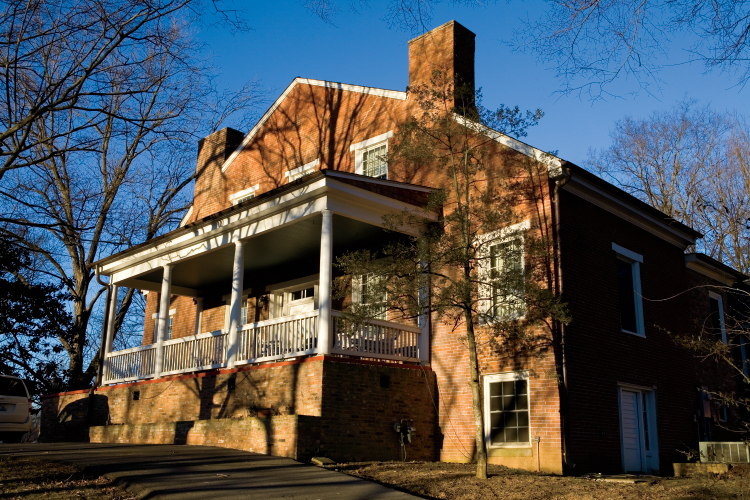 When Amelia and Kyle Kiser, both physicians and community leaders, bought the historic Spotswood House in 2007, they took on more than your average home renovation. They took on the formidable task of bringing history back to life. The couple had moved to Glasgow, her hometown, in 1999, drawn by professional opportunities, proximity to Amelia’s family and the area’s desirable quality of life. “It has great schools, and you either know everyone or connect with them pretty quickly,” Amelia Kiser says. “And you don’t have the urban issues here. It’s generally very safe and is a nice place to live.”

The family was living in a modern-day home, when a friend called to tell them the Spotswood House was for sale, knowing of their interest in “all things old,” she says.

The gracious brick Georgian Colonial house at 309 North Race St. was well known as one of Glasgow’s oldest homes. It was built sometime between the late 1790s and early 1800s by Alexander Spotswood, a Revolutionary War general who moved from Virginia to his land grant property in the Kentucky Barrens. But age had not been kind to the house, which was virtually hidden by overgrown landscaping when the Kisers first viewed it. Inside, it was in dire need of repair. A lot of repair.

“It was really pretty bad,” Amelia Kiser remembers. “I wasn’t sure we could actually make it livable for us, but Kyle always said, ‘We can fix it! We can fix it!’”

The fixing went on for nearly two years, before the Kisers and their two children, 15-year-old daughter Olivia and 10-year-old son Stratton Riley, moved in. The list of repairs Kyle Kiser ticks off is daunting. Layers of old roofing had to be removed. Plaster was crumbling throughout. The single bathroom was falling off the house. There was no central heat or cooling. A fire in the kitchen had damaged the structure. There was no drainage, so water was an issue from roof to basement. The house had to be stripped down to its brick walls.

“There was nothing that did not need to be addressed,” Kyle Kiser recalls. “Not any room that didn’t need to be worked on.”

On the positive side, the house had 14-to-18-inch-thick brick walls, gorgeous original moldings and trim, original fireplaces, a wooded 4-acre lot in the midst of Glasgow’s North Race Street Historic District and fabled status as one of the area’s oldest landmarks. In an important sense, restoring the Spotswood House was a gift to a community both the Kisers feel strong loyalty to: She is a member of the school board, and he a member of the ambulance board, in addition to other civic involvement.

“We feel that being part of a community means giving back what you can,” Amelia Kiser says. “Growing up here, I benefited from so many opportunities, and I want to make opportunities available to others.”