Baton Rouge is charming, fun, welcoming, affordable — and anything but boring. 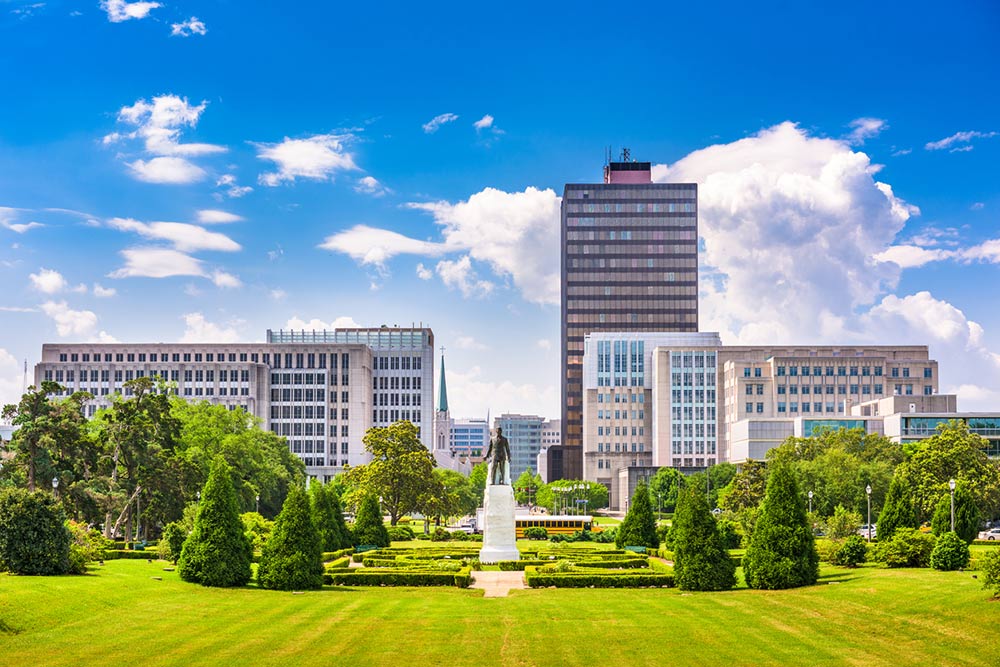 Vibrant culture, a famous food scene, cutting-edge companies — and you can afford to live here? It sounds too good to be true, but Baton Rouge locals simply know it as a lifestyle. The Baton Rouge community offers the thriving energy of a major metropolitan area thanks to its world-class universities and research centers, all while maintaining a small-town feel. Here’s why thousands of millennials are flocking to the fast-growing capital city of Louisiana:

1. A Modern-Day City Steeped in History

Baton Rouge’s downtown has experienced a dramatic transformation in the past decade. The once sleepy area along the Mississippi River is now a walkable, urban setting with bustling restaurants, bars, grocery stores, arts and entertainment. Take for instance, the new Watermark Hotel, a bank headquarters-turned-boutique hotel that pays homage to its history by serving upscale Southern cuisine in a restored art deco space. While downtown Baton Rouge is dotted with historic buildings housing new purposes and people, there are newcomers that add a modern aesthetic to the city’s landscape—like the Shaw Center for the Arts, a multi-use museum, theatre and arts complex. But even with millions of new investments in downtown Baton Rouge, the city’s most iconic structure remains to be the Louisiana State Capitol—the tallest capitol in the nation built by the state’s infamous former governor, Huey Long.

As Louisiana’s capital, Baton Rouge is a melting pot of the country’s most dynamic culture. The capital city’s signature cuisine is no exception. Drawing on influences from nearby New Orleans and Cajun country, Baton Rouge’s cuisine embraces its Southern traditions (gumbo, boudin, red beans and rice), all while putting a new twist on Louisiana food. Famous southern staples like Poor Boy Lloyds, Chicken Shack, and Smokin’ Aces BBQ are just a few of Baton Rouge’s most beloved restaurants for both locals and visitors (including Mark Zuckerberg and Barack Obama). But Southern food isn’t all the city has to offer – diners looking to expand their taste buds can find an assortment of global flavors, with Honduran, Vietnamese, and even Venezuelan-Dutch fusion restaurants. With new additions like White Star Market, Baton Rouge’s first food hall, the gastronomic options are endless.

Baton Rouge’s nightlife is equally as diverse as its restaurant scene. A slew of breweries and distilleries are popping up in Baton Rouge, including Cane Land Distilling, one of the only “farm to bottle” rum distillers in the country, and Tin Roof Brewing Company, who makes a “Voodoo American Pale Ale.” Baton Rouge isn’t short on creative cocktail bars either—you can head over to Magpie Café for a lavender-infused cocktail or Olive or Twist for a boozy sno-ball.

3. Anything But Boring – But Also Affordable

Unlike other cities, in Baton Rouge, enjoying everything the city has to offer doesn’t come at a high cost. In fact, many of Baton Rouge’s best amenities are free. The city’s dozens of museums routinely host free entry days and the city’s libraries, renowned as some of the best in the country, offer free meeting spaces, rentable art, children’s story time, and even 3D printing. If you’re looking for a city with plenty of outdoor activities, Baton Rouge has you covered with its 4.31 mile walkable, bikeable Mississippi River Levee Path and 184 parks that offer everything from rock climbing to paddle boarding lessons, all free of charge. Follow local Baton Rouge bars and restaurants on social media to find the best free (yes, we said free) food and drink nights and catch the best live music the city has to offer (no cover required).

4. A City of Celebrations

Whether you’re an LSU fan or not, visitors from around the world enjoy Louisiana State University’s tailgating traditions. Thanks to the city’s love for the festivities and prominent Southern culture, Baton Rouge is the tailgating capital of the world. Festivities begin with fans setting up hundreds of tents and RV’s right on LSU’s campus, equipped with everything from local beer on tap to big screen TVs. And forget about traditional tailgate food – Baton Rouge takes it to a whole new level with a blend of Cajun and Creole cuisines.

The Baton Rouge passion for celebration goes beyond the football field. Baton Rouge residents celebrate their city throughout the year with festivals, many of which are free and open to the public. Festivals showcase everything from the city’s cuisine, (Crawfish King Cookoff), to its creative community (Louisiana International Film Festival), to its unique culture (Spanish Town Mardi Gras). As a college town, Baton Rouge has a history of welcoming people from around the world and prides itself on the friendliness of its community. Whether you’re born and raised in Baton Rouge or new to the area, you can join the party.

5. Birthplace of the Blues

Though often overlooked, Baton Rouge has a rich history of swamp blues. In fact, Baton Rouge is home to one of the oldest blues festivals in the country, drawing in people from as far as Australia every year. The Baton Rouge Blues Festival invites people to celebrate local legends as well as the blues-inspired music of today, completely free of charge. But the festival isn’t the only time of the year you can catch live music in Baton Rouge. Just stop by any one of the city’s classic “juke joints” like Phil Brady’s (with the longest-running 22-year Thursday night blues jam around), Teddy’s Juke Joint (the last stop on Highway 61, the famed “Blues Highway”), Dyson House Listening Room, Club Coozan, Red Dragon Listening Room, the newly launched Mid-City Ballroom and more.

Baton Rouge’s perfectly sized region offers the resources and opportunities typically found in big cities, all with the support of a connected, close-knit community. With a high median income and low cost of living, residents can make the most of their paychecks. Not to mention, a rising startup scene and global employers like Coca Cola, Exxon Mobil, EA Games, and IBM have helped make Baton Rouge Louisiana’s leader in job creation, with 6,000 new jobs added in the past year.

Thanks to numerous universities and state-of-the-art facilities such as Louisiana State University and The Water Campus, a 36-acre, $60 million development along the Mississippi River, the city is a top-line research hub. Researchers from around the world meet in Baton Rouge to collaborate on coastal restoration, cure chronic disease, and make new discoveries.

With dozens of museums and parks, Baton Rouge offers a range of activities perfect for kids and families. The kid-friendly Knock Knock Children’s Museum is one of the latest additions to Baton Rouge: through 18 interactive learning zones, kids engage with skills like math and reading and even practice real-life lessons like learning to fly a plane, all within an interactive and playful environment. After a visit to the museum, families can head to the next-door City-Brooks Community Park where they can enjoy activities like the splash pad or an outdoor movie experience. Baton Rouge kids are some of the nation’s best and brightest thanks to the region’s top-ranked public and private schools. Plus, New Schools for Baton Rouge is revolutionizing the city’s public education system by attracting the country’s highest-performing charter schools.

8. High-Rise Apartment or Historic Bungalow — Make Your House a Home

Ranked as a “Top 10 Real Estate Market to Watch” by Trulia, Baton Rouge offers a variety of housing options — from high-rise apartment buildings to historic homes dating back to the 1880’s. Given the city’s low cost-of-living, residents can find the home of their dreams at a price they can afford. In fact, residents pay no property tax on the first $75,000 of their primary residence. As Baton Rouge’s millennial population has grown in recent years, downtown housing options have expanded to include luxury apartments like The Commerce Building, which has a rooftop pool overlooking the Mississippi River. Just a few miles from downtown, residents can settle into the quieter side of the city, like the historic neighborhoods of Spanish Town, Beauregard Town and the Garden District, home to newly renovated bungalows. New neighborhoods like Perkins Rowe or Longfarm Village offer brand new housing as well as work and retail space – giving residents easy access to everything they need right in their own backyard. And for those looking for serene space in more rural Louisiana, they can find it in any of the city’s surrounding parishes.

Want to learn more about what it’s like to live in Baton Rouge? Visit Life in BR to find info on the region’s jobs, housing, schools, and more.