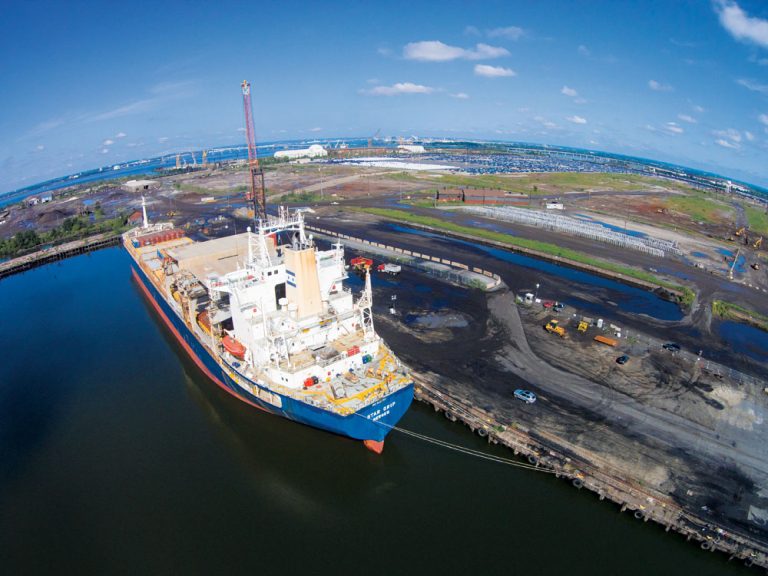 In its heyday during the 1950s and 1960s, the Sparrows Point area of Baltimore County contained the largest steel mill in the world. Today, it’s home to one of the largest and most flexible industrial and marine terminal developments in the country.

Tradepoint Atlantic is the new name for the old Bethlehem Steel property, which consists of 3,100 acres on Sparrows Point within the Port of Baltimore.

The development team, which took control in September 2014, is a joint venture of Redwood Capital Investments of Hanover, Md. and Hilco Global of Chicago. They are working to convert the property to a state-of-the-art global logistics center offering a combination of deep-water berths, rail and highway access.

“We look at this as being a 10-year redevelopment effort, so we’re three years in,” says Kerry Doyle, Tradepoint Atlantic chief commercial officer. “We’ve made considerable progress in the first three years in cleaning up the site and getting it ready for redevelopment, and we’re seeing significant interest from some marquee names such as Under Armour, FedEx and Lafarge Holcim. The amount of interest that we’ve attracted to this site has exceeded our expectations.”

The owners have razed the steel mill, prepared a master plan for redevelopment and begun building facilities for industrial users. When the project is complete, the companies at Tradepoint Atlantic are expected to generate 17,000 direct and indirect permanent jobs over the next decade, accounting for an estimated $2.9 billion in regional economic impact. The capital investment is expected to approach $2 billion.

Besides a vast amount of land off I-95 that can be subdivided to suit users, the development has significant deep water frontage, with four berths that have channel depths ranging from 36 to 41 feet, and plans to increase those depths to 40 and 50 feet. It also has a privately owned and operated short line railroad with more than 100 miles of track and direct connections to Class I carriers CSX and Norfolk Southern.

In April 2017, the operators announced a 10-year agreement with Host Terminals to oversee marine cargo operations at Tradepoint Atlantic. The agreement means that Host will act as port operator for the 3,100 acre site and $30 million will be spent to improve infrastructure.

Host says Tradepoint Atlantic is the largest maritime development in the United States, with more than 1,000 acres dedicated to marine storage space and the largest private rail yard on the East Coast.

“Tradepoint Atlantic offers a unique solution to create efficiencies in the supply chain by processing goods on-site and using rail to provide a lower delivered cost to our customers,” says Host President and CEO Adam Anderson, in a statement. “ Our goal is to add value, whether it’s 50 acres for a factory on-site, a storage warehouse, or a tank. “

Find Out How Cannabis is Helping Build Greater Baltimore’s Economy

Other companies that have made early commitments to develop facilities at Tradepoint Atlantic include Pasha Automotive Services, Atlantic Forest Products, Harley Davidson of Baltimore, Access World and C. Steinweg.

“Having deep water access and rail access is a terrific advantage,” Doyle says. “It gives us an edge in the market. And then having direct access to I-95, you have a solution that doesn’t exist in most places.”

An economic study by Sage Policy Group found that Tradepoint stands to add a full percentage point to Maryland’s gross state product by 2025.

Tradepoint Atlantic will also have a commercial component. Earlier this year, the operators unveiled plans for The Shoppes at Tradepoint Atlantic, a 130-acre retail development at the “doorstep” of the property. It’s designed to serve both the employees who work at the various businesses on site and others who live or work nearby. Tenants could include a grocery store, fitness center, gas station, hotels and several restaurants.

Doyle says Tradepoint Atlantic’s timing is good because many companies are looking to cut costs by becoming more efficient and reducing expenses, and that means a lot of building.

“Right now there is a strong demand for industrial real estate, and we are hoping that it continues,” he said. “We’re really trying to position ourselves as providing cost-competitive solutions that make us attractive on a global scale.”