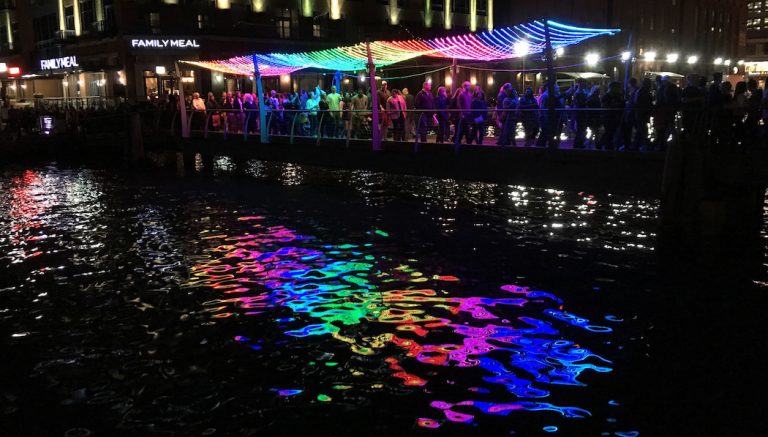 Baltimore / Courtesy of Elliott Plack under a CC 2.0 license.

Light as art, as a symbol of innovation and a symbol of unity, was at the heart of a major event in early spring 2016 that brought visitors from around the world to Baltimore.

The dazzling week-long Light City Baltimore festival showcased 29 large-scale light installations from mostly Greater Baltimore artists and included more than 100 concerts and performances, and a series of conferences and workshops that focused on innovation and entrepreneurship.

Baltimore: One of the 10 Best Baseball Fanbases in the U.S.

“When you looked left to right, people were happy and smiling. You just didn’t see people who live downtown. You saw a diverse, eclectic group of people, young and old, babies, strollers, all bundled up having a ball,” says Calvin Butler, Light City’s chair and CEO of Baltimore Gas and Electric Co. (BGE), the festival’s lead sponsor. BGE, a subsidiary of Exelon Corp., in 2016 celebrated its 200th anniversary as the nation’s first gas utility.

Light City Baltimore was conceived by avid travelers Brooke Hall and Justin Allen, founders of Baltimore marketing firm What Works Studio, as a tool for economic development, civic engagement and tourism. They teamed up with the Baltimore Office of Promotion and the Arts, Baltimore City’s official arts council, events agency and film office, and Visit Baltimore, the city’s tourism marketing agency.

“The journey to build Light City Baltimore began in 2010 with years of research into transformative events and their ability to create impact for communities,” Allen says. “In 2013, Brooke and I developed the Light City festival model and launched a multi-year, integrated marketing campaign that consisted of digital marketing, public relations, fundraising and grassroots advocacy. Light City Baltimore was born from our desire to bring a transformative experience to Baltimore that would link to the energy, innovation, creativity and passion that exists on many levels throughout Baltimore.”

Jamie McDonald, festival Steering Committee chair, says the crowd was one of the most diverse she had seen at a citywide event, accomplishing one of the main goals of the festival.

The Best Places to Eat in Baltimore

“We think that by creating an experience where the whole community can come together, and learn, and dance, and experience art, and sort of share our sense of common purpose, common humanity, we are establishing an important building block as Baltimore works on becoming a less divided city,” says McDonald, founder of Generosity Inc., a consulting firm in Baltimore that works with nonprofits, schools and community organizations to help them find and engage supporters.

Allen says the festival’s celebration of the city’s arts and cultural scene can serve as a catalyst for economic development efforts.

“Over time, we hope that people who visit Baltimore during Light City will recognize that the city is much different than how it’s portrayed in the media, and they will see the potential that we see,” Allen says. “We expect that over time people who visit during Light City will consider moving here and moving their business here. We expect that it will eventually aid in recruitment and retention efforts by local businesses and universities.”

Butler says he thinks bringing attention to Baltimore’s creative side will also drive development efforts inside the city.

“Redevelopment of a neighborhood, for example, starts with the arts community. You show me where the arts community is thriving and I’ll show you restaurants, apartments, condos and people moving in because art is a fabric of the neighborhood,” Butler says. “The festival used art as the draw, but when we got people into it, they started talking about all the great things about our city and focusing on creating solutions and not just talking about the problems of our city.”