Discover Maryland's Eastern Shore and the beauty and preservation the region boasts with charming towns, sandy beaches, marinas and wildlife. 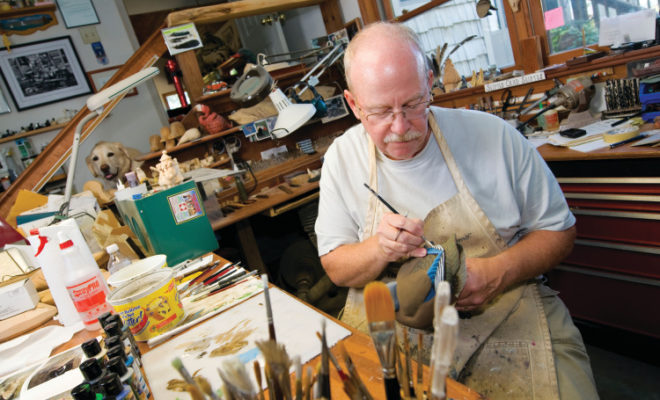 Beaches, marinas and charming villages populate the peninsula between the Chesapeake Bay and the Atlantic Ocean. Steeped in history, Maryland’s Eastern Shore embraces its Colonial heritage as well as a burgeoning visual, performing and literary arts scene.

The Eastern Shore is home to eight of Maryland’s 24 designated arts and entertainment districts. According to Pamela Dunne, program director for Community Arts Development, Arts & Entertainment Districts for the Maryland State Arts Council, “that really speaks to the desire for and focus on the arts on Eastern Shore. Each little pocket has its own identity and a different arts focus.”

“Living on the river inspires creativity, whether writing, painting or sculpture,” says Mickey Love, executive director for Dorchester Center for the Arts. “The environment and historical significance of this place leads people to create some amazing work.”

“This is an incredibly beautiful place; there is something to paint around every corner,” says  Cassandra Vanhooser, director of tourism for Talbot County. “We also have a built-in market of sophisticated residents and visitors who understand and buy art.”

Two of the county’s largest events center around art. In 2015, 58 juried artists from around the world participated in the Plein Air Easton Art Competition & Festival, an event that is the largest of its kind in the United States.

Located in the heart of the Chesapeake, Dorchester County heavily promotes the arts not just as objects to admire, but as an activity anyone can enjoy.

At the Dorchester Center for the Arts in Cambridge, adults and kids can choose from more than 80 classes ranging from drawing and painting to stained glass and performance art. As the designated County Arts Council for Dorchester County, the center offers a variety of state-funded arts programs at little to no cost.

“Some counties have multiple arts organizations,” Love says. “In Dorchester County, we are the only game in town. We feel a huge responsibility to cover the gamut: performing arts, visual arts, and instructional programs for adults and children. We try to bring as much variety to the community as we can.”

The nonprofit Chestertown RiverArts is a growing community arts center in Kent County. Its ever changing programs include exhibitions, classes, lectures and other special events. One of its programs, KidSPOT, provides hands-on learning for children up to age 12.

If every county has its own character, Caroline County’s lies deep in its rural roots. The Fiber Arts Center of the Eastern Shore in Denton features regular exhibits, quilting classes and a documentation project. The center is housed in one of Denton’s oldest buildings: the Hardee House, built around 1810. The Foundry, a community art gallery, and the Caroline County Council of Arts are located in a building on Market Street built around 1850.

“We use arts as a tool to preserve these buildings and better the community,” says Marina Dowdall, executive director for Caroline County Council of Arts.

Cambridge, Denton and other designated Arts and Entertainment districts in Chestertown, Stevensville and Elkton receive tax-related incentives that attract artists and arts enterprises to the area.

“Maryland is fifth in the nation in terms of per capita support of the arts,” Dunne says. “The state recognizes the cultural importance of the arts and its role as a strong economic engine.”

Arts and cultural events make for a lively, well-rounded community and bring revenue to downtown businesses. Residents and tourists usually pair a theatrical performance with dinner, or a gallery visit with a coffee shop break. Gallery openings often include wine and cheese, and the Eastern Shore has no shortage of either.

From original decoy carvings and dance performances to jewelry and winemaking, the Eastern Shore values creativity and history equally.

“Every community supports the arts in some way,” Vanhooser says.