The leisurely lifestyle of Maryland's Eastern Shore makes it perfect for nature lovers and outdoor enthusiasts. 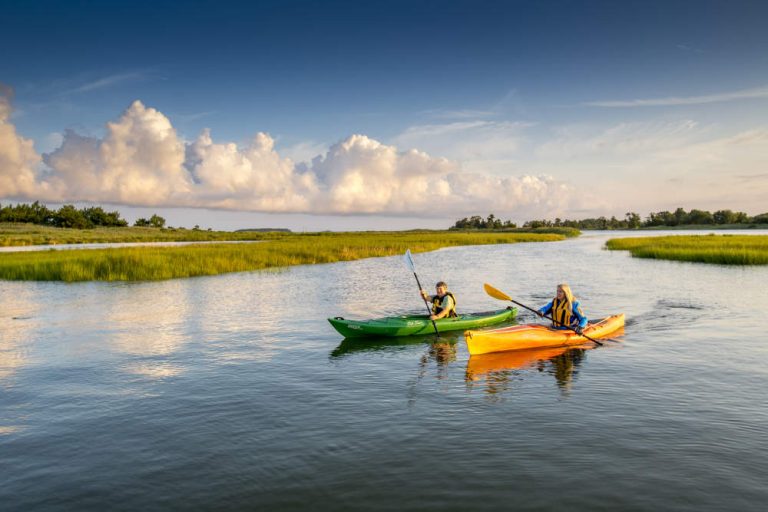 On a clear day on the Eastern Shore, you can see forever into the past. At least, it often seems that way in the Maryland Eastern Shore region, which largely maintains the same leisurely lifestyle and natural beauty that was found in the area centuries earlier.

“When you’re on a road in Caroline County, and you look off in the distance and see farmland bordered by trees, you are seeing the same thing people saw here 200 and 300 years ago,” says Kathleen Mackel, director of tourism for Caroline County. “Nothing has changed except for the occasional farm combine or irrigation system. It’s like stepping back in time. It’s very rural and relaxing.” The outdoors are indeed wonderful in Maryland’s Eastern Shore. The region is home to more than 30 parks and nature spots that offer everything from wildlife viewing and water recreation to camping, hiking and biking. There are numerous opportunities for hiking, camping and boating at Martinak, Tuckahoe and Elk Neck state parks. The area’s flat terrain makes it an excellent location for bike riders as well. And golfers can tee it up at one of more than a dozen golf courses, including Chesapeake Bay Golf Resort, Hog Neck Golf Course and Caroline Country Club, to name a few.

The Choptank River, which cuts through Caroline County on the way to the nearby Chesapeake Bay, provides opportunities for fishing and bird watching, as well as for water sports such as kayaking, canoeing and tubing. Kent County is surrounded on three sides by waterways – the Sassafras River, Chesapeake Bay and Chester River – and offers sailing, boating, and canoeing and kayaking. “The Choptank River is fabulous,” says Greg Clark with Schrader’s Outdoors, one of the oldest field guiding operations on the Eastern Shore. “There are so many things you can do on it. And as you go down the river, the boats just get bigger. You don’t have to travel far to go from really small water to really big water.” Since the region maintains a mostly rural landscape, Clark says the area is ideal for people who enjoy hunting and fishing. “You have the waterfowl – duck and geese – that come in every year,” Clark says. “The deer population here is very strong. Rabbits, squirrels and small game are also popular here. Then you have freshwater and saltwater fishing. Everything from pond fishing to catching (bass) stripers on the bay.” Popular hunting spots in the area include the 3,800-acre Idylwild Wildlife Management Area in Caroline County and the 29,000-acre Fishing Bay in Dorchester County, the largest wildlife management area and largest parcel of publicly owned tidal wetlands in the state. Hunting and fishing outings also are available through Schrader’s Outdoors, which has thousands of acres of Eastern Shore properties. In addition to deer and waterfowl, Schrader’s offers pheasant, partridge, quail and dove hunting, as well as a sporting clays course.

For those who want to get a close-up look at nature, the Fair Hill Natural Resources Management Area in Elkton offers fishing at Big Elk Creek, hiking, biking and horseback riding, permit-only hunting, guided nature tours and camping sites. Adkins Arboretum in Ridgely showcases more than 600 species of plants that are native to the region. “It’s not a cultivated garden. It’s accrued naturally,” says Ellie Altman, executive director of Adkins Arboretum. “Our gardens are wetlands, meadows, woodlands and natural features of the area.” Visitors can take a self-guided audio tour along the 5 miles of paths that wind through the arboretum. There is a second audio tour that explores the relationship between nature and the old Underground Railroad route that slaves used to travel to free states and Canada in the 1800s. “It’s a wonderful experience to walk through the woods of the arboretum and listen to the stories of freedom seekers, and how they experienced nature on their way to freedom,” Altman says. “It’s powerful because you’re listening to their voices while you’re walking through the nature just as they experienced it. In essence, the grounds of the arboretum are an important artifact of the Underground Railroad, where people can get a feeling through nature of how challenging that journey to freedom was for them.”