Maryland is the one place where it's OK to get a little crabby. 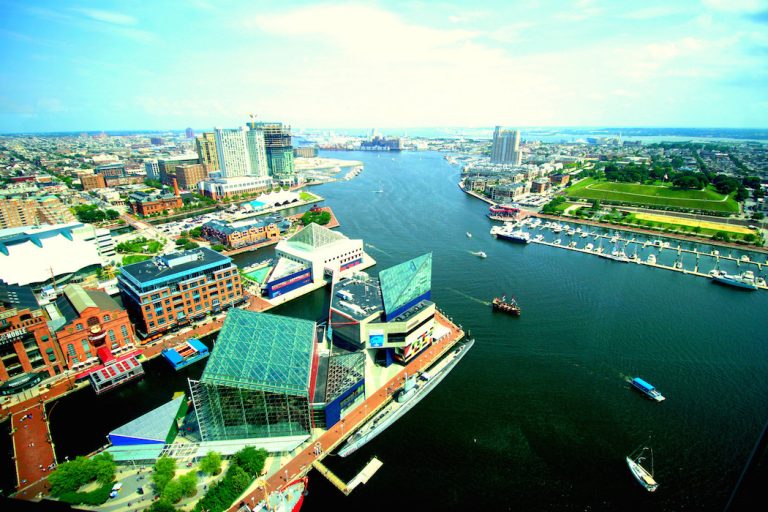 Maryland / Courtesy of Rupa Panda under a CC 4.0 license.

Maryland may be the 9th smallest state, but don’t let that deter you from moving here—it’s home to the best crabs in the world, great sports teams and beautiful landscapes. Plus, its position right next to our nation’s capital allows residents all the perks of D.C. without the pricey living.

There’s something fishy about Maryland, which is home to one of the best aquariums in the states. The award-winning National Aquarium in Baltimore has more than 17,000 specimens to keep you busy. An open ocean shark tank and a multiple-story Atlantic coral reef rank among the most popular exhibits for guests and residents alike.

Maryland natives never tire of eating crabs, whether they’re freshly caught and doused in Old Bay seasoning or mixed into one of their famous crab cakes. Because of the state’s proximity to the Chesapeake Bay, there’s no shortage of fresh blue crabs. It’s an unspoken rule here that you must know how to properly pick and eat a crab, so pick up your crab mallet and get crackin!

3. It Won’t Make A Huge Dent in Your Wallet

Location, location, location. Maryland is right next to D.C., yet you don’t have to deal with all the extra expenses that come with living in the area. Many folks choose to live in the more affordable Maryland and commute to work in our nation’s capital. According to NerdWallet, Eldersburg is one of the most affordable cities in Maryland with the median home value at $382,700 and a sizeable median household income of $101,663.

4. Maryland Has It All When It Comes to the Great Outdoors

Maryland is in that sweet spot when it comes to hanging out outdoors. It has all four seasons, plus it has your mountains, beaches, farms and big cities, so there’s something for everyone. Sink your toes into the sandy shores of the Chesapeake Bay or mountain bike along the Blue Ridge Mountains.

Maryland Has Some of the Best Places to Live in the U.S.

Maryland is home to two world class sports teams: The Orioles and the Baltimore Ravens. From football season to baseball season, Maryland residents bleed purple and orange and come together as a state to cheer on their beloved teams. And it’s no wonder they cheer—the Ravens have qualified for the NFL playoffs a huge 10 times since 2000.

Maryland’s economy continues to be one of the best in the nation, and this leads to a vast array of job opportunities, especially in the tech and trade industries. Maryland is home to many federal agencies such as the National Institute of Health and the Goddard Space Flight Center, and its prime location on the Eastern seaboard makes jobs in these industries plentiful.

7. It’s Home to the Best Hospital in America

You’ll feel a little better living near the nation’s (and one of the world’s) highest-rated hospital, Johns Hopkins. For 21 years, Johns Hopkins Hospital was ranked No. 1 on U.S. News and World Report’s annual list. Residents in Baltimore and all across the state have access to world-class care at Johns Hopkins, which also happens to be a top employer of the state.

See Which Maryland City is Best For Entrepreneurs

8. This Tiny State is Rich in History

As one of the 13 original colonies, Maryland is steeped in history. At one point in time, two of Maryland’s biggest cities, Baltimore and Annapolis, were dubbed our nation’s capital. Also note: The mysterious Edgar Allan Poe called the Old Line State his home before he was buried in Baltimore and wrote nevermore.