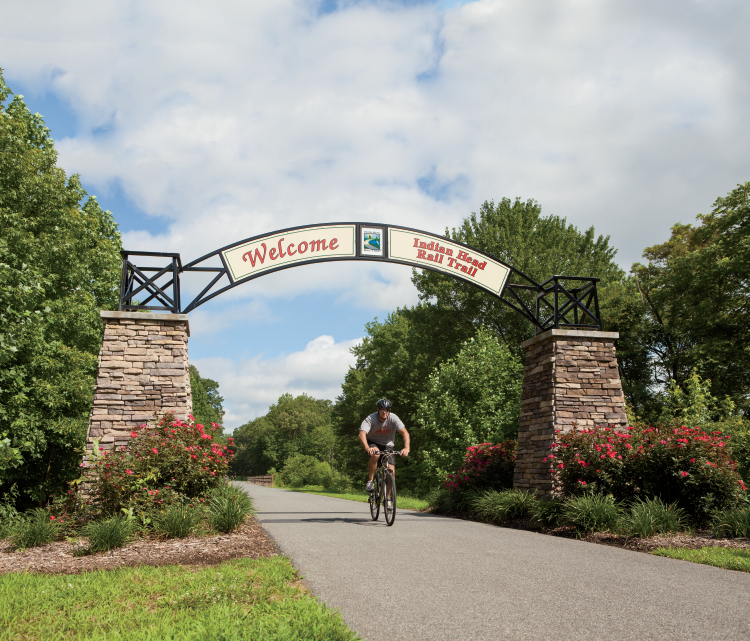 Retired electrical engineer and Charles County resident Jim Hudnall enjoys bike riding and serves as public relations director with the Oxon Hill Bicycle & Trail Club. Hudnall bikes throughout much of Maryland, but says Charles County offers some of the most scenic routes in the state.

Hudnall says he likes the pleasantries of biking in rural Charles County while still living close to big-city life in D.C., which is only 25 miles from the La Plata county seat. It’s a slower pace that draws many who choose to work in the nation’s capital city and retreat to a more pastoral setting for their homes.

“The county has rural roads with low traffic counts, and several roads lead to historic sites,” Hudnall says. “Some top riding spots in Charles County include a 13-mile Indian Head Rail Trail that features an old railway renovated into a paved bikeway, while Bryans Road is a favorite starting point for many routes of 20 to 100 miles to bike through western Charles County. For history buffs, an interesting 100-mile ‘Booth’s Escape’ covers much of the route John Wilkes Booth traveled during the 12 days after he shot President Lincoln.”

Hudnall says the club continues to grow at the same healthy rate as bicycling gains popularity locally, and more rides continue to pop up on the schedule. The club today has 500 members, some of whom live as far away as Virginia.

Other people are drawn to plentiful recreation and scenic views offered by the waterways throughout Charles County, which include the Potomac, Patuxent and Wicomico rivers. All three make lifestyles ideal for boating, fishing, water skiing, tubing, canoeing and kayaking.

The Potomac River stretches along the western and southwestern side of Charles County for more than 55 miles, with 11 public access boat launch ramps, and the river is recognized as a world-class destination to fish for largemouth bass, blue catfish and stripers. Smallwood State Park on the Potomac is an especially popular spot to catch largemouth bass.

Kayakers and canoeists also favor Charles County, and a free Water Trail Adventures brochure is available at various visitor centers and the county’s tourism office. The brochure highlights a number of rural creeks and rivers, including Mattawoman Creek and Port Tobacco River.

For hunters, Charles County has several wildlife management areas and more than 2,000 acres of public lands available to hunters. During every hunting season, Purse State Park is one of the most popular spots for outdoor adventurers hunting wild game.

Much of the rural setting in Charles County harkens to the community’s long history of agriculture, and that organic growing tradition continues today with several outdoor farmers markets. Waldorf has a couple – Waldorf Farmers Market that operates Wednesdays and Saturdays from July-November on Festival Way, and an O’Donnell Lake Farmers Market that runs every Friday from May-September at O’Donnell Lake Restaurant Park.

In La Plata, the La Plata Farmers Market & Craft Fair occurs year round on Wednesdays and Saturdays at the Charles County Government Building.