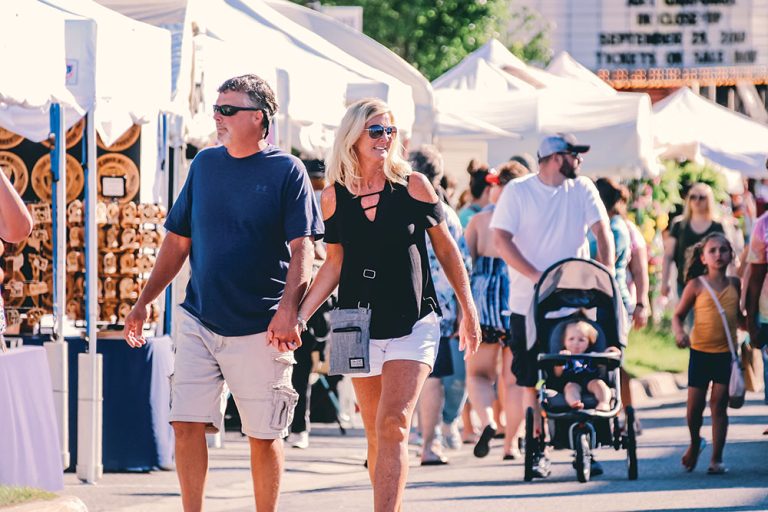 People are discovering – and rediscovering – all this region has to offer, from its beachy, resort-like environment to its affordable housing and welcoming family-friendly communities.

Today, the Muskegon Lakeshore is undergoing a renaissance with an extraordinary arts community, a strong sense of unity, rapidly transforming waterfronts, revitalized downtowns and the recent introduction of cruise ship-driven tourism.

When it comes to amenities, it’s astounding what Muskegon Lakeshore offers for the size of its population, which is about 173,656. With excellent schools, a regional medical center and heaps of recreational opportunities, the Muskegon Lakeshore is more relaxed, tight-knit and affordable than larger cities and is attracting newcomers from near and far.

Return to Their Roots

Some of these newcomers are rediscovering the area’s charms. Susan Tufts was raised in Fruitport, then lived out of state with her husband Charles for some 40 years in Hawaii and California before the couple chose the Muskegon area for their retirement in 2016. Susan says she and Charles, who retired from the U.S. Marine Corps, researched potential retirement locales throughout the world before returning to Michigan and finding so many positive opportunities. They’ve recently convinced a California friend to relocate here, too.

“The affordability of Muskegon is wonderful,â€ says Susan, who worked as a therapist. “Our home here is larger and has much more land than our home in California. I also love the ability to be close to nature here.”

Susan says there are many opportunities for retirees. She audits classes for free at Muskegon Community College (MCC), volunteers as a docent at Muskegon Museum of Art and participates in activities through MCC’s Health & Wellness Center, where she discovered a social network and learned valuable insights into her new hometown.

“The changes have been dramatic in downtown Muskegon,â€ Susan says. “The historic buildings and streets are brighter and looking better-tended. There are more people socializing and attending events in Hackley Park. And many activities and music events happen downtown – even in winter months.”

After living in seven states and 11 communities, Sue Carpenter and her husband, Scott, returned to Michigan and say North Muskegon is their top choice for raising their three children, Erin, Lucy and Ben.

“I grew up in a small town outside Detroit with tree-lined streets, sidewalks and a village square,â€ says Sue, member relations manager with Muskegon Lakeshore Chamber of Commerce. “As we were looking for places to live, we stumbled upon North Muskegon and fell in love immediately because of similar attributes. The school district here is small and quaint, yet top in academics in the state year after year.”

Sue says North Muskegon Schools represent “a melting potâ€ of cultures, and pre-K through 12th grade is housed in the same building for collaborative projects and mentorship. She adds that other highlights of living here are the beach life and easy access to the outdoors with facilities like Muskegon State Park and Muskegon Winter Sports Complex.

“We live in paradise where people come from all over the world to visit only one week per year – and we actually get to LIVE here 365 days a year!â€ she says.

Mike Lyttle and David Engblom moved from Wyoming, MI, to Fruitport in the fall of 2016, drawn by the proximity to the lake, the small-town atmosphere and the short 30-minute drive to Grand Rapids, where Engblom works as a software company manager.

“Another great benefit of living here is being able to get a home with acreage for a reasonable price,â€ Engblom says. “We were able to find our dream property and still be within a distance that’s easy to commute to Grand Rapids.”

“We love the small-town feel that Fruitport has,â€ Lyttle says.

Among their favorite Muskegon Lakeshore activities, Lyttle and Engblom enjoy fundraisers such as Dancing with the Local Stars, which raises funds for area food pantries, and other events that benefit Pound Buddies Animal Shelter and Boys and Girls Club of the Muskegon Lakeshore.

In 2019, Donelle and Kurt Johnson opened their boutique hotel, which overlooks Muskegon Channel and Harbour Towne Marina. The couple say Muskegon is the perfect place for The Pidge Inn, named after the passenger pigeons that once flocked here.

“The beautiful beaches and growing downtown make Muskegon a great place for a hotel,â€ Donelle says. “Muskegon has amazing things to do in every season, from the beaches and Michigan’s Adventure in the summer, beautiful foliage and the active downtown in the fall, and the Muskegon Luge Adventure Sports Park in the winter.”

For Donelle, who was raised in Muskegon County before living in Arizona and Chicago, this was a sweet homecoming.

“We love everything about Muskegon,â€ Donelle says. “Every year, the city and county grow with more jobs, more things to do and the friendliest people you ever want to meet.”

Always Something to Do

That growing number of recreational activities, along with a family-friendly hometown feeling are among top features that led Jonathan and Melissa Wilson to move to Muskegon from Woodhaven six years ago as newlyweds.

“My wife and I love what Muskegon has to offer, and we wanted to start our life together here,â€ says Jonathan, a regional manager with DTE Energy.

He says the area’s affordability and scenic beauty also made the decision to relocate here an easy one.

“We love living close to Lake Michigan,â€ he says. “Also, there is always something to do downtown.”