Align with the Arts 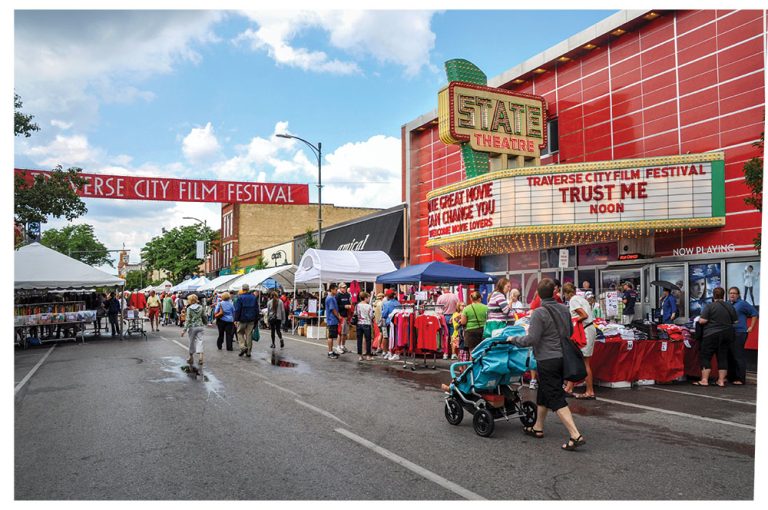 Along with plenty of natural beauty, Northwest Michigan is a top spot for arts, culture and innovation.

Its communities lay claim to cultural assets, including standout museums, theaters, galleries and music venues, and the region is home to over 950 creative sector businesses and nonprofits that employ over 3,000 people across 10 counties.

As a result, the region has fashioned a growing reputation of being both a must-visit destination and an excellent place to put down roots, especially for creatives and appreciators of the arts.

“The arts community in the region is based in tradition and inspired by the environment,â€ says Elizabeth Ahrens, president and executive director of the Crooked Tree Arts Center, which has locations in Petoskey and Traverse City and serves more than 75,000 people each year. “Hundreds of artists live in the area and can be found working in pottery, fiber, painting, sculpture, printmaking, photography, metalsmithing and wood.”

From renovated structures to events, museums and restaurants, the city of Petoskey highlights arts, culture and history.

Crooked Tree Arts Center, for example, is located inside the former Methodist Church of Petoskey, which was built in 1890. The center includes a 220-seat theater, four galleries, a teaching culinary kitchen and studios for dance, art and pottery. It is part of the downtown Gaslight District, a favorite spot for those looking to shop, eat and enjoy the arts.

The area also hosts art-themed events like Art in the Park, an annual festival that takes place in Pennsylvania Park on the third Saturday in July and features approximately 130 booths that showcase and sell pottery, jewelry, paintings, photographs and other items created by regional and national artists.

Cultural attractions are part of the charm of downtown Frankfort, a Benzie County community at the mouth of the Betsie River.

Anchoring the downtown is the historic Garden Theater, which shows classic, independent and foreign films and hosts an annual film festival. A cultural gem in the region is the Elizabeth Lane Oliver Center for the Arts, which stages more than 10 exhibitions a year and offers classes, workshops and outreach for all ages.

If you’re looking for more fun and entertainment, head south to Traverse City, home to a downtown bursting with cultural attractions.

These include The Bijou by the Bay and State Theatre, named the No. 1 theater in the world in 2013 by the Motion Picture Association of America. Also in the area is City Opera House, which features plays, musicals and comedy shows, and Old Town Playhouse, where the Traverse City Civic Players take the stage throughout the year.

In Elk Rapids, the Twisted Fish Gallery and Sculpture Garden is a must-visit destination for those who appreciate fine art.

Another art-centric community in the region is Charlevoix, where the Charlevoix Cultural Corridor, which features the Charlevoix Circle of Arts, Charlevoix Historical Society Museum and Charlevoix Public Library, which brings the community together with special events like Jazz at the Library, a free summer concert series featuring area musicians.

Downtown Charlevoix also draws art lovers with events like the Charlevoix Waterfront Art Fair and Charlevoix Art & Craft Show & Bridge Street Boat Show, which has been a community tradition for more than 50 years.

“Downtown Charlevoix is extremely walkable and has everything you need within a few blocks,â€ says Lindsey Dotson, executive director of the Charlevoix Main Street Downtown Development Authority.

“With the Charlevoix Cultural Corridor, multiple parks, fun activities like Mushroom House tours and opportunities to get creative at Cottage Pottery, downtown Charlevoix offers so much while still maintaining that small-town charm that makes us unique.”

Cadillac Commons, a park that overlooks Lake Cadillac, is the setting for the festival, which was inaugurated in 2010. Staged the fourth Saturday in September, the festival brings together brewers of Michigan beer, mead, cider and spirits in a small-town tailgate atmosphere. The event includes food, retail vendors, yard games and live music.

Founded in 2005 by Oscar-winning director Michael Moore, the annual Traverse City Film Festival is staged for six days in late July and early August to showcase independent films that don’t receive mainstream distribution. About 60 movies are screened each year, and notable guests who have attended past festivals include Madonna, Jeff Daniels, Jane Fonda and Susan Sarandon.

The Taste of Harbor Springs

Every late September as autumn begins, The Taste of Harbor Springs arrives along the Emmet County community’s waterfront to celebrate top food items from participating restaurants throughout the region. The festival observed its 25th anniversary in September 2019, and much of the ticket proceeds go toward scholarships for students pursuing culinary careers.