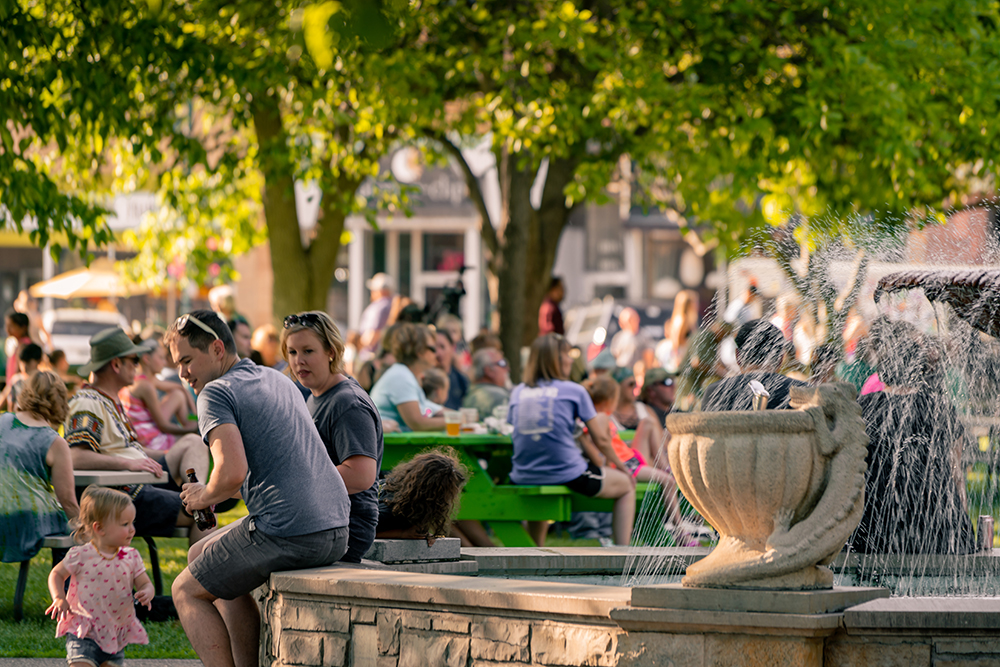 Owatonna, Minnesota, may be small (it has just over 26,000 residents), but its downtown is getting a new lease on life with the introduction of new apartment living and hotels. In turn, the uptick in new residents and visitors are supporting existing downtown retail businesses and restaurants and encouraging new ones to open.

“Owatonna is the friendliest, most inviting community I’ve ever worked in,” says Mac Hamilton, CEO of Hamilton Real Estate Group, who is behind the development of the new apartment and condo housing and hotels in the area. “It’s been a privilege to be involved and to help them grow — it’s been a great experience.”

Like many quaint downtown centers across the country, Mainstreet Owatonna is experiencing a revival. The Owatonna chamber of commerce has spearheaded a number of projects to beautify the area, like public art, seasonal flowers and other initiatives to draw attention to the historic area. Most of all, Owatonna’s long-standing businesses are proud to be cornerstones of downtown and excited to welcome newcomers to the places that have been loved and lived in for decades. Their passion to bloom where they were planted is proof of the deep roots in the community.

One great example is Costas Candies, which celebrated its 100th birthday in 2019 and has been a family-owned confectionary since 1919. It still operates in its historic location and uses the same time-honored recipes that have been passed down through generations (along with the same creme beater and marble table) to make sweets. In addition to ramping up its online store (where buyers from around the world have been ordering candy), Costas turned pandemic closures into an opportunity to remodel and update the confectionary. The restaurant space was closed while its production space was expanded. The project — from taking the walls down to the studs while preserving charming elements like its tin-tiled ceilings — has been chronicled on Instagram and Facebook so fans near and far can see the transformation.

As with many cities, the downtown revival has renewed interest in urban living and a walkable lifestyle. Several apartment complexes are located a stone’s throw from the downtown core, including Rose Street  and Northgate Apartments, both on Rose, and The Gateway, located at the corner of Rose and Hoffman.

111 Vine is a 54-unit luxury apartment building opened in June 2019 that includes retail on the ground floor and a stunning walk-out rooftop terrace view.

A number of projects are taking place simultaneously that will transform several blocks downtown, including construction of a new 106-room Marriott Courtyard Hotel, a 43-unit apartment complex on Pearl Street and a streetscape project. The project includes the demolition of some buildings and the renovation of others. The apartments and hotel, being developed in tandem by Hamilton Real Estate Group, are expected to open in June 2022.

The North Cedar Avenue Streetscape Project will make improvements on three blocks between Central Park and Rose Street. It includes new sidewalks that are wider, safer and ADA compliant; improvements to multi-modal transportation and traffic flow, the addition of energy-efficient street lighting, and the addition of trees, garden beds, seating areas and signage. The roadway will also be resurfaced and there will be public parking improvements. The entire undertaking is designed to bolster Owatonna’s identity and history by creating a vibrant and energetic downtown area.

In addition to the flourishing retail, restaurant and brewery scene, several major employers in Owatonna are located downtown, making it possible to live and work in close proximity. More than 2,000 jobs are located in the downtown area. Jostens and Federated Insurance, the city’s largest employer, have offices downtown, plus there are career opportunities with banks, restaurants and retail shops.

The Owatonna Commercial Historic District, which comprises 75 properties across portions of 12 city blocks, was listed on the National Register of Historic Places in 2015.

Owatonna’s historic downtown is being revived with new restaurants, boutiques and bars, adding to its charm. There’s plenty to do to experience the Owatonna area.

A short stroll down the block will transport you to the other side of the globe at Pupuseria La Paz, serving a robust menu of Salvadoran and Mexican specialties. Standout options are pupusas, pancake-like rounds stuffed with savory fillings like meat, beans and cheese, along with tacos and sopes.

The craft brewery craze has also reached Owatonna, with two local microbreweries — Mineral Springs Brewery, named for the spring water that local legend credits for healing Princess Owatonna centuries ago, and Foremost Brewery Cooperative, which like the name suggests, operates on a co-op model.

How a Minnesota Brewery Is Building Community Through Beer

Owatonna Shoe has been around since 1947, when a post-WWII economy was flourishing across the country. The family-owned store is celebrating its 75th anniversary as owner Tom Brick (who took over the business from his father) trains his nephew to take over when he retires — and they hope to continue serving Owatonna for as long as people still have feet.

“It’s nice to keep it in the family, and we aim to keep going for another 75 years,” says Brick. “We’re going to make that happen — I was born and raised here — I started thinking about all my friends and the people who have moved away, and I realized I live nine blocks from where I grew up! Even when I went to college, I was there Monday through Thursday but came home on the weekends to work at the store.”