How a Minnesota Brewery is Building Community Through Beer 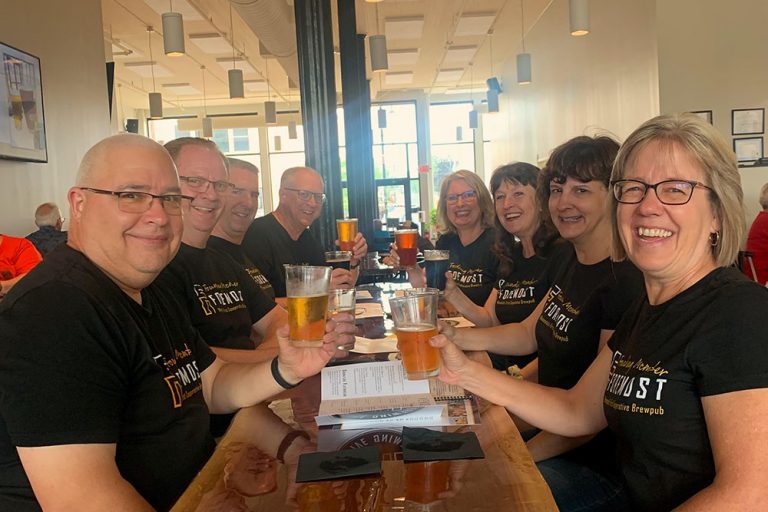 Several years back, during a community visioning process to help shape the future of Owatonna, Minnesota, civic leaders gathered input from the public, asking: “What’s missing from downtown?” The desire for a brewery kept bubbling up. That sparked an idea — wouldn’t it be cool if Owatonna had a brewery cooperative that’s owned by the very community that’s interested in having one?

From there, the pursuit of hoppiness began.

Founded in 2017, Foremost Brewing Cooperative opened in November 2020 inside a spacious historic downtown building that once housed a popular department store. The cooperative today has 600 members. While you don’t have to be a member to enjoy beer from Foremost’s 20 rotating taps or the tasty paninis and flatbreads on its menu, the $200 annual membership comes with exclusive perks like special happy hours and discounts on event space rentals and, eventually, dividends.

Foremost has become an integral part of Owatonna’s flourishing food and beverage scene, which includes a forthcoming wine lounge and another downtown brewery. Mineral Springs Brewery, which opened in 2019, has 14 taps with beers and seltzers that it brews. Staples include cream ale, lager, hazy IPA, west coast IPA, Scotch ales and more.

“Nearly everyone’s palate can find a happy place from one of our 14 taps,” says Mineral Springs Brewery President Bill Cronin.

The brewery, Cronin says, builds community by bringing together families, couples, friends, co-workers and community members to have conversations over beer. The brewery also hosts fundraisers and community events. And, in the winter months, Mineral Springs offers a half dozen igloos on the patio to provide a unique (and cozy) gathering space.

To learn more about the community-focused beer scene in Owatonna, we caught up with Foremost Brewing Chair Nate Sherwood. He shares what he loves about life in Southern Minnesota and also reveals the beer he’ll be pairing with pumpkin pie this holiday season.

How does Foremost Brewing build community?

Charity is a big focus for us. We’ve been involved with quite a few local charities — Habitat for Humanity, CulturFest, Big Brothers, Big Sisters. We like to be a part of their events and vice versa. Mineral Springs Brewery is our friendly competitor, and we’ve done a collaborative beer together for Community Pathways. We brewed a batch of beer for their fundraiser and, instead of, say $1 from every pint going to charity, Community Pathways was able to keep 100 percent of the proceeds.

We also like to bring people into Foremost for concerts and events. We are a family-friendly space, so our food and drink offerings have a little bit of everything for everyone from our own root beer to our beers to our wine and cocktails. We have various types of food and a kids menu.

Breweries are a great gathering space. What kind of events do you do?

We do monthly trivia and are going to start doing some cribbage tournaments on Sundays and have live music every Saturday. Our membership happy hours are Thursdays, so that gives us a chance to do fun events for our members.

We want to work with the city to get some outdoor seating at our place. There’s a lot of cafe-style breweries in surrounding communities. We also want to expand our beer styles and music scene and get on some of the beer passports to get people down here in Southern Minnesota. 2020 was such a strange year. We’re really looking forward to normality and building community and reconnecting people.

What types of beers does Foremost specialize in?

Being new, we’re still finding our footing a little bit on what our specialty is. Our brewer, Terrence Flynn, is well-versed in traditional styles of Irish and German beers, but he’s been having some fun experimenting, too. We always have a stout on tap and some Belgian-style beers, as well as some English milds. Bob’s Bad A** Bok might have been one of my favorites. (It’s named for Terrence’s dad, who taught him how to brew.) Terrence has been doing more sours in recent years, and it’s been a pleasant surprise. We’ve gotten great feedback. We’ve got sours in strawberry, blueberry, lemon-lime and a guava-mango one coming up.

What do you enjoy about living in Owatonna?

I was pretty young when my folks moved here. I went to high school in Owatonna, and there was a small-town feel here when I was growing up. I went off to college, met my wife, and we came back and are raising our family here. With the amount of companies that are now here and the great school system that we have in Owatonna, the community has been growing exponentially in the last 10 years. It’s been really cool to see people bringing fun things to town, and all the amenities and community events that come with that involvement. There’s a true sense of pride and community here.

What beer will you be pairing with pumpkin pie this season?

I love pumpkin pie in the mornings with coffee. We make a really good coffee stout with a local partner in town that roasts their own coffee beans. I’m hoping Terrence will be bringing that back. A coffee ale would be good, too!