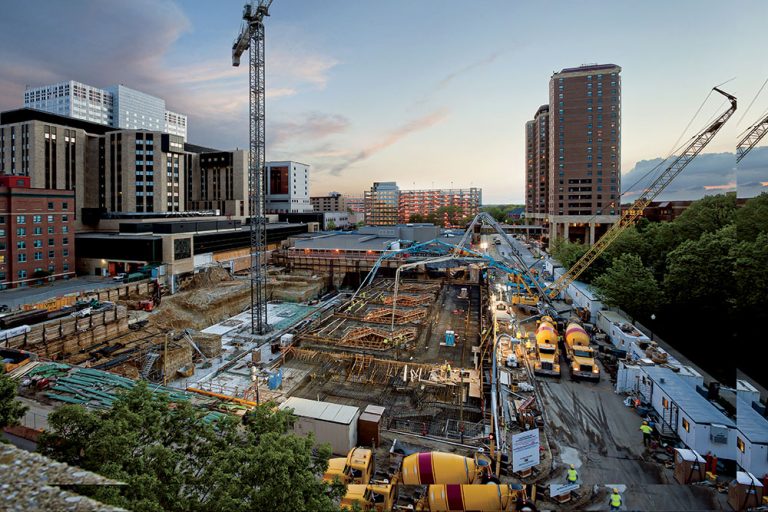 Hear that noise? It’s the sound of transformation occurring in downtown Rochester over the next two decades.

In 2013, the Minnesota legislature approved $585 million to be invested over the next 20 years for the Destination Medical Center (DMC) project, a development to make downtown Rochester a global hub and destination for health and wellness. Besides the $585 million in state money, nearly $6 billion will be invested by the Mayo Clinic, private investors, and the City of Rochester.

“In March 2017, a major threshold was met with the securing of $250 million from Mayo Clinic and other DMC developers, meaning that funding from the State of Minnesota for the project would now begin,” says Rob Miller, president of the Rochester Area Chamber of Commerce. “We are a city of 100,000 residents that welcomes 3 million visitors a year largely due to the Mayo Clinic, and the goal of the DMC initiative is to eventually welcome 6 million to 7 million people a year.”

DMC plans include Mayo Clinic constructing some new downtown facilities for itself, while several plots of land will be used for office space and to house biotech and pharmaceutical firms. DMC will also bring in more housing, retail, restaurants and hotels to accommodate visitors as well as the tens of thousands of new employees who will work in downtown Rochester as a result of the expansion.

“Already in the works is a 19-story Hilton hotel that broke ground in December 2016, that is expected to open in late 2018, and recently announced is a $100 million housing and commercial development next to the Mayo Clinic’s Saint Marys campus,” Miller says. “In addition, work has begun on a downtown area called Discovery Square that will become the new address for future biomedical, research, education and technology innovation.”

Why Rochester is one of America’s Best Places to Live

The overall development of DMC will include investments in several downtown sub-districts, including the Downtown Waterfront, Central Station, Discovery Square, University of Minnesota-Rochester and the Heart of the City, which includes the Mayo Clinic campus. Additionally, new neighborhoods are being planned around the city to accommodate people who will need housing to fill the 25,000-45,000 jobs expected to open over the next 20 years.

There are currently more than a dozen projects totaling $700 million under development or in the planning stage. Rochester officials say they are receiving interest from real estate investors and developers from countries around the world, including China (Hong Kong), India, Saudi Arabia, United Arab Emirates and Venezuela.

“With the momentum of the DMC effort, we will also look to grow other sectors like manufacturing, information technology, food processing, hospitality and tourism to provide Rochester with a dynamic and diverse economy,” says Gary Smith, president of Rochester Area Economic Development Inc. “There is another initiative in Rochester called Journey to Growth, or J2G, that is focusing on those other industries to take advantage of the DMC growth.”

Check out our photo library of Rochester, MN

Smith points out that whenever visitors travel to Rochester for treatment at the Mayo Clinic, about 70 percent of their visit is free time away from the clinic.

“Much of DMC will be about making sure that dollars are invested in a way that supports the overall experiences that people have in Rochester,” he says. “That’s why hotels will be built, Peace Plaza will expand, and more restaurants, stores and entertainment venues will open. The goal of DMC is to make downtown Rochester an exciting place to work, live, shop and play as well as a place to heal.”

Smith adds that Rochester officials are also encouraging potential entrepreneurs to take their shot at starting a business to ride the momentum of DMC. To help entrepreneurs start companies, accelerators in the community include Collider Coworking, Mayo Clinic Business Accelerator and the Rochester Area Foundation Non-Profit Incubator.

“Startup companies for entrepreneurs could be in health-care-related fields as well as hospitality, service, recreation, manufacturing and much more,” he says. “This is an exciting time in Rochester, with many excellent economic opportunities in our bright future.”