10 Places to Live Near Minneapolis 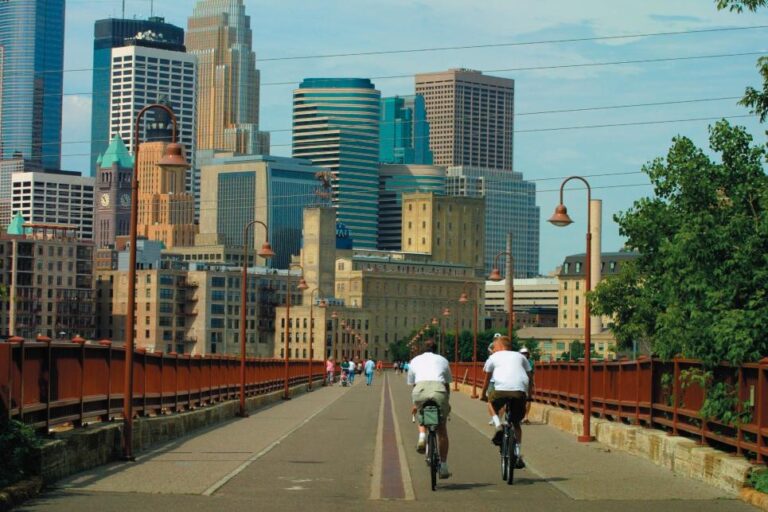 Minneapolis collects accolades like a child’s tongue collects snowflakes, including a featured spot on our list of Top 10 Cities for Recent Graduates. World-class restaurants, museums, live theaters, hospitals and universities combine with diverse recreational opportunities, top-quality schools, a reasonable cost of living, and robust public transportation. Residents in nearby communities share in both use and pride of the area’s cultural, civic and natural resources. Eagan, Brooklyn Park, Plymouth and Apple Valley are popular suburbs that show up in “best of” city rankings. Here are some additional places to live near Minneapolis:

Eden Prairie: Eden Prairie has more than 120 miles of bike trails, 13 miles of nature trails and more than 10,000 acres of designated parks and open space. It’s a prosperous suburb that’s home to major regional employers and considered a “top-earning town,” with median family income and median home prices above the metropolitan average.

Coon Rapids: Coon Rapids is among the communities investing in reinventing itself to provide what new, young families want including walkable amenities and more attractive commercial thoroughfares. In 15 years, the city spent $20 million on land, demolition, cleanup and business relocation, much of it along Coon Rapids Boulevard. Homeowners can receive $5,000 renovation grants, and residents in late 2013 approved spending $17.4 million to upgrade parks and connect trails.

Chanhassen: Chanhassen placed fourth among “America’s best small towns” on CNN Money’s Best Small Places to Live roundup in 2013. Chanhassen, with a population of fewer than 25,000, is home to the 1,137-acre Minnesota Landscape Arboretum, 34 parks and 90 miles of trails. Chanhassen Dinner Theatres, which opened its doors in 1968 on the site of former cornfield, remains the largest Equity dinner theater company in the U.S., and routinely hosts world premiers.

Woodbury: A fast-growing community southeast of Saint Paul, Woodbury is near 3M, the state’s largest private employer, and the St. Croix River Valley. A network of trails connects residential neighborhoods, many of them high-end. Recreation is a community priority, with the Bielenberg Sports Complex as the crown jewel. A $21.8 million expansion/renovation features a larger field house, outdoor ice rink (Bielenberg has two indoor ice rinks already), and full-service restaurant and party venue. Minnesota United FC, a professional soccer team, will use the new facilities for year-round practice, and the upgrades include Minnesota’s first inclusive playground where people of all physical and development abilities can play.

St. Cloud: Thirty years ago St. Cloud was not considered part of “The Cities.” Steady growth in St. Cloud itself and suburbs northwest of Minneapolis has closed the gap. Some commuters make the 130-mile round-trip to work but most residents work closer to home and enjoy life in a smaller city with its own university, a vibrant downtown and hip Paramount Arts District. Cost of living is low; access to recreation and other amenities is high.

St. Paul: The twin in the Twin Cities, Saint Paul no longer is fighting an inferiority complex. Downtown bustles with new development, including mixed-use converted warehouse spaces and condominiums along the Mississippi River. Downtown Saint Paul boasts world-class restaurants and museums, including the Minnesota Children’s Museum and the Science Museum of Minnesota. Across the river and a short walk from downtown, Harriet Island hosts major festivals such as the St. Paul Winter Carnival, with its huge ice sculptures, and the Minnesota State Fair, also takes place in Saint Paul.