Asheville, NC: A City for the Best Craft Brewers

Whether it's the water or the altitude, Asheville inspires craft brewers and brews of many tastes 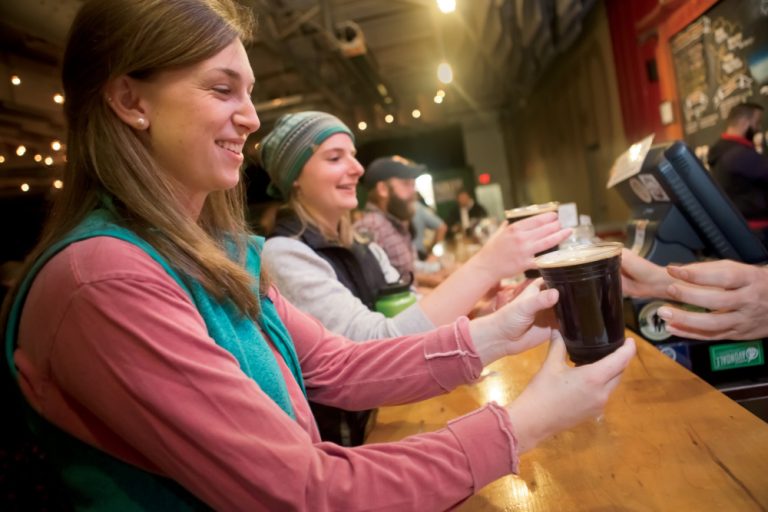 About 35 breweries are enjoying success in Asheville, and craft beer production accounts for more than 60 percent of the city’s entire beverage industry. Nearly 2,500 jobs are part of the brewing sector, but not just connected to brewery operations and tap rooms.

For example, Vortex Doughnuts in Asheville offers a donut called The Rotating Tap that uses a local beer to flavor the caramel sauce and is topped with peanuts, pretzels and beer malt crumble. BROO is an Asheville company that uses local beer in its line of hair care and grooming products, now sold at national retailers like Bed Bath & Beyond, Target, Walmart and Whole Foods.

Discover Why Asheville, NC is a Top 100 Best Place to Live in America

The industry is still mostly brewers and taprooms, however, and more companies are specializing. That includes Riverbend Malt House, which only produces malt that it sells to local brew companies.

“Malt is a core ingredient that comes from grain like barley, rye or wheat, but the best malt always originates from countries like Canada, the Czech Republic, Germany and the UK,” says Scott Hickman, CEO of Riverbend Malt House. “But years ago, the Riverbend founders wanted to get into the craft brew industry but from a different approach, so they decided to only produce the best-possible malt on the market. They wanted to produce it in Asheville.”

Hickman says Riverbend purchases all its grain from farmers within a 500-mile area, and even the Biltmore Estate grows barley used in the company’s malt.

“We supply more than 100 customers, including local breweries like Sierra Nevada, New Belgium, Wicked Weed, Burial and Hi-Wire,” he says. “We also have customers in Virginia and Kentucky and continue to grow.”

“We currently have nine employees and expect to increase our sales by 300 to 400 percent in 2018,” Hickman says.

The Science of Fermentation

Another beer-related company specializing in one product is White Labs Asheville, a San Diego-based company that established a sister operation in Asheville in 2017. White Labs, a leader in yeast production and fermentation science for the brewing and winemaking industries, has 65 employees at its Asheville operation.

“We were attracted to this city to be closer to our East Coast customers, and we wanted a place where city officials are behind us,” says Lisa White, vice president of White Labs. “We received great support from the economic development people and the Asheville Brewers Alliance, plus the city has great hiking, biking, tubing, arts and cuisine lifestyles that the craft beer industry likes to get behind.”

White says she also likes that Asheville-Buncombe Technical Community College has its own brewing, distillation and fermentation program, where graduating students receive an associate’s degree in applied science.

“Asheville is traditional but embraces innovation and technology, and they welcome entrepreneurs,” she says. “Since opening in Asheville, we also opened a White Labs Kitchen & Tap restaurant that features fresh foods and 25 taps of craft beers.”

Find Out How Asheville has become a Hotspot for Top Talent

Join Us for Brunch

Also promoting the local craft beer industry is the Asheville Independent Restaurant Association (AIR), which has 120 members throughout Buncombe County. The main role of AIR is to help area restaurants be more successful by getting barriers removed.

“AIR was a key player in the getting the North Carolina Brunch Bill passed in Asheville in 2017, which changed the law that previously prohibited restaurants from serving beer and alcohol on Sundays before noon,” says Jane Anderson, Asheville Independent Restaurant Association executive director. “Now, restaurants can sell beer and alcohol beginning at 10 a.m., which is huge for the brunch industry. Brunch is very big business in Asheville.”

Anderson says almost all restaurants in Asheville serve craft beer, which has helped the area industry boom over the past five years.

“Most area restaurants try to support our local brewers,” she says. “We have a great hospitality industry in Asheville, and the craft beer sector plays a big part.”