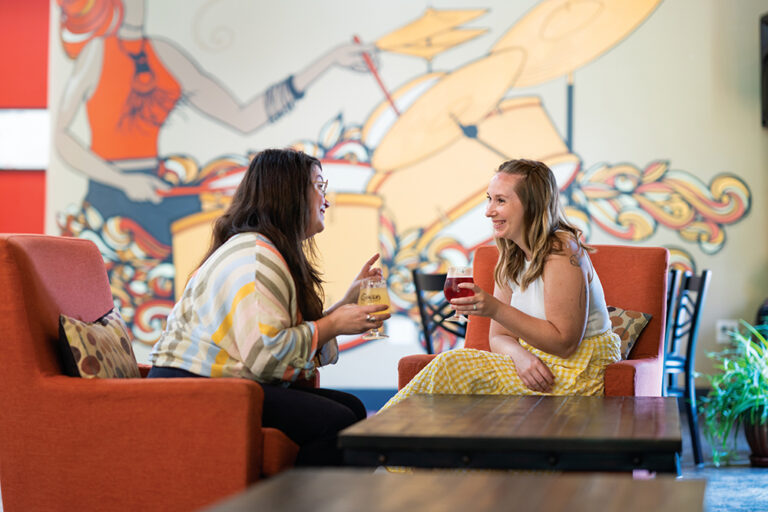 Asheville’s attributes make it a great place to live and an ideal location to launch a business.

“There’s an independent spirit here. That can be contagious and certainly attracts like-minded folks,” says David Ackley, co-founder and CEO of Ginger’s Revenge, a business he launched with his wife, Cristina, in 2017.

Ginger’s Revenge, which brews and serves ginger beer, started in the Ackleys’ home.

“We decided to move to Asheville because it grabbed hold of us with the beautiful location and wonderful community,” David says. “We served our ginger beer at local homebrew events and were astonished at the positive reception.”

Before Prohibition, alcoholic ginger beer was just as popular as ales and ciders, David says. Ginger’s Revenge is one of only a handful of companies in the U.S. dedicated to reviving this historic beverage.

“Asheville is also a community where people want to live. It’s a beautiful environment with a focus on health and wellness here,” says Cristina Hall Ackley, president of Ginger’s Revenge. “Entrepreneurs often look to start a business where they want to create a life — at least, that was the case for us. I can’t imagine having started our business in another place other than Asheville.”

Ginger beer of the nonalcoholic variety is the pursuit of Devil’s Foot Beverage Co. in North Asheville, a company started in 2017 by friends Jacob Baumann and Benjamin Colvin. Devil’s Foot produces ginger beers and fruit sodas with a fraction of the sugar as other brands.

“My wife and I found out we were pregnant,” says Colvin, the company’s president. “We took a bunch of friends out to celebrate, but there wasn’t anything exciting for a pregnant woman to drink as a celebratory toast. We noticed there weren’t many delicious options around town for people who can’t drink or don’t want to drink. We started making ginger beer in the backyard because we knew we could make something better.”

Starting their business in Asheville has paid off, he says.

“Asheville has many advantages when it comes to entrepreneurship, but I’d say the biggest benefit is the available resources,” Colvin says. “Everyone is connected one way or another; reaching out and working with others has been the best way to find what we needed to grow.”

Moonlight Makers, a custom-printing business that sells creative T-shirts and houseware items, among other things, was launched in February 2015 by friends (and neighbors) Claire Watson and Nicole Hairfield.

Initially, they sold their items online, at festivals and pop-up shops before moving their business into a 4,500-square-foot photography studio in 2017.

“We came up with an idea for a local Etsy to support the people here that didn’t have time to sell for themselves,” says Hairfield, chief creative officer of Moonlight Makers. “We bought a small bus and took it to festivals. But it became difficult to get inventory from our makers, so we decided to make things ourselves. Claire and I learned how to screen print on our kitchen counters, and it grew into what it is today.”

“Asheville has many advantages when it comes to entrepreneurship, but I’d say the biggest benefit is the available resources.”

Their products are sold in 1,000+ stores nationwide and on six different channels.

“I can’t imagine doing this anywhere else. Being in Asheville, the local people are so supportive of small businesses. Without the community’s support, there’s no way we could be where we are,” Hairfield says.

Gem of a Business

Elisa Van Arnam and Allison Blake birthed SoulKu, a jewelry business that employs local stay-at-home moms who handcraft each piece from home on their own time.

“We created a card set and ordered 20,000 units only to find out we couldn’t sell them,” says Van Arnam, chief creative officer of SoulKu. “We came up with the idea of making a simple piece of jewelry to add. I was studying the healing properties of gemstones, so we decided to put a gemstone bead on a cord.”

An agency in Southern California found SoulKu online and wanted to represent the product.

The business then evolved to a new, purposeful business model that supported stay-at-home moms. “We started to get orders and asked our stay-at-home mom friends if they wanted to help. So we very organically created this business model,” says Van Arnam. “We now have about 30 stay-at-home moms who come into our office, pick up a box of raw materials and an order sheet, and take it home to create on their own time.”

If you’d like to learn more about the Asheville area, check out the latest edition of Livability Asheville, North Carolina.