Cold beer is a hot item in Asheville. 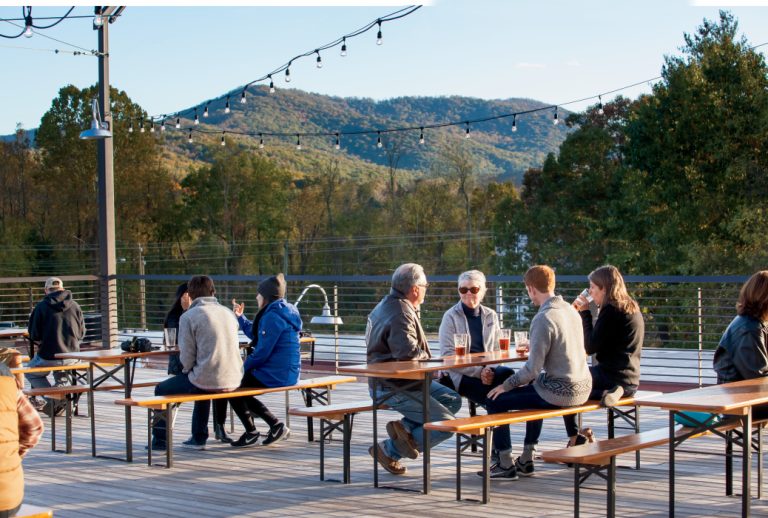 When a beer is poured quickly into a glass, it inevitably will foam up and cascade over the rim. That’s basically what has happened in Asheville to the craft beer industry, which has grown so rapidly over the past decade that the town has become a thriving beer destination and manufacturing center, with more breweries per capita than anywhere else in the United States.

As of September 2016, there were 24 breweries operating in Asheville and Buncombe County – approximately one for every 10,000 residents – with several more being planned.

“You can’t throw a rock around here now without hitting a brewery,” says Jeff Irvin, director of the Craft Beverage Institute of the Southeast at Asheville-Buncombe Technical Community College. “Everyone is finding their niche and making great, high-quality products. This is becoming a top destination for quality craft beverages. There’s nowhere else in the country where you can visit this many breweries in one day. It is the destination for people who want to try a lot of different kinds of stuff in a small area.”

From Hobby to Big Business

Asheville first tapped into the craft-brewing craze in 1994, when retired engineer Oscar Wong opened Highland Brewing Co. “as a hobby” in the 3,500-square-foot basement of Barley’s Taproom in downtown. Within eight years, the company was brewing twice a day, four days a week, and producing enough beer to fill more than 7,000 12-ounce bottles per hour. Today, the brewery operates out of a 70,000-square-foot facility with the capacity to generate more than 50,000 barrels of beer annually, and has opened a two-level event space that can hold a total of more than 1,000 people for private parties.

In recent years, the craft-beer industry in Asheville as a whole has grown right along with Highland Brewing. Jobs in the industry have increased 558 percent since 2010, and breweries currently make up approximately 62 percent of beverage manufacturing in the Asheville MSA.

“The changes in Asheville from when my father started this company have been vast,” says Leah Wong Ashburn, who has been family owner and president of Highland Brewing since 2011. “People in Asheville have embraced brewing and beer and the culture that comes with it. There is a celebratory aspect of beer. It connects locals to visitors and to other locals. It’s part of the quality of life that attracts people to Asheville.”

In 2009, when there were still only nine craft breweries in the area, Asheville tied for first place in the inaugural Beer City USA poll along with the much larger city of Portland, Oregon. Asheville went on to win the title each of the next three years, spurred in part by the steady increase in the number of breweries and beer festivals – led by the annual Brewgrass Festival – popping up in the region.

This, in turn, caught the attention of several national companies that have expanded their operations into the Asheville area. For example, New Belgium Brewing Co. of Colorado, one of the largest craft brewers in the country, opened a brewery and distribution center in 2016 next to Asheville’s River Arts District. California-based White Labs – a leading provider of the yeast supplies needed to manufacture beer – recently opened an East Coast production facility in Asheville.

“Asheville is becoming like Detroit for the automobile industry or Silicon Valley for technology,” says Adam Charnack, president of Hi-Wire Brewing, which in three years of operation has expanded from a 3,000-square-foot facility to 27,000 square feet. “There is a synergy effect around here in the beer industry, broadening the appeal to more and more people, which is what helped us get to the next level so quickly. And now companies like White Lab are seeing the amount of beer coming out of Asheville – over a million barrels a year – and they’ve decided they want to be part of what’s going on here.”