Using concentric circles is helping some find their center. 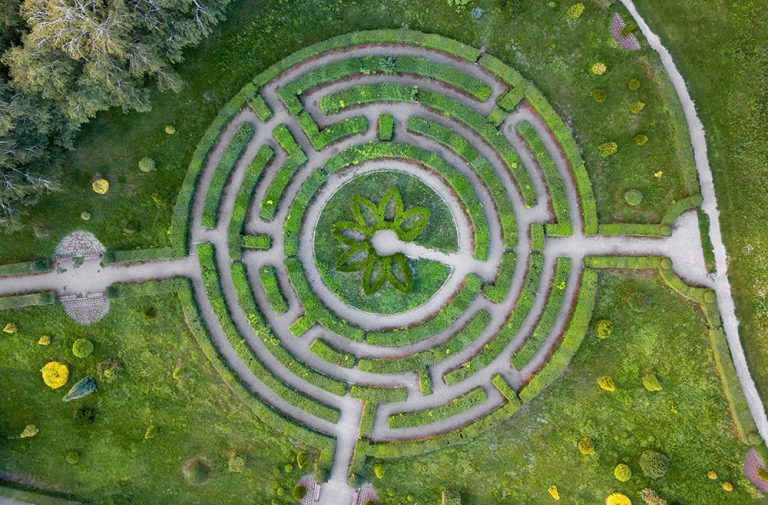 Who knew that walking in concentric circles could lead you to (find your) center? Enter the emerging self-practice of labyrinth healing, which is exactly what it sounds like. Asheville has at least nine of these locations where you can experience this ancient form of walking meditation. Read on for more interesting facts on how labyrinth healing just might point you in the direction of your True North.

1. First things first, labyrinths and mazes are not one and the same. While a maze is a “competition between maze-maker and maze-walker so you can get lost,â€ denotes Chuck Hunner, founder of the Asheville Labyrinth Society, a labyrinth is unicursal – it has only one entrance, one path – and the path within is the same path out.

2. In only 15 years, the Worldwide Labyrinth Locator database has listed more than 5,700 labyrinths (including a few mazes) in more than 80 different countries around the world. That number keeps growing every day. There are at least 9 labryinths here in Asheville, which should come as no surprise given our long history as a mecca for natural healing. For the list, visit labyrinthlocator.com.

3. Labyrinth origins remain enigmatic, but the mysterious spheres were commonplace during the Roman Catholic paradigm and many can still be traversed all throughout Europe. Of the original labyrinths, Chartres Cathedral (situated on the outskirts of Paris) is the most complex – with 28 180-degree turns–and infamous of all labyrinths.

4. Transatlantic voyage not on your imminent agenda? There’s a perfect 11-circuit replica at the Kanuga Episcopal Retreat Center outside of Hendersonville built by Robert Ferre, who has hand built more labyrinths than anyone alive.

5. The winding of modern labyrinths begins with reverend-psychotherapist Lauren Artress of Canon of Grace Episcopal Cathedral in San Francisco. In her book, Walking the Sacred Path (1995), she writes that the labyrinth experience is cumulative. Each walk (through the same labyrinth) unveils a new layer of the personality, shining a light on our shadow(s), and allowing us to see things clearly.

6. Labyrinths have an ever-evolving typology with varying circuitry (an identifying feature). The classical baseline labyrinth is that of a seven-circuit design, which goes in hand with Gurdjieff’s cosmology law of seven (or law of octaves), denoting that any phenomena (or cycle) evolves in seven steps, bringing order to chaos.

7. The labyrinth is the ultimate mirror; watch for what sensations, thoughts, feelings, and all else that arise, as they are metaphors for the current narrative(s) playing themselves out(side) of the labyrinth–in life.

8. Labyrinths are right-brain stimulating (hello, creativity and intuition), thus activating a whole brain circuitry connection. Artress believes that the degree of right-brain activation is enhanced by the number of circuits and narrowness of the path. In other words, the more narrow, the deeper the concentration.

9. “Thousands have reported spontaneous healing of trauma,â€ says Hunner. In fact, Turning Point Consultants out of Hunstville, TX, is doing work with veterans who have significantly reduced their PTSD by leaving the trauma in the labyrinth.

10. Hunner suggests getting ritualistic “if you really want to find things within you had no idea were there.â€ His tip for beginners: At the entrance, turn left and walk the outside to set an intention while introducing yourself to the labyrinth. Then take that inside and hold the mantra till you lose it. Upon exit, walk left (counterclockwise in opposite direction) to unwind yourself and the experience.

“If you’re looking for data, it’s not quite all there yet,â€ Hunner says. “Labyrinths are magic, and science hasn’t caught up with magic.”