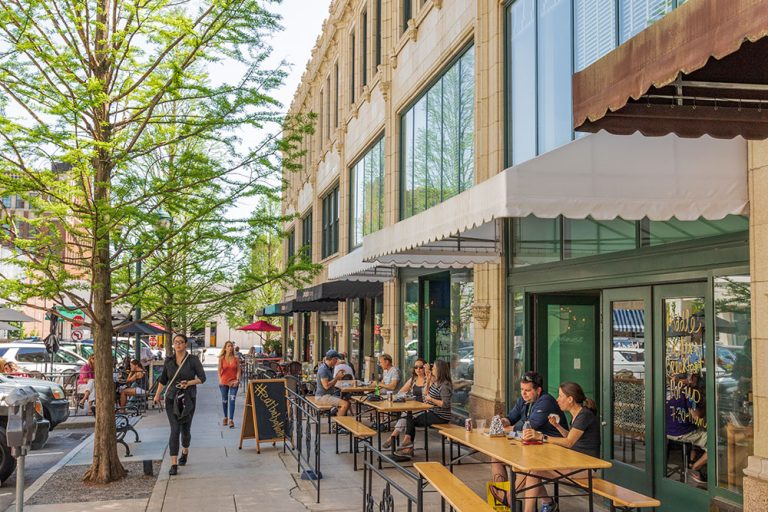 Asheville has a moderate climate, widely celebrated arts scene, good transportation network and the beauty of the Blue Ridge Mountains, just to name a few top assets. This is a place for beer lovers, too: Asheville is known as “Beer City USA” for its nearly 35 microbreweries. The city is also known as “Foodtopia,” as its culinary scene includes over a dozen farmers markets and more than 250 independent restaurants. Here are five of the area’s most popular neighborhoods:

How Asheville Became a Hotspot for Top Talent

The city’s main tourism attraction is Biltmore Estate, which remains as majestic as when it first opened in 1895. Around the spacious estate is Biltmore Village, which originally served as a community for George Vanderbilt’s estate workers and today features many hotels and a central shopping district. Bordered by Biltmore Village on the north end is South Asheville, known for its shopping and close proximity to the Blue Ridge Parkway. South Asheville also has excellent ethnic restaurants.

With a variety of architectural home styles, West Asheville is a quirky neighborhood that is becoming a popular place to visit. West Asheville has a mini-downtown area of its own, and the neighborhood’s main street – Haywood Road – has several shops, restaurants and pubs. Between West Asheville and downtown is the River Arts District, which features multiple galleries and studios open to the public in more than 20 former industrial buildings. The district sits along the banks of the French Broad River and is one of Asheville’s newest revitalized areas.

Weaverville is a tourism community with charming inns and vacation rentals, and its Main Street is lined with impressive restaurants and galleries. Weaverville is only 10 minutes from both downtown Asheville and the Blue Ridge Parkway, and a popular gathering place is Lake Louise Park with its playground, fitness area and 6/10-mile walking trail. Also just minutes from Asheville is Woodfin, a small community along the French Broad River. Woodfin is perhaps best known for its North Merrimon Avenue that features antique stores, craft boutiques and cafes/restaurants.

About 15 miles from downtown Asheville is Black Mountain, which features amenities like 35 independent restaurants, Lake Tomahawk for outdoor recreation, and several downtown galleries and boutiques along its iconic Cherry Street. Mountainous landscape offers opportunities to walk, hike, bike, camp and fish, and the community continues to grow in popularity for seasonal tourists. Adjacent to Black Mountain is the Swannanoa Valley that houses two colleges, six conference centers and several summer camps.

If you’d like to learn more about the Asheville area, check out the latest edition of Livability: Asheville, NC.