This North Carolina Community Was Actually Designed by Martha Stewart

Forget towels and pie dishes — Martha Stewart fans can upgrade to a whole house designed by the domestic goddess. 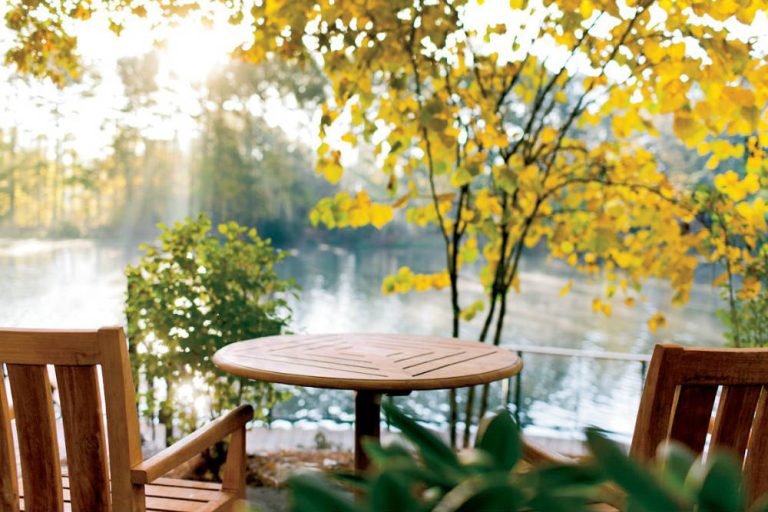 Category: Places Courtesy of bobistraveling under a CC 4.0 license.

You follow her scone recipes, dry off with her bath towels, and her DIY projects surround your home. But if that’s not enough Martha Stewart for your life, you can always consider a move to a home in Twin Lakes, a community in Cary, North Carolina, where Martha’s design aesthetic reigns.

House features chosen by Stewart resemble ones from her various residences she owned in 2006, when Twin Lakes debuted. At the time these included her estates in Westport, Connecticut; Bedford and the Hamptons, New York; and Seal Harbor, Maine. This means you’ll find features like built-in window seats, oversize dining areas, crown molding, picture frame molding, wainscoting, and beadboard, as well as (of course) Martha-approved paint colors.

The area surrounding the Martha Stewart-designed homes is pretty spectacular, too. Twin Lakes is full of amenities for active lifestyles, especially ones involving kids. There is a playground, a volleyball court, a tennis court, and a swimming pool with an enormous slide and on-duty lifeguard. The community also features a clubhouse that can be rented for private events by Twin Lakes residents only.

As if Martha’s design eye is not enough of an allure, the city of Cary itself is a selling point, too. This year, Cary nabbed a coveted spot on Livability.com’s Top 100 Best Places to Live list. With 60 miles of greenways and over two dozen public parks, Cary’s easy access to nature and neighborly vibe make it a perfect place for families. Twin Lakes exemplifies Cary living, with nearly two miles of paved trails called the Indian Creek greenway located adjacent to the community and more hiking paths planned.

Where Does Cary, N.C., Rank on Our Top 100 Best Places to Live List? Click Here to Find Out!

Located outside of Raleigh, the median home price in the greater town of Cary was $319,000 in 2016. This is slightly higher than the median home price for the entire United States. The added expense is likely due to suburb’s desirable location in what is called the “Research Triangle,” meaning the universities around Raleigh, Chapel Hill and Durham. Raleigh-Durham International Airport is nearby and the North Carolina coastline is a two- to three-hour drive away.

Residences in Twin Lakes are for sale between $150,000 and $500,000, according to LG Real Estate. All of the houses currently for sale in the community feature at least two bedrooms and two full bathrooms.

Twin Lakes is not the only community KB Homes and Martha Stewart have created together. Located outside of Atlanta, Hampton Oaks is another planned community featuring homes modeled after Stewart’s residences. Like Twin Lakes, Hampton Oaks has a playground, swimming pool and tennis courts but it also features a 100-year-old barn that has been renovated and remodeled to look like Stewart’s barn in Bedford.

In other words, if you’re a diehard Martha Stewart fan looking to relocate, you have some important decisions to make.