Skip to content
Home > NC > Graham > Love Where You Live > Living the Dream: I Moved to North Carolina to Open a Bakery

Janee had always loved to bake, but it was a move to small-town North Carolina that made her dream a reality. 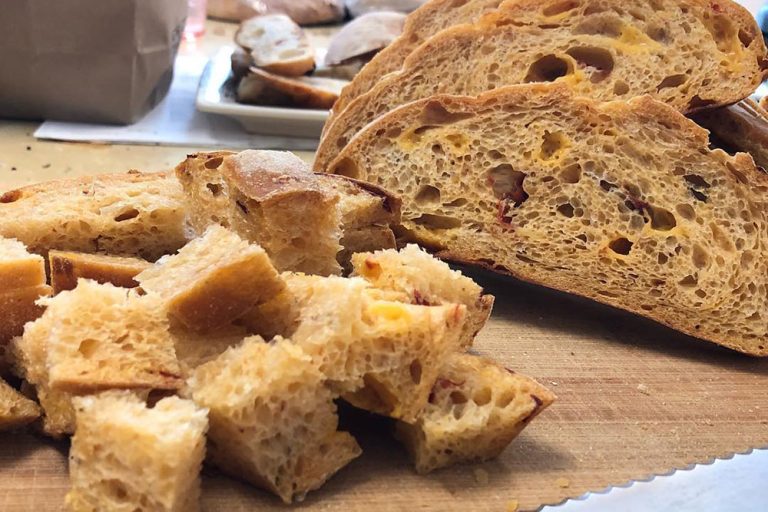 You’re a Californian. How did you end up in North Carolina?

My partner, Knowles, and I are really big campers, and in the summer of 2015 we took a 30-day cross-country camping trip, stopping in places that seemed interesting to us to consider moving there. Ultimately we decided to move Durham, NC, in the summer of 2016. One of the main reasons was financial. We lived in Santa Cruz, CA, for four or five years, and in that time we lived in three different rental places because every time our rental contract was up, our rent would go up by $100 or $200. At the time I was a K–5 reading interventionist and a counselor at a group home, making barely any money at either one of those jobs. There was no chance of ever getting out of that cycle.

Were you already dreaming about having your own bakery when you moved?

In 2009, my partner and I were living in Seattle, and when I couldn’t find sourdough as good as what we had in San Francisco, I made a sourdough starter and just started experimenting. The loaves tasted good, but they were terrible. I would forget to score the loaf and it would be like a dense, chewy hockey puck. But I was learning the art of it, and eventually we started trading and bartering it with my partner’s coworkers for things they made. It became a fun side hobby. I had the idea of selling bread when we were in Santa Cruz, but I was working too many hours, and I had no idea how to find a commercial kitchen or break into the farmers’ market scene.

What did you do to turn your pipe dream into reality?

Saying yes to things I would normally say no to. One day I got invited to bring my bread and do a tasting at a meeting at a co-working space in Graham called Co|Operative. We got to meet a bunch of people from Graham, and we really liked them. They were trying to find funding to revitalize downtown without getting rid of any of the historic buildings, and they wanted to bring a variety of businesses downtown so you’d want to hang out and do things in Graham, as opposed to driving elsewhere.

Part of our reason for moving to North Carolina was being able to buy a house. After the tasting there in Graham, we ended up buying a cute 1,300-square-foot brick house on almost an acre about 10 minutes from downtown Graham. It’s very quiet and very peaceful – and bigger than any place that we’ve lived in a long time.

How did the people in Graham welcome you and your bread?

Nathan Page, the city planning director, asked if I could do an order and drop it off at his office, and if there were people who wanted to order bread he would share a Google Doc ordering form with them. By December I was doing once-every-other-week deliveries to the city building.

Then in January I was invited to participate in the North Park Farmers’ Market, in Burlington, NC. I said yes, even though inside I was like, “This is ridiculous!” Then I had to scramble to find commercial kitchen space and figure out how on earth I was going to make this happen. I am a natural procrastinator, but in the end it all ended up coming together. It came together very last-minutey, which is my life. But it did come together.

What is it like to sell your own bread at the farmers’ market?

North Park Farmers’ Market is really pretty amazing. The community that comes to the market is very involved, very interested. The market’s in a food desert so it’s a way to get healthy foods to people who don’t have access to healthy foods. With the clients it was instant buy-in. I can have a crappy bake-off–it still tastes good, but isn’t as pretty–and they’ll still be like, “Oh, it’s so good. It doesn’t matter that it’s not pretty.â€ My favorite part is getting people to try my bread and talking to people about what sourdough is. I always do samples of my bread. Some people don’t know what sourdough is. They’re like, “How do you make it?â€ I say, “Basically how our ancestors made bread before we made little instant packets of yeast.”

I know you use local ingredients. Why is that important to you?

I want to support the community around me. Most of my flour is from Lindley Mills, about 7 minutes from my house. I specifically request North Carolina wheat. And I try to get all my inclusions for my pastries from the farmers’ market I work at. I do a three-pepper, spinach and feta hand pie, and I get all the peppers from the vendors. I have a squash quiche and I get the squash from Timberwood Organics. I get all the tomatoes and basil for my caprese flatbread from the market. Basically all the fresh produce I can get will be from vendors.

It’s healthier to eat vegetables that were picked in their prime just a few days ago or just that morning. I also like that my money is going to my neighbors. I think it’s important that we support the people around us. They are our infrastructure.

Do you have plans for a brick-and-mortar bakery?

Yes. There are people in Graham who are interested in me existing as a brick-and-mortar business in this town. I have enough people in my corner that I have to keep working on it. It takes a village to get something like that started.

For now, if we come visit, where can we find your bread?

I sell at two farmers market: North Park on Tuesdays, and I’m at one in Chapel Hill on Saturdays. I also have five wholesale clients. In Graham and Hillsborough, Steve’s Garden Market is really amazing; they have a lot of local produce. Press is a cute little French-style creperie in Graham and was one of the first businesses that opened in revitalization process of Graham. Right now I’m sitting at a place called Converge Coffee in Burlington. They roast their own beans, and all of their products come from local small businesses. They’re one of those companies that are supporting their community in their work. I also deliver bread to a caterer, Il Centro in Burlington, that’s really neat – they make their own mozzarella – and to Saxapahaw General Store and to Fitgerald and Faulkner, a cocktail bar with a food menu.

Where else should we go while we’re in the neighborhood?

Anywhere in Saxapahaw [about 10 miles from Graham], a small, really cute town. Try the Eddy and Saxapahaw General Store for amazing menus with a lot of local produce. (I am partial to the Pimento cheese fries at The Eddy, though they are rather gluttonous). and go to There’s a really amazing brewery right there, Haw River Ales. They always have a version of the Communal that is delicious! I almost always go for the flight!

In downtown Graham, Two Krafty is a furniture store that not only builds custom pieces but can refurbish and upcycle pieces! Graham Soda Shop offers quirky names for their menu items and hand spun milkshakes! There is also a local artisan marketplace called The Main Line where I am able to get locally made gifts during the holiday season. A lot is going to be opening soon in Graham that I am really excited about, like HiFi Records, a record store/bottle shop, which is such an interesting concept: listening to vinyls while sipping on local brews.

You said that you originally dreamed of coming to North Carolina to have a bit more financial stability and freedom to do what you wanted to do. Has that happened for you?

I’m working more than I’ve ever worked before. I average a 14-hour day, seven days a week. A short day for me is eight hours. But I’m not doing it because it’s the end of the month and I have no money. I’m doing it because I’ve chosen to. There are definitely minutes in every day where I’m like, What am I doing? But this is amazing and interesting and I want to see how far I can go with it. On days when the bake-off is good, it looks pretty, it smells good, and people make comments like “Oh my God, it smells so good in here,â€ I’m like, “This is okay.”

Any advice for other people who dream of having their own bakery?

Go work at a bakery. I didn’t, and I really wish I had because then I would see what it was like. Not just any bakery, not a grocery store bakery, but an actual sourdough or slow food movement type of bakery just to see how other people do things and se what it would feel like to every day, every minute be elbows-deep in dough.

Also, go everywhere and try all the breads that you can find, even the Wonder Bread that lasts for a month. Try it and see why you’d want to go make something. If you can’t see yourself making something better than what you have in your environment, then don’t do it. But if you see a need and realize, “There’s nothing like this here,â€ then go for it.

Last, what’s your favorite thing about living in Graham?

I love being private – not having a billion neighbors and passersby. I love the sense of community involvement that I have experienced in the short time that I have been here and how excited so many are about the growth of Graham as a place: a community place, a gathering place, a welcoming place. I love that I feel like this is home.