Learn why Eastern North Carolina is a leader in aviation, with manufacturers and suppliers employing more than 13,000 across the region. 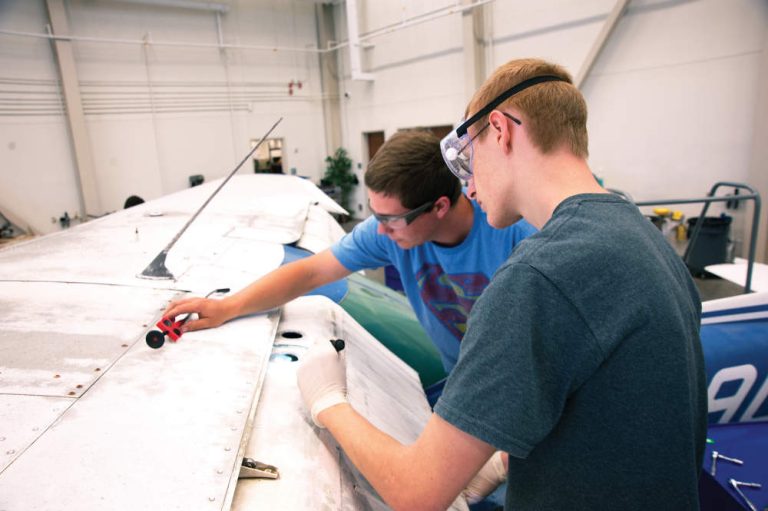 Greenville / Courtesy of College of the Albermarl

More than a century after it became first in flight, North Carolina is still taking a leadership role in aviation. Nowhere is that more true than in the 26 counties of the NCEast Alliance, where a critical mass of aerospace maintainers, manufacturers and suppliers employ more than 13,000 people, and area colleges are focused on training the next generation of workers for the field. The region’s aerospace workers are involved in making assemblies for one of the world’s newest airliners – the Airbus A350-XW – as well as refurbishing helicopters for the U.S. Coast Guard in Elizabeth City and rotor-craft for the Navy and Marines, developing vital communications equipment and testing the next generation of aircraft about to take to the skies – unmanned aerial vehicles (UAVs), also known as drones.

The aerospace industry has down-to-earth benefits for other businesses in the region, says Elton Stone, director of aviation systems technology for the College of The Albemarle’s Regional Aviation & Technical Training Center in Currituck County. Students trained for aviation-related careers can easily fill vital positions for other manufacturers.

“Our goal is to build jobs in our community,” Stone says. “The skills learned at the school are transferrable to other industries. For example, a student with an aviation engine certification could work on small gasoline engines or even diesel engines.”

Made in Eastern North Carolina

At Spirit AeroSystems on the Global TransPark, teams are building 65-by-20-feet center fuselage frame sections, weighing almost 9,000 pounds each, to ship to Saint-Nazaire, France for assembly into the Airbus A350. Spirit also builds the front wing spar for the plane at its facility, which opened in 2010. The A350 XWB is a long-range aircraft and the newest plane in Airbus’ fleet of wide-body, fuel-efficient airliners. The aircraft received type certification from the FAA at the end of 2014, paving the way for production to ramp up to meet scheduled deliveries across the U.S. and worldwide.

Other aircraft suppliers in the region include UTC Aerospace Systems, Honeywell and AAR Cargo Systems, which work on parts and systems ranging from fire suppressant systems to fuel injection systems.

“We are working closely with all our suppliers, and our own plants, to assure we are ready for the ramp up – not just for the A350 but for several new airplane platforms as well,” says Dan Coulom, a public relations manager for UTC Aerospace Systems.

Being located in North Carolina has definite advantages for UTC. The company’s headquarters is in Charlotte, and it has more than 1,200 employees in the state. Nearly 700 of those work at UTC’s Wilson facility, Coulom says.

“The quality of life and excellent educational institutions makes it easier to recruit top talent to the region,” Coulom says. “And we like the fact that North Carolina has a favorable business climate and places a high value on key technology companies such as our own.”

UTC Aerospace Systems designs, manufactures, and services integrated systems and components for the aerospace and defense industries, supporting a global customer base with significant manufacturing and customer service facilities worldwide.

Like UTC, the region’s aerospace companies make a strong contribution to defense and homeland security. Elizabeth City contractor DRS Technologies, for example, refurbishes Coast Guard helicopters, and Telephonics Corporation develops communication and sensor systems for aircraft. Development of UAVs – which have significant military and civilian applications – is taking off at several FAA-certified test sites, including Cherry Point’s Fleet Readiness Center East and Hyde County Airport. Companies such as TCOM LP are experimenting with remotely piloted aircraft (RPAs) For the past two years, the NextGen Air Transportation Center (NGAT) at North Carolina State University has been flying RPAs – remotely piloted aircraft – at Hyde County Airport. It is one of the few testing programs across the country to win an FAA certificate of authorization. The program had achieved the milestones of completing 260 flights and 70 hours of time in the air at the end of 2014. The location is perfect, NGAT Director Kyle Snyder says.

The program has concentrated on exploring agricultural uses of drones, including the use of video and multispectral cameras to study crop health. RPAs have the potential of empowering farmers to engage in precision agriculture and place fertilizers or pesticides exactly where they are needed. That will create local jobs for professionals trained to operate and maintain RPAs, Snyder says.

“We’re trying to grow the whole industry here,” he says.