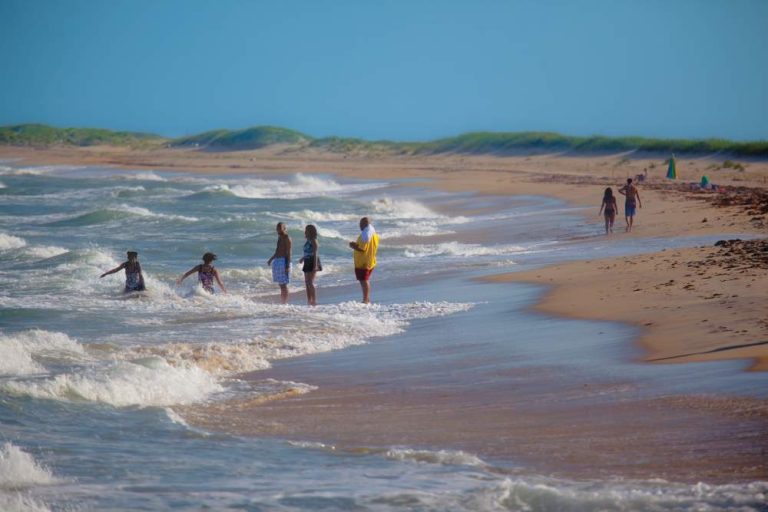 Eastern North Carolina’s many draws – beautiful beaches, pristine parks, historic sites and cultural attractions, to name a few – create a high quality of life that is bringing residents and tourists to the region in droves.

Located 30 miles from the mainland, the Outer Banks, also known as OBX, is home to 100 miles of shoreline and offers a perfect place to cast a line, go for a swim or set sail. It also includes the Albemarle and Pamlico sounds – the largest sounds on the East Coast. Its shallow waters are ideal for kiteboarding, windsurfing and parasailing. Nearby, Cape Hatteras National Seashore covers 30,000 acres and stretches from South Nags Head to Ocracoke Inlet. Established in 1937 as the country’s first national seashore, it’s one of the world’s top diving destinations and home to the Cape Hatteras Lighthouse. To the south, Cape Lookout National Seashore is part of the Crystal Coast and comprises three undeveloped barrier islands, totaling 28,500 acres. Cape Lookout offers shelling, fishing, birding and camping, as well as the Cape Lookout Lighthouse and two historic villages.

Back on the mainland, the region has several national and state parks, including the 159,000-acre Croatan National Forest in the New Bern area and the 14,000-acre Dismal Swamp State Park in Camden County, located next to the Dismal Swamp Canal. Stretching more than 200 miles between Roanoke Rapids and Plymouth, the Roanoke River Paddle Trail is a top spot for water lovers. Established by the Roanoke River Partners, the trail offers kayaking and canoeing opportunities and 15 riverside camping platforms.

Residents and visitors can get up close and personal with wildlife at Sylvan Heights Bird Park in Scotland Neck, which features more than 2,000 ducks, geese, swans and exotic birds. Additionally, the region’s three North Carolina Aquariums in Mateo, Pine Kroll Shores and Nags Head offer glimpses of ocean creatures. The region also lays claim to the NC Estuarium in Washington.

“Over the years, folks have shared that they come to Eastern North Carolina because of its beautiful undeveloped space, both land and water areas,” says Carol Shields, director of the Roanoke River Partners, a group that promotes use of the river. “They come because they can see and experience things here they haven’t had the opportunity to experience before.”

Thanks to its rich history, Eastern North Carolina is also a favorite destination for heritage tourists. The area is home to several of the nation’s oldest towns, including Bath, Edenton, Beaufort and New Bern, all of which feature must-see sites listed on the National Register of Historic Places.

“One of the real jewels in the middle of downtown Beaufort is the Old Burying Ground,” says Patricia Suggs, executive director of the Beaufort Historic Site. “It’s a graveyard that’s well over 300 years old, and it has an amazing history with the people who are buried there, from Otway Burns, a War of 1812 privateer, to Civil War soldiers and freed slaves.”

The Outer Banks’ Ocracoke Island Lighthouse is another popular destination for history buffs as it is the state’s oldest lighthouse in operation and the second-oldest operating lighthouse in the U.S. Also part of the Outer Banks, the Wright Brothers National Memorial at Kill Devil Hills commemorates the site of the first flight and celebrates the last century of aviation. Visitors can see the area’s famous wild Spanish Mustangs run on the  beaches of Corolla to the north or on Shackleford Banks along the Crystal Coast to the south.

Music and culture also thrive throughout Eastern North Carolina. Wilson features the Barton College/Wilson Symphony Orchestra and the world-famous whirligigs, while Rocky Mount is home to the Imperial Centre for the Arts and Sciences. Greenville includes a growing downtown district, thanks to revitalization efforts by Uptown Greenville, as well as Division I college sports and Go-Science, which is an all-ages science and technology learning center.