Health-care providers in Eastern North Carolina advance patient care options to bring the latest in specialties to the local level. 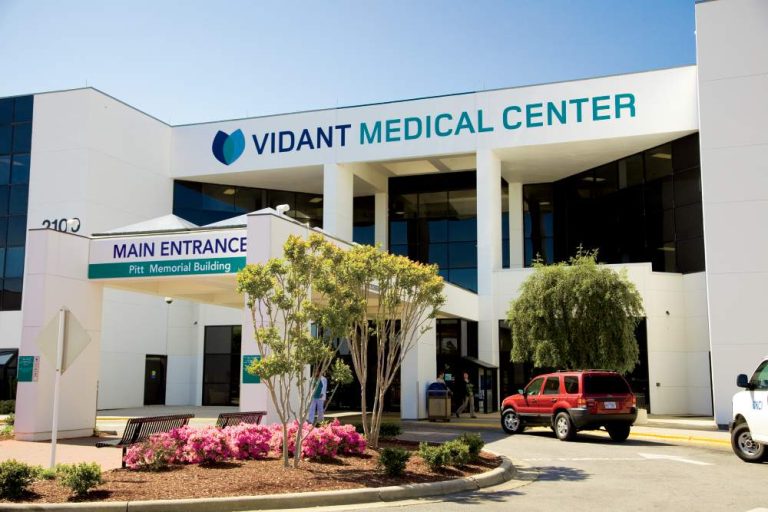 Minimally invasive is the watchword in medicine today. So when cardiac surgeons around the world want to learn the latest in this art of healing, they come to the international Robotic Surgery Center for Training and Education at the East Carolina Heart Institute in Greenville, a center associated with both Vidant Health and East Carolina University (ECU).

Vidant Health, the ECU Brody School of Medicine teaching hospital that owns, leases or has a majority membership interest in nine Eastern North Carolina hospitals, set a precedent of its own this year. Vidant received the 2013 John M. Eisenberg Patient Safety and Quality Award from the National Quality Forum (NQF) and The Joint Commission for its innovation in patient safety and health-care quality at the local level.

“The true beneficiaries of this award are our patients and their families, whose care has been made more safe and effective,” says Dr. David Herman, president and CEO.

Enhancements are also taking place at Vidant Children’s Hospital, a regional leader in specialized care for children that is currently adding three floors as part of a $200 million, six-floor expansion.

“This place will be more than concrete and steel; it will be a place where miracles happen,” says Dr. Ronald Perkin, co-medical director of the Children’s Hospital and chair of the Brody School of Medicine Department of Pediatrics.

The 120,000 veterans in Eastern North Carolina now have their own VA Health Care Center (HCC) in Greenville. Prior to its 2014 opening, veterans had to travel to Fayetteville or Durham for patient care they could not get from the nearby outpatient clinic.

“We’re pleased to welcome Eastern North Carolina veterans to their new medical home,” says Thomas S. Delaney, administrator of the new 116,000-square-foot facility, which is projected to care for 20,000 new veterans per year.

More than 150,000 Marines, sailors and their family members based in the region enjoy access to the Naval Hospital at Camp Lejeune, which has five branch health clinics located across Marine Corps Base Camp Lejeune and Marine Corps Air Station New River.

Enhancing specialty care is the goal of a $53 million expansion at Carteret General Hospital in Morehead City. CEO Dick Brvenik says the hospital is working to create a multidisciplinary care center focused on cancer services and radiation and medical oncology.

“Aggregating these services enhances treatment planning as well as convenience for patients, who will receive the same high level of care they used to have to go to Raleigh or Durham to obtain,” he says.

The new multidisciplinary cancer center has already attracted an affiliation with the prestigious Lineberger Comprehensive Cancer Center at the University of North Carolina at Chapel Hill. Carteret General is also planning a diagnostic cardiac catheterization lab and recently became an accredited primary stroke center. In addition, the hospital has received a Gold Plus designation by the American Heart Association for management of heart failure patients, an honor that fewer than 10 percent of hospitals nationwide achieve.

In 2014, physicians at Carolina East Medical Center in New Bern joined forces to create the Cardiovascular Center of Excellence to offer a comprehensive array of services for patients with heart health issues.

“We offer in our region a level of care that many would expect only from larger, academic hospitals,” says Dr. Ronald May, vice president of medical affairs.

In Rocky Mount, Nash Health Care recently opened a new state-of-the-art emergency and cardiac center that will allow physicians to expand services and treat more patients. The system also established an affiliation with UNC Health Care that will allow it to draw managerial, clinical and operational resources from the medical leader.

“This is an extremely comprehensive program,” says Dr. Tim Patselas, one of a dozen area physicians with special credentials to tend to patients in the center.

The continuing commitment to advancing patient care is shared by all providers throughout Eastern North Carolina.

“In terms of economic development, we know health care is very expensive,” Carteret General Hospital’s Brvenik says. “We want to be sure we provide high quality, but also keep our care affordable.”