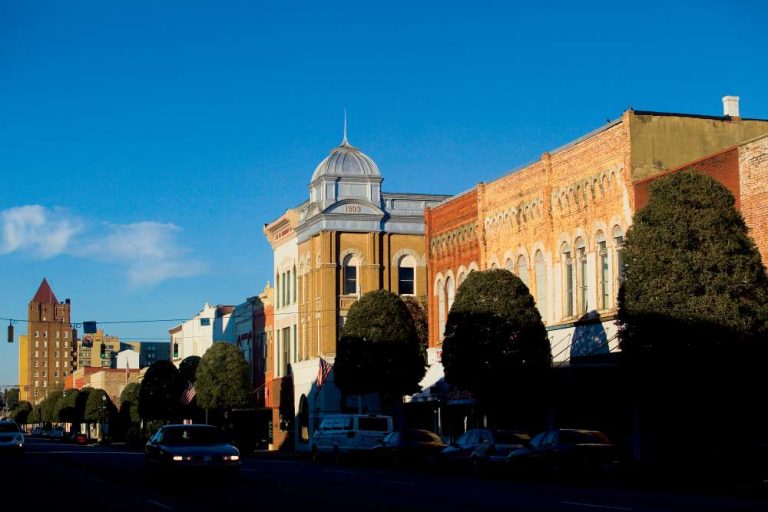 Once a quite area that drew mainly locals doing their daily business, Downtown Kinston is in the midst of a cultural renaissance. In the past few years, the former textile town has become a regional hotspot known for its award-winning food and craft beer, lively music, and burgeoning art scene.

“Downtown Kinston has become a real destination,” says Stephen Hill, who founded Mother Earth Brewing, an environmentally friendly brewery in the heart of downtown Kinston, with his son-in-law in 2008. “We have wonderful restaurants, wonderful beer, a wonderful nightlife. I’d call it a rebirth.”

A Taste of the Future

Much of the re-energized vibe is thanks to Kinston’s small-town charm and friendly business environment, which has attracted an influx of young, creative spirits. Chef Vivian Howard, a James Beard Award semifinalist, returned to her roots in 2005 when she and her husband moved from New York City to Kinston, where she grew up.

A year later they started Chef & the Farmer, an upscale, farm-to-fork restaurant that serves modern Southern cuisine made from local ingredients.

Just around the corner on Herritage St., the recently opened The Red Room lounge and music venue buzzes on the weekends with good food and live music. The Boiler Room, a gourmet burger and oyster bar will open in August, and the Asian-inspired Ginger 108 opened in April.

A Fresh Face on the Past

Downtown Kinston’s renewed energy spreads beyond the growing nightlife. History buffs will love taking a stroll down Museum Row, a cluster of downtown historical sites and exhibits, many of which have been recently renovated. Touch the hull of the CSS Neuse II, a replica of a Civil War-era gunboat, or spend the afternoon marveling at the artifacts on display in the CSS Neuse Interpretive Center.

Pride of Kinston, a local nonprofit, has worked hard to revitalize the downtown area by promoting economic development and aesthetic improvements with an eye toward historic preservation. The group hosts a series of family-friendly activities throughout the year, including a Christmas parade and the popular Sand in the Streets, a summer concert series in which regional and national acts play on the newly built bandstand on the bank of the Neuse River.

“It helps bring people downtown,” architect Michael Dunn says. “And while they’re here they start looking around at the shops and restaurants. People are really excited about doing things downtown again.”

Artists are also getting excited about downtown Kinston. Dunn’s architectural firm, Dunn and Dalton, recently renovated the vacant space below its downtown offices to create an artist space and working gallery.

Just a few blocks away, Mother Earth Brewing’s Stephen Hill has remodeled a row of houses for a planned artisan village, where potters, glass-blowers and other artists can create and display their wares in their own homes.

For Hill, it’s another step in the rebirth of his hometown.

“Kinston is now a place where you can truly live, work, and play,” he says.