Winston-Salem Is on the Move

New projects and investments are pouring in to this North Carolina hub, thanks to its great location and transportation network. 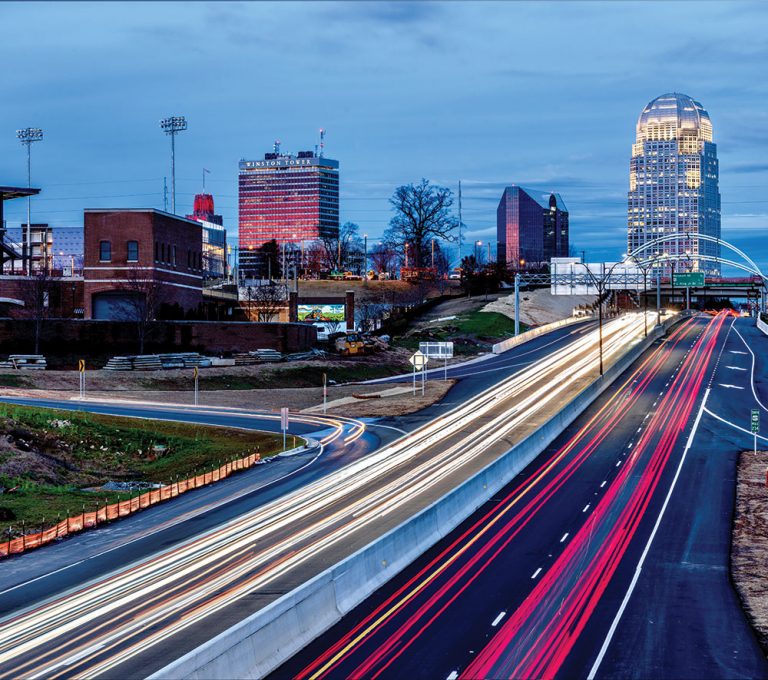 Winston-Salem sits at the intersection of integrated infrastructure and a prime location – a combination that attracts new investment and allows for the redevelopment of massive manufacturing properties.

Many businesses in Winston-Salem, especially those in the logistics and distribution sector, find their way here because they are attracted to the region’s easy access to five interstates, three major rail lines and Piedmont Triad International Airport, all of which are located within a short drive from the city limits. Plus, the region houses Smith Reynolds Airport, and half of the U.S. population is within 650 miles of Winston-Salem.

“Winston-Salem is small enough for business owners to make their mark while still offering all the benefits and opportunities of a large city. A lot of great things are going on in Winston-Salem, and we get to be a part of that action.”

While DAVENPORT, which primarily manages public and private projects relating to traffic, parking, pedestrians and roadways, isn’t in the shipping business, John Davenport, president of the company, says its location in the city has helped the business succeed.

“We are in a growing city where new entrepreneurs don’t get lost in the crowd,” he says. “In Winston-Salem, you can matter to the community and build relationships with the leadership and the people you work with.”

Some of the company’s recent local projects include transportation planning and design services for multiple apartment and retail establishments in the vicinity of Truist Stadium, formerly BB&T Ballpark, which DAVENPORT helped design.

The firm also provided site/civil engineering and traffic design services for the downtown 650+ vehicle parking structure that was completed in 2020. Plus, the company has provided design work for the Whitaker Park development, a 220-acre manufacturing complex donated by Reynolds American to Winston-Salem and Forsyth County.

The Whitaker Park complex is being redeveloped into a mixed-use job generator with laboratory space, multifamily residential units, information technology, manufacturing, and training and education opportunities. It has already landed a $19 million investment from Nature’s Value, a vitamin company. This will result in the creation of more than 183 new jobs in Forsyth County.

“This expansion project will help us to be more competitive and allow us to be more accessible to our main customers, while creating employment and economic prospects for the talented North Carolina working community,” Oscar Ramjeet, CEO of Nature’s Value, said at the time of the announcement. “We look forward to the opportunities that this expansion project will bring.”

Other tenants include Cook Medical and Second Harvest Food Bank.

To date, nearly all of the 1.7 million square feet of original building space is spoken for, with new development projects also occurring within the campus. One of those new developments, Whitaker Park Lofts, will feature 300 apartments, and plans are in place for hotel and retail space.

“I grew up in Winston-Salem and remember when Whitaker Park was a premier manufacturing facility,” Davenport says. “It is great to see it coming back alive. This is an excellent adaptive reuse project. The infrastructure is there and the connection to the interstates and the airport are big advantages.”

Existing infrastructure that can be reconfigured to meet today’s needs tips the scales in Winston-Salem’s favor when it comes to developing major projects like Whitaker Park, Davenport says.

“We have the infrastructure already in place to handle the redevelopment of these properties, and that’s awesome,” he says. “Other growing communities are having to build that infrastructure, and that’s expensive and sometimes even cost-prohibitive.”

Why You Should Do Business in Winston-Salem, NC

Diverse and thriving economy, along with a deep pool of talent and available land, are a huge draw for companies big and small.

Winston-Salem’s affordability and easy charm have made this midsize city of 250,000 one of the nation’s most popular places to live, with residents enjoying a diversified economy and rich cultural… END_OF_DOCUMENT_TOKEN_TO_BE_REPLACED