Here, you’ll find a community that exceeds expectations at every turn. Plus, you can enjoy small-town charm without sacrificing big-city amenities. 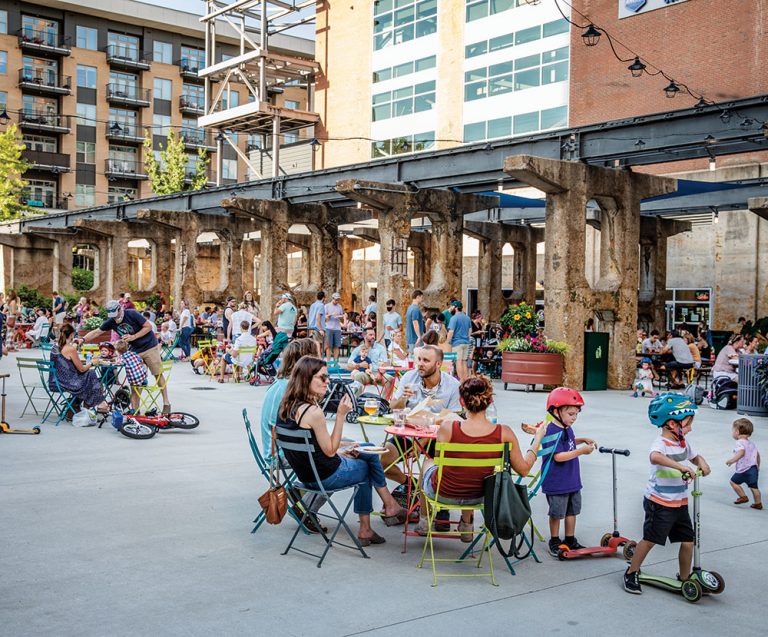 Chiedza Hooker, who was born and raised in Winston-Salem, knew she wanted to move back to the area after graduating college. It’s a place, Hooker says, that’s filled with genuine and creative people, and it’s easy to build a community here – something she was looking to do as she launched her career.

An advertising professional, Hooker also has a passion for service. She is the vice president of the Winston-Salem Urban League Young Professionals and volunteers with a number of organizations, such as the Junior League of Winston-Salem. That spirit of connectedness and the ability to contribute to the community are among the many things residents love about living in the region.

“What I love most about Winston-Salem is the vibrancy of the community and the intersection of arts, innovation and history,” Hooker says. “The city has been transformed from a manufacturing town into a center of culture, innovation, technology, medicine and so much more. I love having the opportunity to participate in and be exposed to so much all in one place.”

Here are five things drawing people to this area – you don’t want to miss out on them.

A Region on the Rise

1. You can afford to live here.

Whether you’re new to remote work and on the lookout for a place to call home, or you are looking to grow your career or continue your education, Winston-Salem stands out for its affordability. Overall, the cost of living here is 18.7% below the national average, according to Sperling’s Best Places. To break that down further, housing costs are 41.7% below the national average, and residents pay about 5% less for groceries and 3.5% less for utilities compared to elsewhere in the country.

2. You’ve got plenty of housing options.

Winston-Salem offers residents a wealth of housing options, from ones with a suburban feel to homes located in historic neighborhoods to lofts downtown. Plus, there’s new construction everywhere. The downtown area has 3,841 housing units with another 782 under construction and 552 proposed for future development.

Also, while the median value of homes in the United States is $303,000, according to Zillow, those looking to buy in Forsyth County can find homes under the $200,000 mark, which is considerably lower than other major metros along the East Coast. That’s one reason why Livability has included Winston-Salem in the top seven markets for first-time homebuyers and Business Insider has ranked it one of the best places to live in the South.

3. The region’s backyard is spectacular.

Residents have access to a number of top-notch and scenic hiking areas, including Blue Ridge Parkway, Grandfather Mountain, Black Mountain Crest Trail and the Appalachian Trail, just to name a few.

On top of that, Winston-Salem’s Recreation and Parks Department maintains 79 park areas. Popular ones include Happy Hill, which has a water playground – aka a sprayground – and Hathaway Park, which has a playground, picnic areas, green space and more.

Winston-Salem also has 25 miles of greenways, with paved
and unpaved trails, boardwalks and bridges that connect
neighborhoods, parks and community centers.

The region’s greenways include Bethabara Greenway, which connects historic Bethabara to Winston-Salem, and Little Creek Greenway that connects to shops. Winston-Salem’s Salem Lake is circled by a 7-mile walking and biking trail, and it also offers pier fishing, watersports, boating, and playground amenities.

For local Alex Collins, living here has provided plenty of ways to keep her two young boys busy. “The abundance of playgrounds, art parks, natural greenways and ample things to do (and eat) downtown are treasures to us,” she says.

Collins grew up in Winston-Salem, left for college and then moved to the Caribbean for a few years to start her career in hospitality. She moved back 13 years ago and witnessed the downtown area flourish. As sports lovers, her family also enjoys going to Wake Forest games and cheering on the Winston-Salem Dash baseball team.

For those looking to further their education or learn a new skill, there are premiere higher education institutions available in Winston-Salem, including the University of North Carolina School of the Arts, Salem College, Wake Forest University, Winston-Salem State University, Forsyth Technical Community College and Carolina University.

Because of the number of schools, employers have access to a rich talent pipeline. In fact, the Winston-Salem area also boasts a highly educated workforce, with nearly 35% of residents holding a bachelor’s degree.

Score an Excellent Education in Winston-Salem

5. Thrive in a world-class innovation district.

The Innovation Quarter isn’t just home to world-class research institutions and a mix of established companies and startups.

This thrumming knowledge community is also where you’ll find dining, like Six Hundred, which features dishes made on a wood-fired oven, as well as bars, cafés, specialty shops and other retail stores. Plus, a variety of events and programs – everything from yoga to film nights and festivals – take place at Bailey Park, a 1.6-acre urban green space in the middle of the Innovation District.

Residents also have access to the Long Branch Trail, an urban greenway running through the heart of the Innovation Quarter, which connects the district to the city as well as to a larger system of greenways running through Winston-Salem.

Long Branch Trail runs into the Salem Creek Greenway, giving people access to a 20-mile loop from the north end of the Innovation Quarter to Salem Lake.

“Winston is a family friendly sophisticated Southern city,” Collins says. “Our location, in the center of the state and Southeast, is ideal for quick (or long) trips to the beach, mountains and everywhere in between.”

Whether you’re a newcomer or just visiting for the weekend, be sure to add these items to your must-do list.