Skip to content
Home > NC > Winston Salem > Where to Live Now > 6 Reasons Winston-Salem, NC is a Great Place to Live

6 Reasons Winston-Salem, NC is a Great Place to Live

From great food to great schools, Winston-Salem has it all. 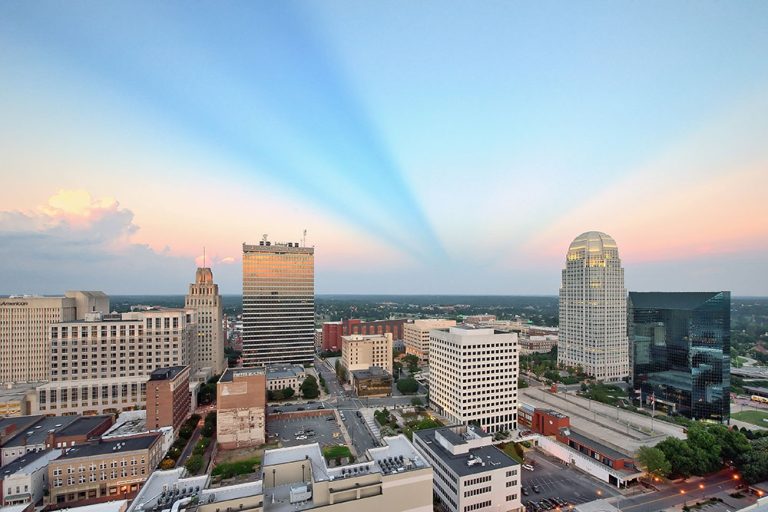 Known for its dedication to fine arts, history and creature comforts, Winston-Salem, N.C. is also a progressive community. From outstanding restaurants to innovative and exceptional cultural attractions, such as the Diggs Gallery, there are many reasons to join the Winston-Salem community.

Here are the top six reasons to move to Winston-Salem.

1. A wide range of incredible cuisine

Restaurants in Winston-Salem range from barbecue smokehouses to more contemporary fine-dining establishments. On the high end of that spectrum is the Tavern in Old Salem, built in 1816 as an annex to the historic 1784 Tavern in Salem. Today the family-owned restaurant serves up some outstanding dishes inspired by the family menus that would have been served in the 19th century. For anyone moving to Winston-Salem the Tavern is an amazing restaurant that offers a little bit of the town’s history.

The Tavern isn’t the only restaurant worth boasting about in Winston-Salem. Sweet Potatoes, in the Downtown Art District, has been serving deliciously unique, Southern-inspired food since 2003. Co-owners Stephanie Tyson and Vivian Joiner have created the ultimate menu of award-winning Southern cuisine. Bottom line: There’s no shortage of amazing restaurants in Winston-Salem. And we wouldn’t be surprised if, one of these years, they made it into one of our 10 Best Foodie Cities guides.

2. There’s a museum for everyone

Reynolda House Museum of American Art is the historic home of the Reynolds family, constructed by Richard and Katharine Reynolds in 1905. In 1965, Charlie Babcock established the Reynolda House as a nonprofit institution dedicated to arts education, and in 1967 the house became a public museum of American art. Today, art is displayed throughout the restored historic house, and changing exhibits are featured in the Mary and Charlie Babcock Wing added in 2005.

Looking for a kid-friendly option? The Kaleideum, formerly known as the Children’s Museum of Winston-Salem, opened in 2004 and has since been honored by the Institute of Museums and Library Services’ Museums for America program for its excellence in interactive learning for kids of all ages. The museum features an interactive playscape and several other interactive art installations. Actively involved in the Winston-Salem community and local education programs, the Kaleideum is an excellent resource for families moving to Winston-Salem.

By far one of best reasons to move to Winston-Salem is the beautiful Buena Vista neighborhood. Centrally located and within excellent school districts, Buena Vista has tons to offer families moving to the Winston-Salem community. The Reynolds Auditorium, Reynolda House Museum of American Art, and Reynolda Village are all points of interest nearby that foster the community. If you’re looking for a friendly and welcoming neighborhood in Winston-Salem, Buena Vista is where you want to begin.

Just outside of Winston-Salem lies the 1.4 million-acre Yadkin Valley, where you can run/jump/skip/frolic (ok, not literally) through the more than 40 wine vineyards that call the region home. Thanks to a microclimate caused by the front range of the Blue Ridge Mountains, as well as the supreme soil quality, the vineyards are able to produce a grape ideally suited for vinefera wine. Basically what we’re trying to say is: If you like wine, you’re going to right at home.

The Diggs Gallery is housed at Winston-Salem State University and describes itself as the cultural center of Winston-Salem. The gallery offers one of the largest exhibition spaces dedicated to the arts of Africa and African Diaspora in North Carolina. Diggs Gallery also aims to make a significant contribution to the culture of the Winston-Salem community through its educational outreach programs and tours.

Bailey Park is an urban green space located in the Innovation Quarter of downtown Winston-Salem. The park hosts community gatherings on its spacious lawn and is welcome to the Winston-Salem public year round. Bailey Park also includes a covered stage and food truck courts that make the park a perfect place for local artists and vendors to bring the community together.

Winston-Salem’s affordability and easy charm have made this midsize city of 250,000 one of the nation’s most popular places to live, with residents enjoying a diversified economy and rich cultural… END_OF_DOCUMENT_TOKEN_TO_BE_REPLACED