City visionaries are purposely preserving its past while investing in its present and future. 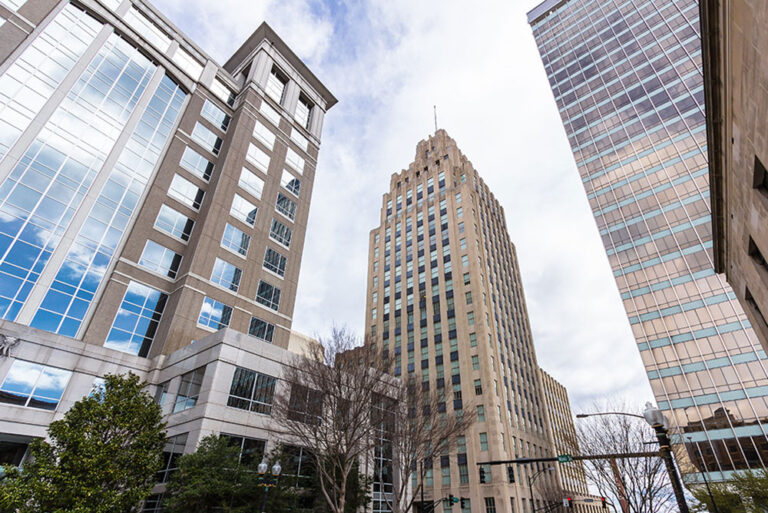 Winston-Salem, NC, has one foot in the past and present — and that’s by design. Visionaries have worked hard to preserve the city’s historical integrity while incorporating modern amenities. The Kimpton Cardinal Hotel, Roar and Innovation Quarter are just a few of the cultural and architectural assets that straddle both worlds.

The building was registered on the National Register of Historic Places in 2014. This was important because it allowed the developers to keep most of the iconic spaces intact during the renovation.

How much does it cost to live in Winston-Salem? We got a local to tell us all the details.

“As you walk through the front doors, you enter this beautiful Art Deco grand elevator lobby,” says Kelly Brown, general manager. “There are six big brass elevator doors, marble floors, and gold-leaf ceilings. And in the reimagined spaces, such as the elevator lobby, you’ll see a lot of thoughtful design blends that tie in local traditions.”

Guests at the Kimpton Cardinal can enjoy dinner and drinks at the Katharine Brasserie restaurant located on-site, named for the matriarch of the Reynolds family. They can also experience the unique amenities in the game room like a twisty slide, bowling, and basketball court. The hotel’s game room is modeled after the Reynolds family’s basement, which was designed for their four children in the family home nearby. It has since become the Reynolda House Museum of American Art – where you can tour the home and surrounding village.

Roar, a nod to the speakeasy era, is equally rooted in nostalgia. The property is a former Ford plant that was built in 1926. It is being transformed into a food, drink, and entertainment destination that will emulate its Roaring 20’s roots.

Nikki Terry of Mayfair Street Partners says the development company has big plans for the building at 633 N. Liberty St. “We’ll have restaurants, a golf simulator and other games like boutique bowling,” she says. “The middle floor is going to have a food hall. We’re going to have several different food concepts, such as Asian fare and American food — a little of everything.”

Roar will also feature a rooftop bar, and an event space for weddings and live music that will hold up to 500 people.

Winston-Salem’s Innovation Quarter is one of the fastest-growing developments of its kind in the country. It’s home to more than 170 companies, five leading academic institutions, more than 3,700 workers, and 1,800 degree-seeking students.

More than 140 years ago, it was a large manufacturing district for R.J. Reynolds Tobacco Company that included several warehouses and manufacturing plants, as well as a coal-fired power plant that supplied electricity to the operations.

Twelve historic properties were rehabilitated as part of the development of the Innovation Quarter, which also includes new buildings integrated within the historical ones.

This downtown district welcomes community and focuses on the future.

The district is considered a case study in successful placemaking, fostering a forward-thinking environment for innovations, partnerships, and community development, says Graydon Pleasants, head of real estate development at the Innovation Quarter.

“I think it’s the nature of the buildings — that they are reimagined,” Pleasants says. “They are quite inspirational. If you’ve not been to Winston-Salem, I would urge you to come and walk around there, especially at night. It’s a magical place and people really respond to that.”

This article was sponsored by Greater Winston-Salem, Inc.