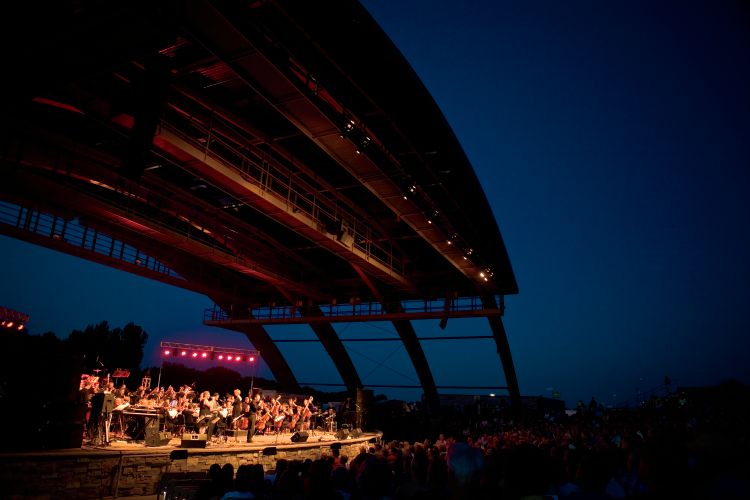 In Fargo, concert venues draw top musical acts, while theaters set the stage for live performances and museums and galleries showcase artful creations. Fun annual festivals round out the area’s many entertainment options.

The Plains Art Museum is the single largest art museum between Minneapolis and Seattle. It features revolving exhibits, special events and public work spaces. The museum’s educational offerings include printmaking, landscape painting and a clay camp for children.

Fargo Air Museum delights aviation lovers with a collection that includes the world’s only flying Super Corsair. With more than 50 exhibits, the Children’s Museum at Yunker Farm will keep little ones entertained for hours. Housed in an 1876 brick home, the museum has been lauded by Child magazine as one of the best in the nation.

Focusing on regional and international artistic heritage and cultural traditions, the Rourke Art Gallery Museum includes a permanent collection of pieces from artists such as Andy Warhol and Leonard Baskin, as well as many temporary exhibitions.

The Spirit Room includes a gallery with works by local artists and offers several wellness classes.

To enjoy a Broadway series show, look no further than the Gate City Bank Theatre, located inside the Fargodome. Fargo has also drawn touring productions by plenty of big-name artists, such as Paul McCartney, Pink and Taylor Swift.

The Fargo Theatre showcases a mix of speakers, concerts, and foreign and independent films. The venue was used as a cinema and vaudeville theater after it was built in 1926.

Bluestem Center for the Arts hosts events and concerts by artists such as Sheryl Crow, and also is home to Trollwood Performing Arts School. The Stage at Island Park, a half-round theater, hosts plays, concerts and events. Additionally, the Fargo-Moorhead Community Theatre puts on several shows a year and offers acting classes for all ages, and Theatre B‘s ensemble puts on about four shows annually.

The Fargo Moorhead Ballet also entertains local audiences, performing in shows such as A Midsummer Night’s Dream, while the Fargo-Moorhead Opera and Fargo-Moorhead Symphony Orchestra offer several concerts each season. Great Plans Harmony, a 50-member men’s chorus, performs music in genres such as gospel, barbershop and vocal jazz. For even more live music, check out The Aquarium.

The music scene in Fargo heats up each August as the city sponsors a two-day Blues Festival, which has been recognized as one of the best of its kind in the country. Fargo’s Jazz or “Jass” Festival also takes place in August. The free, two-day event includes live performances by local musicians.

In nearby Detroit Lakes, Minn., a favorite summer event is WE Fest, an annual country music festival at the Soo Pass Ranch.

The Fargo Film Festival each March showcases nearly 100 movies created by filmmakers from around the U.S. and beyond.

See more on the arts in Fargo, ND.