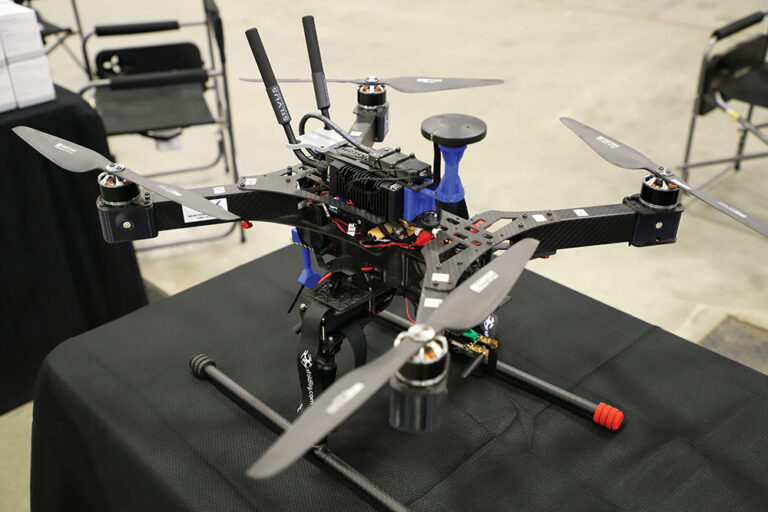 Williston is having a moment — one that will impact the city and region for decades.

Williston is at the epicenter of innovation in two tech-driven industries: cryptocurrency and unmanned aircraft systems (UAS).

Vantis, the nation’s first statewide UAS beyond visual line of sight (BVLOS) network, made North Dakota its testing ground. The network, described as a roadway in the sky, will start between Williston and Watford City and expand in the future.

“Williston is experiencing a technology boom,” says Shawn Wenko, executive director of Williston Economic Development. “We are prime for UAS development. Our rural nature makes this region the perfect place to refine that technology for use in areas of emergency services and monitoring systems and even to dip their toes into small package delivery.”

The application of the technology was evident in spring of 2022 when northwest North Dakota faced a massive blizzard and ice storm that left 50,000 people without power.

Drones were used to locate snapped power lines and downed poles, making it easier for the power company to coordinate its response.

TrainND Northwest, part of Williston State College, became the first entity in the state to have a beyond visual line of sight (BVLOS) waiver approved by the Federal Aviation Administration, allowing it to train people interested in flying drones beyond where the human eye can see. The development could have a significant economic impact on the region.

“We can take a student from zero knowledge to ready to fly BVLOS in four to six weeks,” says Kenley Nebeker, regional director for technical programs and training at TrainND Northwest. “This is a great opportunity for people who want a fun, exciting career that will explode in the next decade. The potential for this technology is untethered.”

“We are moving beyond theoretical to actual flight, which is a huge thing when it comes to training,” Nebeker says.

Meanwhile, Williston city officials have approved a study to identify economic development opportunities associated with UAS. Wenko says the study will provide a roadmap for the future and outline steps to utilize the Vantis system to attract business and investment.

While oil and gas remain valued industries in the region, Williston leaders are focused on diversifying the economy to ensure long-term stability and prosperity. The construction of the $1.9 billion Atlas Power Data Center is a significant step toward that diversification. Built by FX Solutions, it will be one of the largest such centers in the world.

Uses for data centers include the mining of bitcoin and other digital currencies. Cryptocurrency mining involves supercomputers to provide security for transactions, a process that generates heat and consumes vast amounts of power. Reliable and affordable energy and a naturally cool climate make North Dakota attractive for data centers.

The two-year construction phase will require hundreds of workers, and the center will create 30 permanent jobs. Phase one of the project will consist of 16 buildings, each longer than a football field. When phase one is in operation, the data center will use an estimated 360 megawatts — and double that by the end of phase three. By comparison, Williston uses around 50 megawatts during peak hours. Mountrail-Williams Electric Cooperative will provide power.

The ability to provide readily available, reliable and reasonably priced power is crucial to the project, says Steve Kemp, a Williams County commissioner.

“It’s really all about power when you talk about data centers,” he says. “We’re thankful for the leadership Mountrail-Williams has provided and to the oil and gas industry for getting us to this point.”

With experience in IT, Kemp is pleased about the addition of tech jobs created by the data center.

“What we have to offer in the realm of jobs and opportunity for young people is exciting,” he says.

The data center is just the latest significant investment in the region. The Cerilon gas-to-liquids plant, the SAFuelsX plant, and Wellspring Hydro will turn byproducts of the oil and gas industry into value-added products. The SAFuelsX plant and Wellspring Hydro are expected to break ground by the end of 2022, while construction on the Cerilon plant will start in late 2024.

Learn more about innovation and developments in the region at willistonwire.com.