Why you should add this New England city to your list of craft beer destinations. 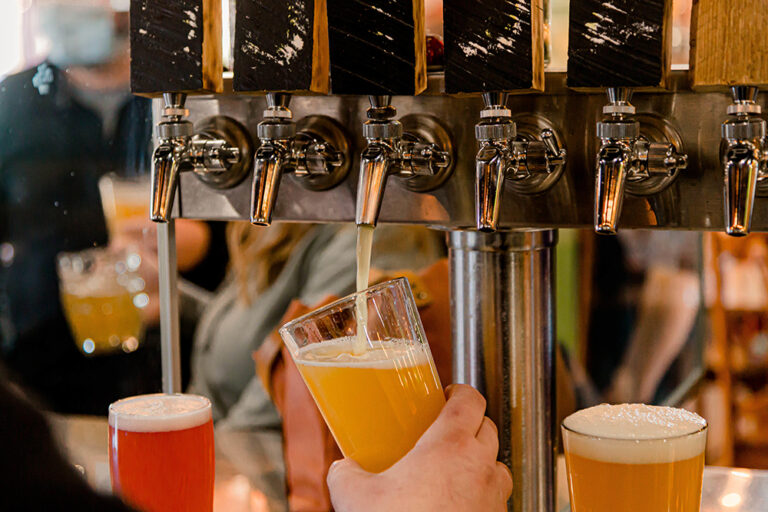 When you think of cities known for their craft breweries, places like Asheville, Denver and Portland may come to mind. But you’ll also find a wealth of craft breweries in Manchester, NH. Here’s why you should add this flourishing New England city to the list of craft beer destinations that shouldn’t be missed.

With breweries, distilleries and wineries on just about every corner, Manchester‘s brewing scene is exploding and features a tight-knit community you’ll be hard pressed to find elsewhere.

The Granite State’s beer and ale brewing industry dates back to colonial days and modern breweries are continuing the craft.

The craft beer industry is in its heyday, and while many cities boast several local breweries, it’s the community that really makes Manchester shine as a beer destination.

Trivia host Bill Seney and musician Alli Seney have been driving beer enthusiasts from brewery to brewery in their Ford Transit van since 2018, making them experts in the hopping Manchester brewing scene.

Together, they run the popular Manchvegas Brew Bus, which offers private, customizable tours to breweries, distilleries and wineries in the Greater Manchester area.

We sat down with Bill Seney to talk about what makes the brewing community in Manchester so special.

“The brewery community in Manchester is a very tight-knit network. We are mostly all friends, and we all help each other out. It’s a really good group. We get together for beer fests regularly,” Seney said.

There are approximately 15 breweries and distilleries located within a 10-to-15-mile radius in Greater Manchester, but they all work together. This camaraderie is evident at each brewery, creating a welcoming vibe for visitors. According to Seney, it’s not uncommon to see someone from one brewery popping into another and asking for a spare part or an extra ingredient, which is given without hesitation.

Of course, a little healthy competition never hurt anyone.

But at the end of the day, all the breweries can come together for an event, and it feels like one big, extended family.

Because there is such a concentration of breweries in such a small radius, Manchester is ideal for brewery tours. The Manchvegas Brew Bus is able to take tour goers quickly and safely from one destination to the next — without them losing their buzz.

People from across the country have caught wind of Manchester’s charm and friendly craft beer scene, making it a destination for bachelor and bachelorette parties, friend trips and family reunions.

And, if you’re not a beer fanatic, don’t worry! There are fantastic distilleries and even wineries to check out in the area.

While each brewery in town is unique and worth checking out, there are three breweries you absolutely cannot miss.

Backyard Brewery is a sprawling family-friendly brewpub that has been a mainstay in South Manchester for years. Visit for trivia on a Wednesday and you’ll meet Seney himself.

Great North Aleworks is a beer factory, shipping out pallets of beer at a time. Tours of the facility are a must and are usually given by the owner himself, Rob North. Towers of beer cans make for a great photo op!

Beers You Must Try

When it comes to the types of beer brewed in Manchester, there’s plenty of variety. Everything from porters to saisons can be found, with each brewery offering their own spins.

However, nearly every brewery will offer its take on the classic New England IPA that the area is widely known for. Candia Road Brewing Company’s Cone Zone is their staple New England IPA, and Backyard Brewery mixes it up with Pivot, a hazy, experimental New England IPA.

Seney is confident Manchester will continue to thrive in its brewing community as long as they all work together, and he expects more and more breweries to join the scene.

“I bring them customers and I am a vehicle to help other small businesses. We’re all in this together — all these breweries do better when the Brew Bus does better and vice versa. If we continue to be happy and do what we’re doing, we’re going to build a thriving scene that people from all over the country will want to come and check out, and that’s exactly what happens.”