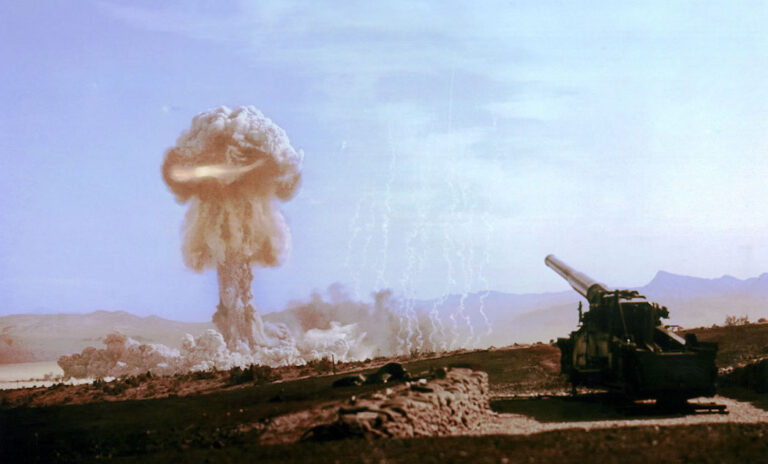 Courtesy of Los Alamos National Laboratory under a CC 4.0 license.

As the place where the world’s first atomic bombs were developed and tested, Los Alamos has a unique history that’s closely tied to World War II. Read on to learn more about the top-secret Project Y and the Manhattan Project, as well as the nuclear weapons created in Los Alamos.

Project Y and the Manhattan Project

Now known as the Los Alamos National Laboratory, Project Y was an atomic weapons laboratory directed by J. Robert Oppenheimer, who is often remembered at the “father of the atomic bomb.” The lab was conceived during the early stages of World War II, as the U.S. wanted to create an atomic explosive to counter the threat of the German nuclear development program.

Project Y was part of the Manhattan Project, which received its name because the program began under the Manhattan Engineering District of the War Department. The project was headquartered in Los Alamos because of the city’s isolated location, and at the time, Los Alamos was such a secret that it wasn’t included on maps. Those working on the Manhattan Project, including physicists, chemists, metallurgists, explosive experts and military personnel, were not allowed to tell anyone where they were, and all residents were served by a single post office box.

Little Boy, a gun-type uranium weapon, was developed and tested in Los Alamos, and a bomb with the same design was dropped on Hiroshima on August 6, 1945. Developed at what is known as the Gun Site, Little Boy was designed so that a “bullet” of nuclear material could be fired at a high speed into a second nuclear mass, which would create a critical mass. Named in honor of President Franklin Roosevelt, Little Boy weighed more than four metric tons, and it was the world’s first deployed atomic bomb.

Fat Man, an implosion plutonium bomb, was also created in Los Alamos, and it was dropped on Nagasaki on August 9, 1945. Weighing nearly five tons, Fat Man – named for Winston Churchill, England’s Prime Minister – had a plutonium core surrounded by 64 explosive charges arranged in an inner and outer shell. Although Fat Man was never tested, Los Alamos scientists tested a similar bomb called Trinity on July 16, 1895, on the U.S. Air Force base at Alamogordo, N.M. This signaled the beginning of the nuclear age.

Ultimately, both Little Boy and Fat Man – and the research, development and testing that took place in and around Los Alamos – heavily contributed to the ending of World War II. On August 15, Japan’s Emperor Hirohito announced the country’s unconditional surrender, and the formal surrender agreement was signed on September 2, 1945, aboard the U.S. battleship Missouri that was anchored in Tokyo Bay.