8 Fabulously Fun Things to Do in Roswell, NM

Whether you're a newcomer or long-timer, these activities are simply out of this world. 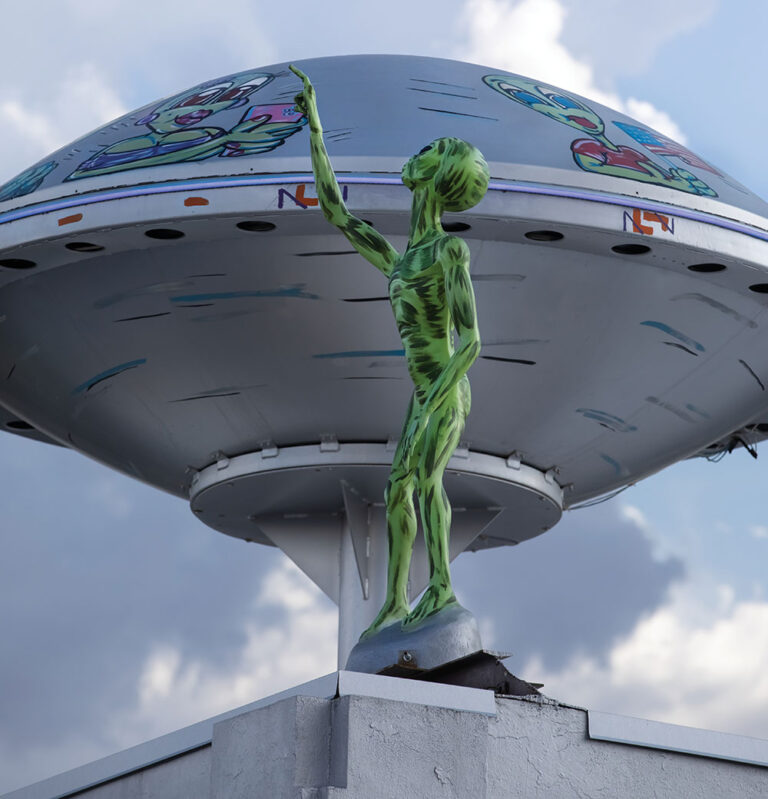 The famous 1947 UFO “Roswell Incident” may have put this New Mexico city on the map, but residents and visitors will tell you that there’s so much more to this vibrant region. So sure, come for the alien attractions, but be sure to stay for all the other year-round activities. To get you started, here are eight fun things to do in Roswell, NM:

Roswell is the site of an alleged UFO crash landing that captured the nation’s attention in July 1947. The city eventually opened the International UFO Museum & Research Center to capitalize on visitor interest in the event. More than 200,000 people visit the UFO Museum each year, and Roswell also hosts an annual UFO Festival for three days in early July.

Roswell, NM: ‘Come for the Aliens, Stay for the Art’

Robert H. Goddard Planetarium is home to a state-of-the-art, full-dome digital theater system that brings the story of cosmic origins to life. The 120-seat planetarium presents star shows and hands-on activities for children and families, and all programs last about an hour. At special times throughout the year, the Roswell Astronomy Club presents Star Parties at the Planetarium.

Nine small but deep lakes highlight Bottomless Lakes State Park, and all waterways are ideal for canoeing and kayaking. Bottomless Lakes is 15 miles southeast of Roswell, and Lazy Lagoon is the largest of the nine lakes. For those who also like swimming, Lea Lake is the only lake where swimming is allowed.

If you enjoy nature, head to Bitter Lake National Wildlife Refuge to see more than 300 species of birds, including large populations of sandhill cranes. Also at the refuge is approximately 75 species of dragonflies, and a special dragonfly viewing area is set up along a self-driving tour route. The peak dragonfly population arrives from early July through August. Bitter Lake hosts an annual Dragonfly Festival every September.

Outdoor enthusiasts can go ATV riding at Mescalero Sand Dunes. Located 45 miles east of Roswell are 610 acres of 90-foot-tall sand dunes that are ideal for riding off-road vehicles such as all-terrain cycles, sand rails and dune buggies. Here’s a surprise to go with your ride: You’ll see cottonwood trees thriving here, thanks to a shallow water table and the sands’ ability to hold water.

Make a splash at the new Roswell Recreation & Aquatic Center. The rec center features a gym, four sports courts and a group exercise room, and programs include fitness classes, sports leagues and kid camps. The aquatic center is equipped with an Olympic-size pool.

Take the family to a Roswell Invaders baseball game at Joe Bauman Stadium. The Invaders are part of the professional Pecos League, and their 50-game season runs in June and July with playoffs in August. The Invaders are four-time league champs.

Why Move to Roswell, NM?

Sure, you may know Roswell for its otherworldly experiences, but this New Mexico oasis offers the perfect blend of affordability, recreation, arts and charm.