Robot Revolution: How Reno Is Leading the Way in Robotics Education

Robotics competitions in Reno, NV, are more than just fun — they're educating the next generation for high-paying AI careers. 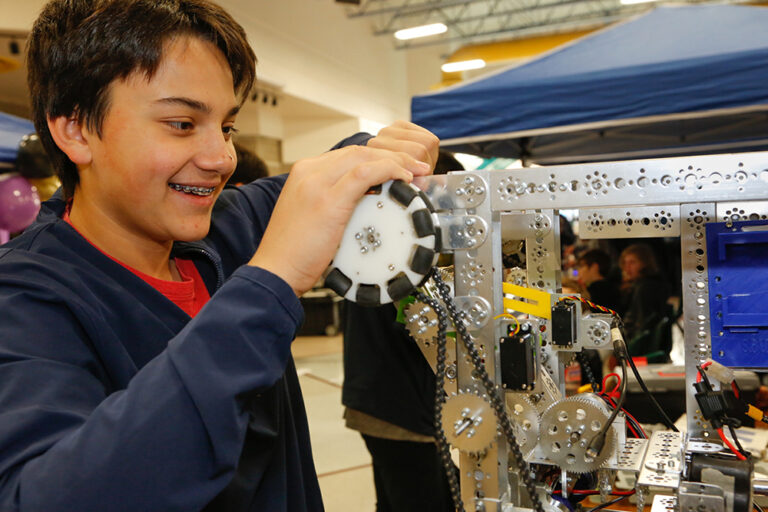 Jamie Poston’s interest in robotics began in middle school when she got involved with FIRST Nevada. The local chapter is part of a global organization that, through mentor-based programs, inspires young people to be leaders and innovators in science and tech fields. The program culminates with rousing robotics competitions that are considered “sport for the mind,” wherein, under the pressure of a deadline, teams build and program industrial-size robots to perform an activity — for instance, play field games.

“Robotics is sometimes super intimidating,” says Poston, a Reno young professional who works as a machine learning engineer. “You see something like ‘WALL-E’ on the big screen and think it must be some sort of tech-y magic that’s making the robot work. But these local K-12 competitions really show students that robotics isn’t something unattainable, it’s something that you can do, too.”

In the Reno-Sparks area, robotics education is flourishing, with strategic investments being made to prepare future workers to meet the demands of a high-tech economy bringing high-paying careers to Nevada. The need to get students ready for these types of careers is pressing: By 2026, the total numbers of Science, Technology, Engineering and Math (STEM) jobs are projected to increase by 26.5 percent, with more than 72,400 new jobs available, according to the Nevada Governor’s Office of Science, Innovation and Technology.

Robotics education in Reno starts as early as kindergarten with palm-size Ozobot Evo Coding Robots that early learners can code to trace colored routes drawn with special markers. The curriculum continues through higher education, where, at the University of Nevada, Reno, students interested in robotics careers can take courses like “Robotics for Humanity” and earn a minor in unmanned autonomous systems.

“If you’re interested in robotics, you can really thrive in Reno,” says Poston, who attended the University of Nevada, Reno, for both her undergraduate and master’s degrees in computer science and engineering. The company she works for provides professional editing service for academic authors so that their papers have a higher chance of being published in a journal. Her role is to teach the AI models that are trained on academic writing to make intelligent edits to papers.

Here’s a look at how Reno is positioning itself as a leader in robotics and helping ready graduates for the tremendous growth in high-paying careers.

Teachers Trained To Be Robot-Ready

Back in 2009, Nevada had one of the highest unemployment rates in the country. When Governor Brian Sandoval came into office in 2011, he was laser focused on diversifying the state’s economy so that it wasn’t so reliant on gaming, and part of that strategy was to bring a large anchor employer to Nevada.

In 2014, Tesla broke ground on its Gigafactory outside of Sparks, where it partnered with Panasonic to create batteries for its electric vehicles. During the next four years, overall employment in Washoe and Storey counties grew by 34,500 jobs, and the Gigafactory is estimated to have provided 44 percent of those employment opportunities.

As part of doing business in the state, Tesla committed to investing $37.5 million in K-12 education. The funding, which began in 2018, helps support projects like training opportunities for educators interested in teaching robotics, building educational facilities and creating pathways to employment following high school graduation.

There are now 4,100 students participating in after-school robotics teams, with thousands more participating in robotics classes via electives and vocational training, according to a 2022 progress report. Part of Tesla’s investment is also helping to fund the Terry Lee Wells Nevada Discovery Museum (The Discovery), which has a bilingual exhibition called “Energy/Energía” that explores sustainability concepts and empowers visitors to understand their energy footprint and pursue careers in the sustainability sector.

Why Reno, Nevada, Is a Great Place To Raise a Family

Great schools, a welcoming community and incredible access to the outdoors are just a few of the reasons.

The Tesla investment also provides funding to Nevada Robotics, which works to create robot-ready teachers to prepare STEM workforce-ready students. These professional development programs provide educators with the skills, confidence and equipment they need to bring STEM education into their classrooms. The vision is to help students to think creatively and solve complex problems through hands-on robotics education, says AJ Long, a STEM and robotics education administrator at Desert Research Institute.

“We train teachers so they can deliver robotics lessons to their students,” Long says. “We’re going to reach a lot more students that way.”

To date, Nevada Robotics has successfully trained more than 1,300 teachers who have reached 190,000 plus students statewide. Plus, there’s a robot lending library where teachers can borrow robot kits to use for classroom instruction or to get a school robotics team up and running.

One of the best ways to get youth interested in STEM education? Put it in a fun competition format.

FIRST Nevada students learn a whole slate of skills that are applicable to a variety of careers, says Patti Poston, a FIRST Nevada senior mentor. Teamwork and communicating with each other through “gracious professionalism” to solve problems are foundational skills. Team members also learn the engineering design process, how to code, how to design a robot in CAD (computer-aided design), plus business acumen like fundraising and grant writing. They also learn how to think outside of the box, she says.

“They need to come up with innovative ways to build their robot to win a match,” Poston says.

Her daughter Jamie Poston explains that FIRST helped her understand how valuable it is to methodically troubleshoot an issue and get to the root of the problem, something that’s been paramount for her career.

Also, robotics events like FIRST competitions are a great way to network, as a lot of local engineers regularly volunteer, she says.

These activities and others are preparing today’s graduates for careers in automation, manufacturing and technology.

After all these years, the early history of Jackpot still hints at the unique character of this scenic, high-elevation town in northeast Nevada.  In the 1950s, when Idaho outlawed casino… END_OF_DOCUMENT_TOKEN_TO_BE_REPLACED