8 Reasons to Move to Reno

Tech Industry and data giants are the driving forces behind the area's economic and population growth. 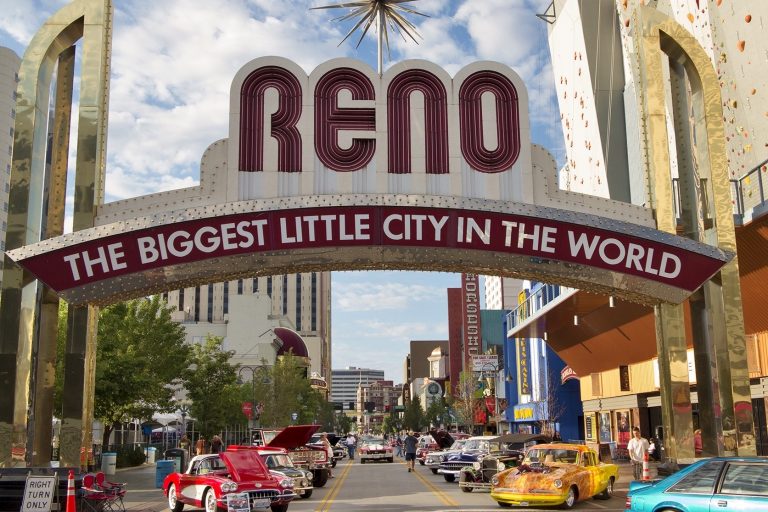 Once primarily known as a gaming destination for California tourists, the “The Biggest Little City in the World” is riding a wave of tech investment that is bringing jobs and economic growth to northern Nevada’s largest city.

In the automobile industry, few things symbolize innovation more than Tesla, and Elon Musk’s electric vehicle maker has made a significant commitment to the Reno area with its gigantic Gigafactory battery-making facility, about 25 miles from downtown Reno at the Tahoe Reno Industrial Center, the largest industrial park in the world. Already operating, the Tesla facility is being built in phases, eventually becoming what the company expects to be the biggest building in the world.

Next door to the Gigafactory, data giant Switch opened the first building in its Citadel Campus data center in early 2017. The initial building at 1.3 million square feet, was the largest single data center in the world, according to the company, with planned expansion making it the world’s biggest data campus center.

In April 2017, Google purchased more than 1,200 acres in the Tahoe Reno Industrial Center. A month later, Apple announced a $1 billion plan to double the size of its data center in the nearby Reno Technology Center.

Bolstered by the infusion of tech, data and digital companies, Reno’s unemployment rate has dropped from double digits to the lowest metro area number in the state and below the state and national averages. Reno’s unemployment rate, which increased steadily over half a decade to a high of 13.9 percent in January 2011, was down to 3.9 percent in May 2017, according to the U.S. Bureau of Labor Statistics. The largest employers in the city are the Washoe County School District; University of Nevada, Reno; Washoe County; and Renown Regional Medical Center. Nevada was ranked fifth-best in the 2017 State Business Tax Climate Index by the Tax Foundation.

Reno sits in the shadow of the stunning Sierra Nevada Mountains, making it a desirable destination for outdoor enthusiasts. The Truckee River runs through the city, including the half-mile Truckee River Whitewater Park. Lake Tahoe and it’s year-round tourism offerings is about an hour drive south to the northern shore. Carson City, the state capital, is about 30 miles south, while the glitz and glamor of Las Vegas is about 450 miles southeast. San Francisco is a little more than four hours to the west, which makes Reno attractive not only to Bay Area tourists, but also to Silicon Valley companies.

Don’t Miss These Fun Things to Do in Reno, NV

The city is home to the University of Nevada, Reno, which offers a wide selection of undergraduate, graduate and doctoral programs for more than 18,000 students. The Wolf Pack athletic teams compete in the Mountain West Conference. The Washoe County School District encompasses Reno and nearby Sparks, with more than 63,000 students. The high school graduation rate has grown steadily from 62 percent in 2010 to 77 percent in 2016. The metro area also has several highly regarded private schools.

The median price for a single-family home in Reno was just under $366,000 in June 2017, according to the Reno/Sparks Association of Realtors. The median price in nearby Sparks was $299,000. With the influx of new employment opportunities, the existing housing inventory is stretched thinner in an active real estate market. Rental prices increased about 11 percent between 2015 and 2016. With the recession in the rear view mirror, builders are ramping up to keep up with demand.

Lake Tahoe offers a multitude of year-round recreational opportunities. Kayaks, stand-up paddleboards, canoes and sailboats are available for rent from a variety of vendors. The surrounding mountains also offer mountain biking and hiking trails for participants of all levels. The Lake Tahoe Bicycle Coalition and the Tahoe Rim Trail Association are excellent sources for maps and other information. Tahoe also is world-renowned for its snow skiing resorts. Mt. Rose is the closest resort to Reno, about a half hour away with a shuttle service to downtown. Other nearby ski resorts include Diamond Peak and Northstar at Tahoe.

Discover Why Reno, NV is a Top 100 Best Place to Live

The Truckee River Whitewater Park in downtown Reno features a half mile course for kayaks, canoes, rafts and inner tubes. Hunter Creek Trail, less than 10 miles from downtown, offers a six-mile hiking trail with a scenic waterfall, and there are numerous other local hiking trails.

From music to food, Shakespeare to self-discovery, Reno offers a variety of festivals for almost everyone – including those filled with hot air.

The colorful Great Reno Balloon Race, held each September, is the largest free hot-air ballooning event in the world.  Also in the fall, Reno is home to the National Championship Air Races. The Burning Man Festival, which includes radical self-reliance and radical self-expression among its 10 principles, is about a two-hour drive from Reno, the closest major airport to the desert event.

The National Bowling Stadium also hosts a variety of national events and attracts bowlers from across the country. The Reno Aces, the Triple-A baseball affiliate of the Arizona Diamondbacks, play their home games at Greater Nevada Field.

Reno has a population of about 245,000, up from slightly more than 226,000 in 2010, an increase of 8.5 percent according to the U.S. Census Bureau. The median household income was $47,012 as of 2015, with no state income tax. Temperatures range from the mid 40s in December and January to the low 90s in July and August. Average rainfall is about 7.39 inches over 50 rainy days, according to U.S. Climate Data. Despite recent economic diversification, Reno still is a gaming destination with about 20 casinos.