If you associate Reno with Vegas, you probably haven't heard about Reno's amazing arts and culture, unrivaled access to the outdoors or its thriving tech scene. 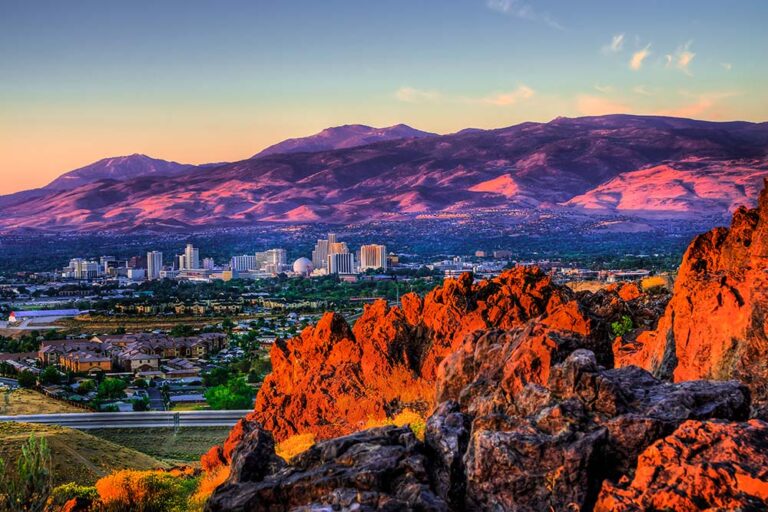 Reno, Nevada, is known as The Biggest Little City in the World for a reason — there’s so much to do, see and try within the ~105 square miles it claims. Whether you’re just looking for a nice vacation or trying to relocate to a new, welcoming city, Reno has it all, from outdoor sports and recreation to incredible performing arts and unique dining. And, if you associate Reno with Las Vegas, let us show you just how different the two places are with this list of 7 things you didn’t know about Reno.

Reno is closer to San Francisco than to Las Vegas, which is seven hours away at the other end of the state. It’s the closest non-California city to the Bay area. Reno residents can be in San Francisco in less than 4 hours and in Sacramento, California’s capital, in just a little over two hours.

And, though Reno does have casinos, it’s really more of a college town than a casino town. There are several colleges in Reno, including the University of Nevada, Reno, which is the state’s flagship public university and primary land grant institution. Because of this, college sports are closely followed, so it’s a great place for football fans.

Reno isn’t just a cow town out in the desert. The area has an abundance of resorts offering both summer and winter sports, from Lake Tahoe and ice-skating rinks to a proliferation of golf courses.

10 Things You Must Do In Reno, Nevada

Whether arts, culture and dining are your thing, or adventure in the great outdoors, Reno has you covered.

You can literally play in the Truckee River rapids that run through the middle of downtown Reno. If being in the water isn’t your thing, you can walk along the river and watch tubers, rafters and kayakers flow by.

The city is also surrounded by mountains, lakes and the Humboldt-Toiyabe National Forest.

From camping, hiking and rock-climbing to biking, fishing and more, Reno is an outdoor sports enthusiast’s dream.

Because Reno is a small city with a tight-knit community, it’s easy to meet people and make your voice heard through simple access to elected officials. There’s a great sense of community. Reno was also officially deemed a Welcoming City in 2017, meaning the city holds a position of inclusion and a zero-tolerance stance on discrimination.

“When I left my job as an editor for Reno’s city magazine, I had the option to move away, but I wanted to stay, so I bought the rights to Edible Reno-Tahoe and have been working my dream job since then,” said Amanda Burden, Editor and Publisher of Edible Reno-Tahoe.

5. It has a world-class dining scene, supported by a local food ecosystem.

You’ll find everything from food trucks (including two food truck festivals!) and ethnic mom-and-pops to farm-to-fork establishments. Many restaurants in Reno have menus chock-full of dishes made with ingredients sourced from local farmers and ranchers.

Reno is also home to some celebrity chefs and Michelin-rated fine dining. Mark Estee, a local chef who has been in the business for 27 years, owns five restaurants in Reno and is a huge proponent of locally sourced and sustainable food.

If given only one night to take a guest out for dinner and drinks, Amanda Burden of Edible Reno-Tahoe said she’s choosing Arario for Korean fine dining and Rum Sugar Lime for a nightcap.

6. It’s a great place to do business.

It’s also positioned to become a major tech hub as companies leave Silicon Valley in search of more affordable places to do business. The Tahoe-Reno Industrial Center is the largest industrial park in the world with over 15,000 acres that are pre-zoned and in active development. The industrial park is home to Tesla Gigafactory, Google, Switch and other major companies, spanning industries from distribution, to data centers, to advanced manufacturing, to lithium battery technology and more.

Which also means it’s a great place to find a job. The region is expected to add thousands of high-paying jobs across a range of industries over the next five years. The average salary in Reno rose in 2021 to $64,000 annually.

7. Reno is a mecca for arts lovers.

When exploring the arts scene, you might notice a tagline everywhere — Big Arts Little City —and they mean it, too. Art installations, sculptures (some from Burning Man!) and murals saturate Reno’s downtown, plus there are various art galleries and museums, including the Wilbur D. May Museum, which boasts a private collection of curios and oddities from around the world.

And the arts scene doesn’t stop there — Reno has five different theaters for performing arts, and the performances range from ballet and Broadway to the Reno Philharmonic Orchestra and even an annual Shakespeare festival at Lake Tahoe. There’s a way to enrich your life and mind around every corner in Reno.