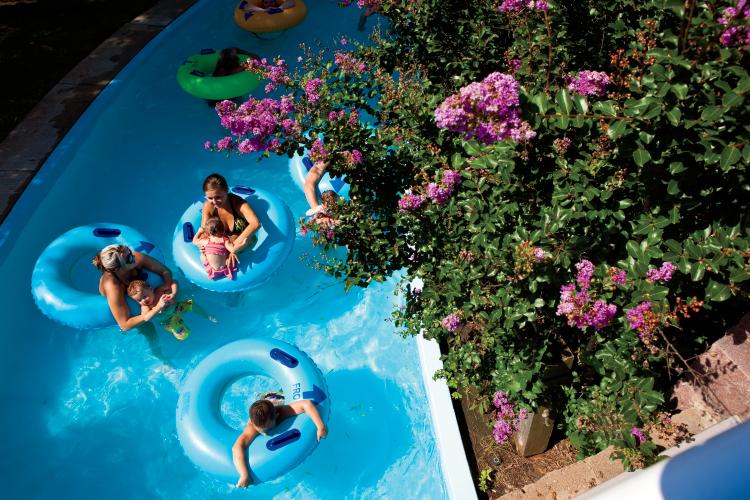 Residents of Muskogee find it easy to stay active thanks to the area’s wide range of recreational amenities. From athletic endeavors to more relaxing encounters with nature, there are lots of ways to play.

Water slides, a lazy river, a volleyball court, pools and playgrounds beckon families to come join the fun from Memorial Day to Labor Day at River Country Family Water Park, the premier spot to cool off during the summer months. The park is especially popular with families with children ages 10 and under.

Runners have extra motivation to pick up the pace during Muskogee’s annual Zombie Run, a 3-mile trail run held at The Castle where runners are chased by people dressed as zombies. Those who get to the finish line with at least one life flag still attached are deemed “survivors.”

Runners looking for a challenge will love the Port to Fort Adventure Race, a 3-person team or solo race that includes swimming, trail running and canoeing. Additional surprise aspects of the race are kept secret until race day. A separate 5k is offered for those looking to run only.

More than eight miles of trails, including Aubudon, Civitan, Henry Bresser Nature, Spaulding and Centennial give Muskogee residents plenty of places to walk and bike. The Centennial Trail, a local favorite, has two sections, one 3.1-mile loop around Love-Hatbox Sports Complex, and a 2-mile portion that connects that complex to the Oklahoma Music Hall of Fame and Three Rivers Museum in downtown Muskogee.

Perfect your backhand at any of Muskogee’s public tennis courts. Courts at Honor Heights Park, Rotary Park, and Spaulding Park are free to use, and are fenced and available from dawn to dusk.

For a taste of adventure, check out the AMA Extreme Dirt Track National Championship Series at Love-Hatbox Field. The series takes place at several different locations. This is the third year Muskogee has hosted this televised event, winning best dirt track in 2013.

Muskogee Swim and Fitness Center’s sprawling facility is complete with a weight room, aerobics studio, and a six-lane, 25-meter swimming pool. Zumba, yoga, and boxing cardio circuit classes are available. Memberships are offered but non-members are welcome to use the facility for open swimming on the weekends and other such programs. The center can be booked for private functions as well.

Avid anglers will enjoy Muskogee’s lakes, reservoirs, and creeks, such as the popular Sam Creek and Blue Creek. Fish in the area include carp, flathead catfish and walleye. Because of the area’s vast natural bounty, Muskogee has hosted the BassMaster Open Series Tournament three times.