Skip to content
Home > OK > Norman > Where to Live Now > 8 Reasons to Love Norman, OK (Besides Their Powerhouse Football Team)

8 Reasons to Love Norman, OK (Besides Their Powerhouse Football Team)

Norman, OK, is a friendly, affordable city full of great food, art and opportunity. That famous football team? Just the cherry on top. 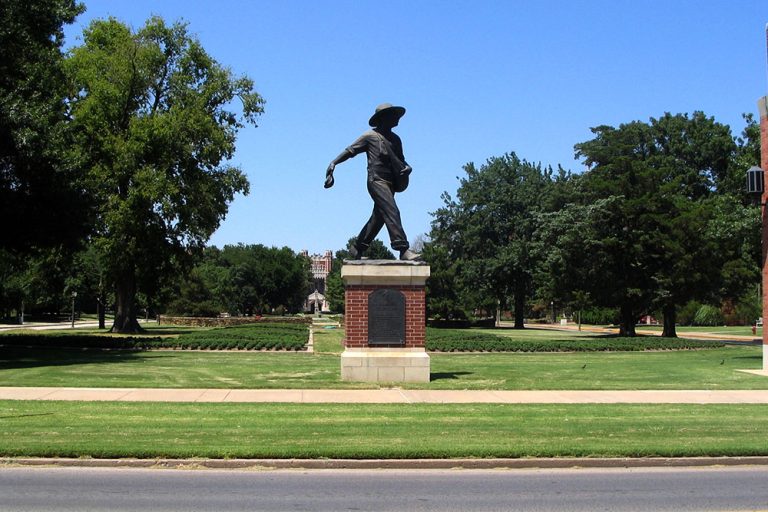 Norman / Courtesy of Majdan under a CC 2.0 license.

If you’re searching for a classic college football town, it’s tough to find one more perfect than Norman, OK – home of the seven-time national football champions, the Oklahoma Sooners. From the statues of the Heisman trophy winners to the impressive tailgating scene to the frequent celebrations after big wins, there isn’t much that compares to a Saturday at “The Palace on the Prairieâ€ (AKA Oklahoma Memorial Stadium).

While football might have made Norman a household name, this small city has a lot more to offer beyond the perfect fall Saturday. Residents and visitors who venture outside of the stadium will find a thriving arts and culture scene, great food, affordable housing and an annual music festival that rivals ones found in much bigger cities.

Looking for a great place to live or seeking out a fun weekend getaway spot? Here are eight reasons why you don’t want to miss out on Norman, the heart of the Sooner State.

One of the perks of living in a college town is the ability to access the educational opportunities at the local university, and the University of Oklahoma doesn’t disappoint. OU offers more than 170 academic programs, including degrees in the oldest History of Science program and the largest school of meteorology in the country (with access to the National Weather Center that’s located on campus).

The University of Oklahoma was also recently ranked among the top 50 public colleges and universities in the country by U.S. News & World Report and has the largest freshman enrollment of National Merit Scholars in the country.

Best Places to Live in Oklahoma

About 20 years ago, the historic downtown area in Norman had dwindled down to just a few businesses, but today it is a booming area of town that is filled with restaurants, boutiques and events nearly every night of the year.

If you’re headed to downtown Norman, you’ll definitely want to fit in a visit to Stash – a shop with unique items that also hosts monthly makers markets and a yearly Oklahoma brew festival – as well as Gray Owl Coffee, Full Moon Sushi and The Diner, a Norman institution that was once featured on the TV show, “Diners, Drive-Ins, and Dives.â€

3. World-Class Museums in a Small-Town Setting

Although Norman is a small city with a population of only 122,000, this city has an arts and culture scene that competes with cities much larger in size. Art lovers will enjoy perusing the Fred Jones Jr. Museum of Art, which houses works from artists like Paul Gauguin, Claude Monet, Ansel Adams and Georgia O’Keefe. Art enthusiasts should also stop by the Jacobson House Native Art Center, which showcases American Indian art and often hosts Native cultural events.

Have a dinosaur aficionado in your family? You might like an afternoon exploring ancient beasts and early cultures at the Sam Noble Museum, one of the premiere natural history museums in the country. From peeking at ancient millipedes to setting your sights on the Apatosaurus and the Saurophaganax – two dinos that once inhabited Oklahoma – history buffs of all ages will enjoy a day at this museum, which is located right on the university campus.

When it comes to eating in Norman, good food and cozy places to dine are everywhere. And although there’s some steep competition for the most iconic dish in Norman – the lasagna rolls at Victoria’s, the legendary queso at The Mont or the burgers at Sooner Dairy lunch – there’s no question as to what everyone will be drinking over the weekend: A Swirl.

Half sangria, half margarita and wholly delicious, the frozen Sooner Swirl at The Mont is what Normanites sip before games, on their 21st birthday parties and to cool down on swelteringly hot summer evenings out on The Mont’s patio.

Much like the rest of Oklahoma, Norman has an affordable housing market. The city recently ranked at No. 19 on Wallethub.com’s list of “Best Places for First-Time Home Buyersâ€ due to its market attractiveness, affordability and quality of life. The real estate market numbers back up that claim, with Zillow reporting that the median price of homes currently listed is under $240,000.

6. Weather a Career with NOAA

If you’ve heard anything about Oklahoma, you know that it gets more than its fair share of extreme weather. Because many consider Oklahoma to be the heart of “tornado alley,â€ it makes sense that Norman is home to the National Weather Center, which is under the umbrella of the National Oceanic and Atmospheric Administration (NOAA). That National Weather Center is one of the largest employers in town, and there you’ll find research scientists, operational meteorologists and climatologists, engineers, technicians as well as a host of meteorology graduate students – all working to understand weather patterns and technology. It’s a great place to start or continue your career.

7. The City of Festivals

When Normanites aren’t busy cheering for their home team on Saturdays, you can often find them at one of the city’s many festivals throughout the year. From eating turkey legs at the Medieval Fair to supporting local artists at the May Fair to listening to music in the park at Jazz in June, locals rarely experience a day on the calendar without a city-wide party.

The biggest event in Norman, however, is the annual Norman Music Festival, which is a free, independent music festival that has exponentially grown since it began in 2008. The festival is hosted in downtown Norman and attracts about 80,000 people for three days of performances in indoor and outdoor venues. Norman Music Festival has featured several famous indie performers over the years such as Japanese Breakfast, Polyphonic Spree, Ra Ra Riot, Portugal The Man and Of Montreal as well as a whole host of local bands.

8. A Slice of Nature in the City

You may not need to get away from much city grit while you’re in Norman, but a chance to reconnect to nature is always a treat. Sutton Wilderness, located on the east side of town, provides a peaceful place for joggers, cyclists and nature lovers to go explore 160 uninterrupted acres of prairie grass and wildflowers as well as spot wildlife like white-tailed deer and foxes. It’s the perfect place to recharge before tailgating – or after celebrating a Sooner win a bit too hard.