10 Things to Do in Oklahoma City, OK

There's plenty to see in the OKC, including the nations only museum devoted to skeletons, an entertainment district and the largest theme park in Oklahoma. 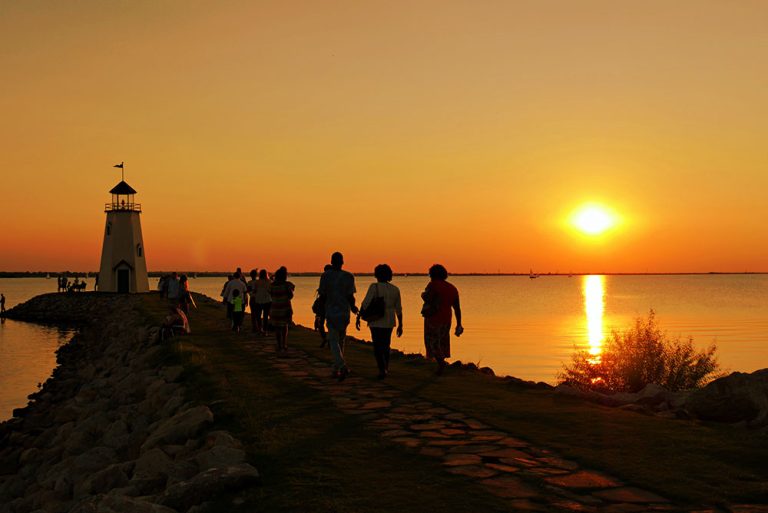 Ranked among the best places in America for careers and one of the largest cities in compliance with the Clean Air Act, Oklahoma City offers a good quality of life along with many attractions and entertainment venues.

The city’s acclaimed Western roots are on display at National Cowboy & Western Heritage Museum, with exhibits like antique firearms, a reconstructed 19th century cattle town, and a traveling Prix de West art exhibition. One of the most visited attractions is an “End of the Trailâ€ sculpture, commemorating plights along the infamous Trail of Tears.

Ranked among the most family-friendly zoos in America is Oklahoma City Zoo & Botanical Garden, open daily from 9 a.m. to 5 p.m. The zoo is known for its Great EscApe exhibit that gives visitors close-up views of gorillas and chimpanzees, while other highlights include Cat Forest/Lion Overlook, Elephant Habitat, and a Children’s Zoo with barnyard animals.

Honoring the top men and women softball players in the nation is the ASA National Softball Hall of Fame & Museum, which pays tribute to 360 inductees. Admission is free and the complex welcomes visitors seven days a week, although closed weekends from October through April. The site also hosts the annual NCAA Women’s College World Series.

6. The Museum of Osteology

The only museum is the nation devoted entirely to skeletons is The Museum of Osteology, exhibiting hundreds of skeletons collected from throughout the world. On display are human bones along with those belonging to animals such as reptiles, flightless birds, marsupials and Oklahoma wildlife. One of the most popular galleries is comprised of carnivore skeletons.

Oklahoma City National Memorial & Museum remembers the 168 people killed by Timothy McVeigh in April 1995. McVeigh parked a truck filled with explosives in front of the Alfred P. Murrah Federal Building, and the massive explosion sheared the multi-story building. The surviving structure was eventually demolished to construct the memorial.

With a wave pool and 11 water slides is White Water Bay, an ideal destination during the warm-weather months. Highlights of the theme park are slides like Acapulco Cliff Dive, Cannonball Falls, The Big Kahuna as well as Bermuda Triangle that drops inner tube riders seven stories at speeds reaching 35 miles per hour.

A 55-foot tower of twisted and colorful Chihuly glass greets visitors upon entering Oklahoma City Museum of Art, which houses one of the largest collections of Dale Chihuly glass in America. Also on display among the three floors of galleries are 19th century European art, Latin American paintings, and unusual progressive sculptures.

In the northwestern part of Oklahoma City is Lake Hefner, ranked among the top 10 inland sailing destinations in the United States. Besides sailing, the reservoir is a popular fishing spot, populated with bass, catfish, walleye and bluegill. Another recreation option is 10 miles of bicycle trails that surround the lake.