Oklahoma City’s Arts Scene Deserves a Chance to Surprise You

From music and dance to avant-garde visual arts, Oklahoma City's arts scene is unexpected in all the best ways. 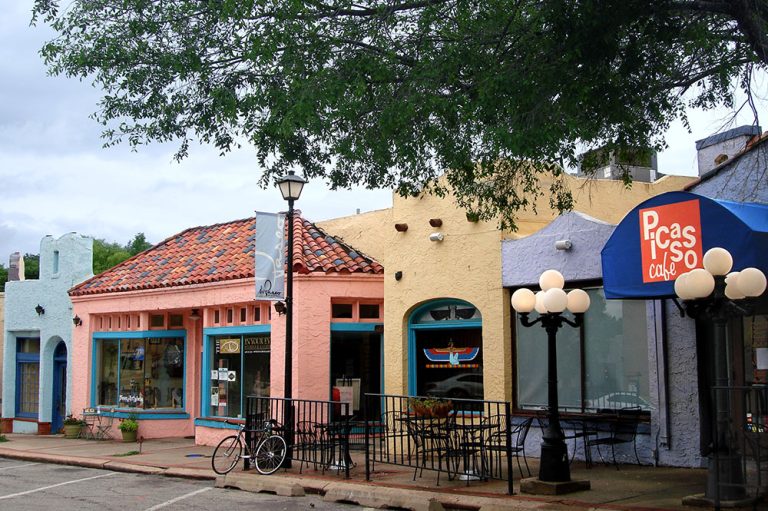 Courtesy of MARELBU under a CC 2.0 license.

When you conjure up an image of a thriving arts scene, your mind might immediately take you to the world-renowned museums in New York City, the film industry in Los Angeles, or even the cutting-edge visual arts scene in Santa Fe. The last place you might think of for opportunities in art, music, dance or film is Oklahoma City, Oklahoma, but OKC’s arts scene deserves a chance to surprise you.

From experimental visual arts to classical ballet to deadCenter, an annual independent film festival, and avant-garde art shows, OKC has a lot of surprising and unique opportunities for those who enjoy creating and viewing art – or simply being surrounded by creative people who are committed to doing things differently.

Whether you’re an artist looking for a new city to call home, or an art lover seeking an inspiring (and unexpected) weekend destination, here is just a small sampling of Oklahoma City’s vibrant arts scene.

One of Oklahoma City’s newest and most interesting platforms for artists is Factory Obscura, which describes itself as an art collective creating immersive experiences in full-sensory environments. The art collective has 40 participating artists, including painters, sculptors, dancers, musicians, poets, actors and even lighting specialists.

Now just a little over a year old, Factory Obscura has managed to blow the lid off the Oklahoma City arts scene and has already given the city plenty to talk about after its first “experienceâ€ called SHIFT, which opened in November 2017. SHIFT can best be explained as an artist-created immersive wonderland that comprised the various levels of human consciousness – all within 1,200 square feet of studio space.

“The best way to describe what we mean by immersive is that it is a whole environment, an alternative world, that is entirely made by artists. When you walk into it you become a part of the work by being in the space. We want you to interact, play, and discover things,â€ says one of the founders of Factory Obscura, Kelsey Karper.

Around 20,000 visitors came to see SHIFT and there were often lines around the building to get in. Their next experience, called BEYOND, opens in September 2018 and promises the same kind of experiential art, only this time the subject will be the mysteries of the universe.

Karper says this experimental collective has been successful in large part thanks to the tight-knit OKC artist community – and the willingness for these artists to get to work right away.

“Oklahoma City especially has a really strong and supportive arts community,” says Karper. “Because of the network of support we have cultivated amongst the arts community, there is room for people to try things without fear of failure.”

Individual Artists of Oklahoma: The Backbone of Avant-Garde OKC Art

The Individual Artists of Oklahoma, or IAO as they’re known, is one of the staples of the creative community in Oklahoma City. Founded in 1979, IAO is a grassroots organization that supports artists of all genres who go against the grain and push boundaries.

The IAO gallery hosts 10-11 visual art exhibition openings every year and two or three group shows. But most importantly, IAO is a support network for local artists.

“One of the things I’ve always enjoyed about the Oklahoma City arts scene is the openness among artists. We aren’t all sculptors, scenic painters, collage artists or visual artists,” says IAO board member David Smith (AKA Spontaneous Bob). “And it’s not uncommon to have a group of visual artists to show up at poetry reading. We have an underlying camaraderie across styles and formats that is great.”

What began as a small shopping district north of downtown Oklahoma City in the 1920s has become a funky and eclectic art hub known as the Paseo Arts District. The Paseo is home to 22 galleries that feature the creations of over 80 artists. The Paseo Arts Association also hosts a monthly art walk as well as an annual arts festival.

In addition to providing the gallery space for artists to show their work, the Paseo Arts Association has unique opportunities for artists to finely tune their craft by hosting juried exhibitions and sponsoring a highly coveted artist-in-residence program. The Paseo has partnered with the Skirvin, a downtown luxury hotel, to create an urban artist-in-residence program called SPACE, which includes a year-long residency at the Skirvin Hilton, a working art studio and gallery that’s open to the public, a $1,000 stipend, meal allowance and parking. Past winners have included a collage artist who works with vintage illustration books and magazines, an encaustics (wax) artist, a poet who specializes in book binding, and a violin restoration specialist.

10 Things to Do in Oklahoma City, OK

The Paseo Arts District is also a work of art itself and is lined with colorful buildings in the Spanish revival style. In fact, the Paseo District is probably one of the most Instagrammed areas of Oklahoma City – and it’s not at all surprising to see visitors and locals posing for the camera in front of one of the vibrant buildings.