Skip to content
Home > OR > Eugene > Experiences & Adventures > 8 Reasons to Move to Eugene, OR

8 Reasons to Move to Eugene, OR

Great schools, craft beer, and outdoor recreation options are just a few things that stand out for this college town 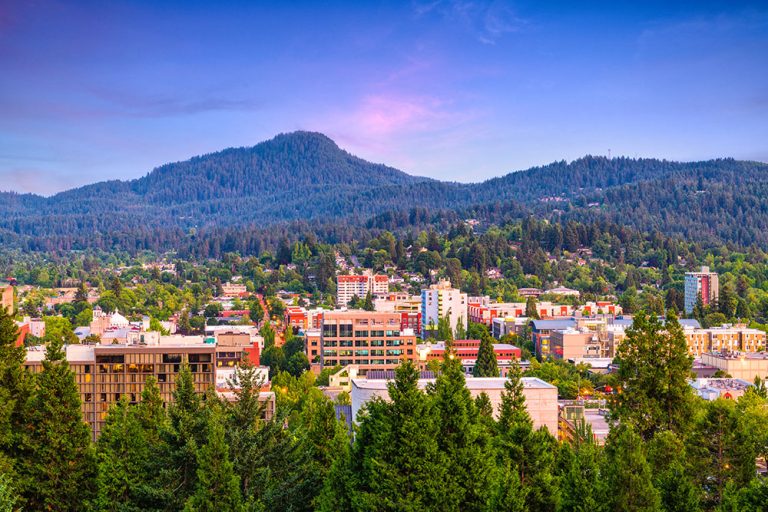 What do Division I athletics, Nike, craft beer, delicious dining, the mountains and the ocean all have in common? The great city of Eugene OR that’s what. Affectionately known as the “Emerald City,” this college town is nestled in the Willamette Valley and boasts great primary and secondary education, safe and friendly neighborhoods and the ability to bike and walk most everywhere. It’s also a three-time feature on our list of the 100 Best Places to Live (2014, 2015, 2016). Here are 8 other reasons why Eugene is one of the best places to live in America:

If you’re in need of some fresh air and breathtaking nature, you’ve come to the right place. Eugene is full of hiking and running trails and thick forests all across the city, along with impressive mountain views. Visit the famous Spencer’s Butte Park where you can hike the Ridgeline Trail System and even make your way to the Butte’s summit at 2,055 feet. Other peaks worth checking out include Mary’s Peak, Mount Pisgah, Jasper Park and many more in and around Eugene. If you’re a Prefontaine fan you can visit Hendrick’s park which is east of downtown and known for its rhododendron garden and memorial to Prefontaine known as “Pre’s Rock.”

Eugene is home to the University of Oregon (Go Ducks!) which boasts more than 23,000 students and 300+ undergraduate and graduate degree programs across a wide range of disciplines. The fighting Ducks are best known for their football and track and field success, thanks to legend and local hero Steve Prefontaine.

5 Best Cities for Families in Oregon

Thinking of moving to Oregon? These awesome, affordable cities are perfect places to raise a family.

3. Proximity to the Ocean

You can get from Eugene to the town of Florence on the coast of Oregon in less than 1.5 hours, making a day at the beach easily within reach. Florence is an old mill town with a quaint downtown and lovely shops and restaurants.

These small cities and towns are giving Portland a run for its money as the country’s #1 biking city.

Home to three of Oregon’s official scenic bikeways, Eugene is a bike mecca. It all started back in the ‘70s when the city created one-of-a-kind biking, walking and running trails, making it one of the most bike-able cities in the nation – even compared to well-known bike cities such as Portland and Seattle.

Eugene is a college town so there is no shortage of pizza, burritos and burgers to satisfy all those Oregon Ducks. Aside from all the “college spots” Eugene boasts some pretty impressive and delicious dining establishments including the crowd-pleaser, Off The Waffle, where waffles are made from a special yeast-based dough combined with pearl sugar that caramelizes when it cooks for a decadent crunch. Up for some Italian? Try Beppe and Gianni’s Trattoria, or the quant, cozy Excelsior Inn. Another big thing in Eugene is Tofu. The best is Toby’s Tofu, which was established in the ‘70s and is now a household name in Eugene.

There are two school districts within Eugene. The most notable is the 4J district that serves most of the city with 16,500 students across 18 elementary schools, seven middle schools and four high schools. Eugene offers a “school of choice” policy where parents can choose which school they would like their kids to attend. Greatschools.org gives the district a 7 out of 10 rating.

Eugene is the birthplace of Nike and thanks to its connection to the shoe behemoth, Eugene has become known as “Track Town, USA.” Everybody runs in Eugene it’s ingrained into the DNA and fabric of the city. It’s even home to Hayward Field, which is considered to be one of the premier tracks in the country – many Olympic track and field trials have been held there.

You could spend weeks exploring the gorgeous Oregon Coast. Don’t have that long? Check out these can’t-miss spots.

Eugene is quickly becoming a “beer town,” and compared to other fancy beer cities, the libations in Eugene are easy to come by and relatively cheap. Check out Falling Sky Brewery, Ninkasi, Oakshire, The Bier Stein or 16 Tons and City Brewing, you won’t be sorry!