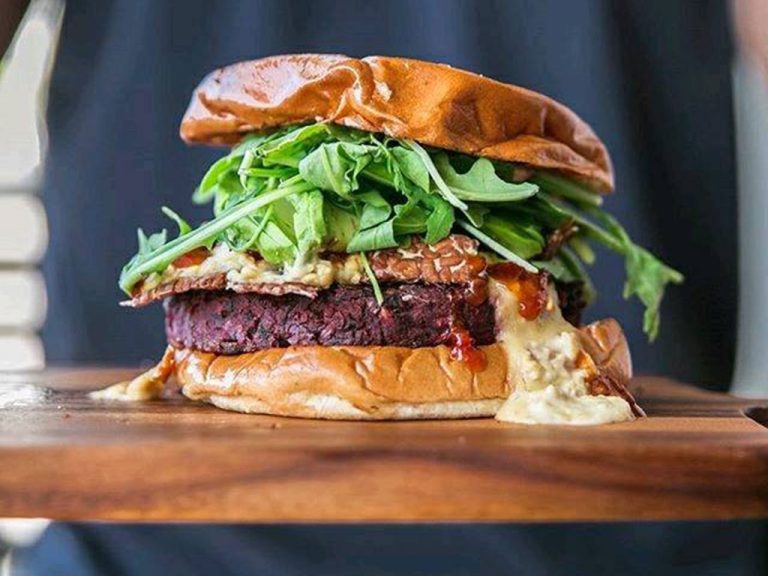 With the number of vegans in the U.S. on the rise, there’s no mistaking the need for great restaurants serving up delectable plant-based meals throughout the country. Luckily for foodies of every stripe, vegan food can be as delicious as any meal made for omnivores. Want proof? Check out the mouthwatering offerings in these vegan-friendly U.S. cities, making it easier for visitors and residents alike to “go veg.”

Orlando recently made history as the most visited U.S. destination, with a whopping 72 million visitors in 2017. Both visitors and long-time residents have plenty of vegan options here – even in the city’s famous theme parks!

That’s right: there is now an all-vegan bakery, Erin McKenna’s Bakery NYC, at Disney Springs in the Walt Disney World Resort. (Pro tip: anyone can access Disney Springs. You don’t have to buy admission to the theme park.) Likewise, Universal offers a wide variety of vegan doughnuts at VooDoo Doughnut at Universal CityWalk.

The Most Unique Food Festival in Every State

We scoured all 50 states to pinpoint the most far-fetched food festivals in each state. Here’s where to find them.

If sweet treats aren’t your thing, the savory vegan options around Orlando are equally impressive. Enjoy choosing from a special vegan menu that includes vegan crispy tofu and vegan omakase nigiri at Dragonfly Robata Grill and Sushi. All-vegan restaurants can also be found around the city. Loving Hut is a casual, counter-service restaurant serving a wide assortment of foods from vegan sushi to sizzling vegan “drumsticksâ€ to barbecue dishes. Other vegan eateries include Ethos Vegan Kitchen in Winter Park.

Ann Arbor isn’t just one of our best places to live; it’s also home to a thriving (and growing!) vegan food scene. The Detroit Street Filling Station is a fun, casual restaurant with delicious food that uses a portion of its funds to support the Youth Justice Fund. The Lunch Room Diner & Canteen is also excellent and serves only vegan food. Seva is an all-vegetarian local restaurant that serves various dishes, from veggie burgers to pasta.

Los Angeles is the home of many vegan celebrities who proudly proclaim their devotion to the animal rights movement, and the city’s commitment to veganism goes much deeper than a food trend. Los Angeles showed the world how delectable a vegan restaurant scene could be with eateries such as the all-vegan Real Food Daily, which opened its doors in 1993. Today, there are dozens of vegan restaurants in or near the city.

5 Farm Stay Vacations You Must Try

Try a trip off the beaten path at one of these farm-friendly vacations.

Plant Food + Wine in Venice offers a seasonal vegan menu served in sumptuous surroundings and, as its name suggests, provides an equally diverse wine menu for pairing the perfect wine with your meal. Other vegan restaurants in Los Angeles include the Sage Plant Based Bistro and Brewery and Crossroad Kitchen. Los Angeles also offers lots of community support with vegan groups, food festivals and opportunities to get involved in animal rights activism.

Nashville is the capital of Tennessee and a southern city with a rich musical history and diverse food scene. Many vegan-friendly eateries can be found in Music City. The adorable, cheery and aptly named Sunflower Café offers a diverse vegan menu. Grins Vegetarian Café on the Vanderbilt campus serves up vegan dishes for breakfast, lunch, and dinner. The Wild Cow and Graze Nashville can’t be missed.

Looking to get involved in the local vegan/vegetarian community in Music City? The annual Nashville VegFest at the Nashville Fairgrounds celebrates plant-based eating and a cruelty-free lifestyle.

While this part of North Carolina is nicknamed Land of the Sky, Asheville could also be called Land of the Ground for all the plant-based options it offers. Asheville is a vegan beacon of the South. Situated in the Blue Ridge Mountains of western North Carolina, the lovely city features a vast, dynamic array of vegan menus and a supportive vegan community, too. You can find vegan refreshments at many local movie theaters, and most restaurants strive to meet the needs of the many vegans in the area with creative dishes that go far beyond salads.

Want to sample creations from the country’s best chefs without battling the crowds in South Beach? Add these under-the-radar festivals to your calendar.

Plant, an upscale restaurant in the city, offers an eclectic, seasonal menu that is 90 percent organic and always plant-based. Other all-vegan restaurants in Asheville include Bean Vegan Cuisine, which dishes southern comfort foods, and the Laughing Seed Café, that offers up dishes such as vegan sushi and sandwiches. Beyond the great food to enjoy, animal-loving vegans may also want to visit the Animal Haven of Asheville or the Brother Wolf Animal Rescue.

With its incredible natural beauty and majestic mansions, Lake Geneva is a resort city that is as modern as it is connected to its rich history. It has a 21-mile lake walking path that’s popular among visitors and locals, and its vegan scene is also growing. Case in point? I had one of the best veggie burgers of my life (and I’ve eaten hundreds of veggie burgers) at Lake Geneva’s Simple Café.

The Grandview Restaurant at The Geneva Inn can create a menu for vegans and many vegan-friendly eateries such as the Egg Harbor Café and Sopra Bistro. Animal lovers can also visit nearby sanctuaries like the Valley of the Kings Sanctuary and Retreat.

It’s hard to find an American city that’s more on the cutting edge of every dining desire than New York City. The vegan scene here is beyond incredible. It’s hard to walk down the storied treats without coming across a vegan restaurant or at least one with a vegan menu.

If the word “blossom” reminds you of the fabulous Mayim Bialik, you’re not alone. As a vegan, she might approve of Blossom, an upscale vegan restaurant on 9th Avenue in Manhattan that serves delectable dishes with meat substitutes for lunch and dinner. The original locale of Erin McKenna’s Bakery NYC is also in the city. Clementine Bakery also serves up sweet treats for vegans. (Non-vegans are sure to love them, too!)

In addition to the world-class vegan restaurants, it’s easy to discover multiple vegetarian and vegan food festivals and community events throughout New York City. The vegan community is strong in the city, too, with Victoria Moran offering vegan classes through Main Street Vegan. Vegans in the city can even get away from it all by spending time at the Red Robin Song Guest House, set on an animal Sanctuary a few hours north of Manhattan.

With an official slogan that declares it a “great city for the arts and outdoors,” Eugene might want to add one more noun to that list: vegan food. Oregon is an overall vegan-friendly state, yet vegan visitors are sometimes surprised to find all the options available in the relatively small city of Eugene.

From food carts to fancy restaurants, vegan eateries in the city offer fun environments while serving up yummy plant-based fare. The all-vegan Cornbread Café offers hearty comfort foods made in healthier ways. The Lotus Garden is a vegan restaurant where you can find many mock meat dishes. Eugene isn’t new to the veggie scene, either. Its Morning Glory Café is the oldest vegetarian and vegan café in the area and has been around since 1996. There is also a solid vegan community, with vegan festivals and events frequently held in and around the area.