Nature’s Playground Can Be Found in Greater Chattanooga 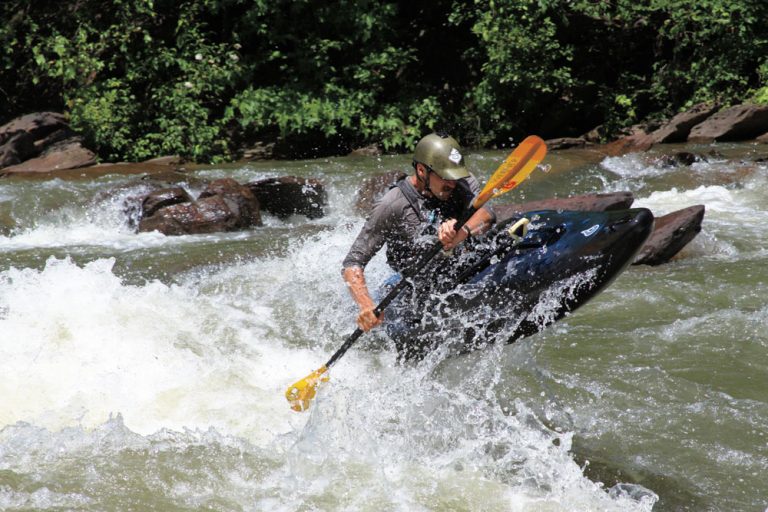 Over the river and through the woods is more than just the directions to grandmother’s house, it’s also an accurate description of a day spent outdoors in the Greater Chattanooga area. Throw in rock climbing, cave exploration and a bit of river snorkeling – yes, river snorkeling – and you begin to understand why Outside magazine has twice named Chattanooga “The Best Town Ever.”

“If you love the outdoors, you’ll love Chattanooga. There’s definitely a lot going on around here,” says Anna George, vice president of conservation science and education at the Tennessee Aquarium. “We have amazing rivers for all different skill levels, whether it’s whitewater kayaking or calmer, flatwater paddle boarding. There are great hiking and bike trails, rock climbing and camping spots. There’s just a ton of different things you can do if you want to be outside.”

Rolling On the River (and Land)

For those who relish outdoor adventure, active lifestyle opportunities abound in Greater Chattanooga. Whitewater adventure awaits on the Ocoee River, while Hiawassee River offers more subdued paddling opportunities. For hiking enthusiasts, the Walls of Jericho near Hytop in Jackson County, Ala., features a 6-mile roundtrip hike that includes a nearly 1,000-foot descent to the valley floor and into a picturesque rock amphitheater setting (the Walls) with a 35-foot waterfall. Reader’s Digest named the trail one of the top 20 hikes in the nation.

Other outdoor highlights include the Jack’s River Trail in the 37,000-acre Cohutta Wilderness in northwest Georgia, an excellent trail for beginning backpackers, with 20 to 40 water crossings. The region also offers the Eureka Trail near Athens, Tenn., and the Mountain Goat Trail near Sewanee, Tenn., which includes paved rails-to-trails routes for hikers and cyclists. The region’s history can be experienced on the drive along the Trail of Tears from Bradley County, Tenn., to Blythe Ferry in Meigs County, Tenn.

And for something completely different, the water in the Hiwassee and Conasauga Rivers is so clear that is has become a popular snorkeling location, with trips organized by the U.S. Forest Service.

“People are used to snorkeling in the ocean, but they don’t realize you can snorkel in some of our rivers and see the native freshwater fish,” George says. “Tennessee and Alabama have more species of freshwater fish than anywhere else in the U.S., so this is an incredible gem in our backyard. And it’s a growing activity. If you go out to those rivers on a summer weekend, you’ll see people who have just jumped in with a mask and a snorkel.”

For much of the 20th century, Greater Chattanooga was best known as being the home of Rock City, the scenic attraction located atop Lookout Mountain that was heavily promoted throughout the Southeast with a series of advertisements on billboards and barns.

That notoriety is appropriate, because Greater Chattanooga truly is a rock city. Surrounded by the Appalachian Mountains and the Cumberland Plateau, the region is filled with recreational opportunities for stone heads, both above the ground (Climbing magazine dubbed Chattanooga “America’s New Climbing Capital” in 2015) and under it (more than 7,000 caves are within 60 miles of downtown).

“We have some of the best and deepest caves in the world,” says Christine Rose, whose company G3 Adventures offers guided cave tours. “You could be underground for years in this area and still not see everything there is to offer. There are caves where you have to slide and squeeze through small spaces, and there are some with openings as big as a football stadium. There are wonderful rock formations and waterfalls. It’s like nature’s playground.”

One of the most popular locations is Sitton’s Cave at Cloudland Canyon State Park in Dade County, Ga. The main cavern is approximately 1-mile long with an underground river running through it. “It’s really beautiful, and it’s great for beginners and families who are looking for a new adventure,” Rose says.

In 2015, Chattanooga tourism spending topped $1 billion for first time, and much of that was due to the growing popularity of outdoor recreation. In order to maintain these natural resources for future generations, the region has emphasized conservation and preservation by working with a variety of organizations. This includes river research through the newly formed Tennessee Aquarium Conservation Institute (TNACI).

“We have a lot of work going on where we’re raising endangered species so we can release them back into the water,” says George of the Tennessee Aquarium, who also serves as TNACI director. “We do research projects to understand where different animals are located so we can do a better job of protecting the specific habitats that they need. We do a lot of work throughout the community in both raising awareness of these animals, and to get better protection for the water that they live in.

“Outdoor recreation tourism is essential to Chattanooga’s economy, but it has to be thoughtful tourism. Making sure we’re enjoying the world in ways that enhance it and further protect it. Because you can’t have a healthy economy without having a healthy environment underpinning all that.”