Some of your favorite foods to feast on are actually from the Volunteer State. 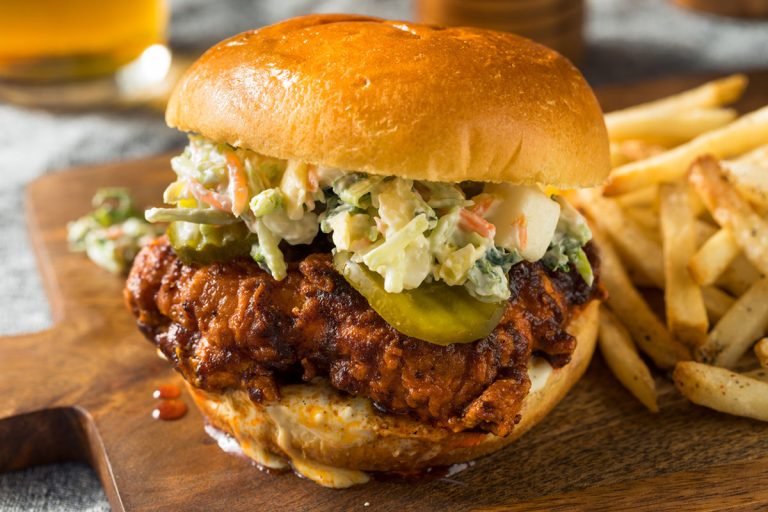 A Tennessee visit isn’t complete until you sample some of its classic dishes. Enjoy the state’s big-hearted hospitality as you indulge in treats ranging from the barbecue and soul food in Memphis to the folksy cooking of the Appalachians. The iconic foods are simple, spicy, sweet and lightning hot.

Surrounded by two large catfish farming-producing states, Tennessee boasts this delicious swimmer at diners, fish shacks and barbecue joints. Unlike mundane, generic frozen fish sticks, the Volunteer state’s fresh cornbread battered catfish is fried to a golden crisp and is crunchy on the outside but tender within. It’s a must-try!

Get ready for sweaty skin and watery eyes when you bite into this hotter-than-hot flavorful fried chicken. What started as a woman scorned exacting her revenge on her philandering husband has become a nationwide sensation. Those in the Music City are absurdly proud of this dish: they even celebrate it annually with a festival of local bands, beers and amateur chef competition. What’s so special? This addictive crispy bird is fried in cayenne pepper. Diners usually choose between hot wildfire options for the bold and mild choices for the timid. Try it with Southern greens, mashed potatoes and sweet corn.

Prince’s Hot Chicken Shack: This beloved spot is the place that started it all. According to the legend, Thornton Prince’s wife concocted a wildfire recipe to burn the helloutta his mouth as punishment for his reputation as a ladies’ man. The following day, Prince was served chicken doused in hot pepper to teach him a lesson. Her plot backfired, though, and he loved it so much that he began serving it to all of his friends and thus, Nashville’s famous hot chicken was born. (Nashville, TN)

While many cities lay claim to having the best barbecue, the state of Tennessee offers up serval varieties that will whet just about anyone’s whistle. Chopped whole hog and pork shoulder with a vinegar-based sauce are famous in the east, whereas the west features both dry and wet pork ribs. The dry ribs are rubbed and then smoked, while the wet ones are basted during the smoking process – it doesn’t sound like a huge difference…but trust us, it is!

What makes Tennessee barbecue unlike anywhere else? The sauce! Enjoy a variety of sauces and rubs throughout the state and signature sauces from popular spots, like the Historic Lynchburg Swineapple sauce and the Loveless Cafe’s Peach BBQ sauce.

Central BBQ:  A statewide favorite, Central BBQ is located in the hardwood capital of the world and uses hickory and pecan woods and a dry rub to craft the most tender meat you’ve ever eaten. The Memphis-based spot recently expanded operations to the Middle Tennessee area, so there’s no reason not to try one of their pork plates. (Memphis, TN)

Peg Leg Porker: This family-owned and operated shop has been a mainstay for nearly a decade. Pitmaster Carey Bringle was asked to cook at the prestigious James Beard House two times, so you know this barbecue is the real deal. The restaurant’s meats are smoked fresh daily, and the delicious sides are made from scratch. Even more? This popular spot uses local bakeries for bread and desserts and spreads the love across the community. (Nashville, TN)

Edley’s: Low and slow is the motto at this joint. Edley’s serves up a distinct barbecue that will leave guests returning for more, using Southern white oak as part of the smoking process. Their signature? Edley’s Nashville Style BBQ is pork shoulder marinated for 24 hours in habanero pepper mash and then smoked for 12 hours. And, in true Nashville fashion, it’s served up with jalapeno slaw and ghost BBQ sauce. The restaurant also has locations in Chattanooga, TN. (Nashville, TN)

According to lore, the Chattanooga Baking Company concocted this treat to please a coal miner who asked for a portable snack “as big as the moon.” These delicious treats are made up of two round graham cracker cookies with marshmallow filling in the center and then dipped in a chocolate coating. Think of MoonPies as a non-messy s’more that doesn’t require an open flame!

Lucky for you, MoonPies can be found nationwide at various retailers, including Walmart, Costco and Walgreens.

Also known as the Tennessee Mountain Cake, this stacked cookie dessert originates from earlier days in Appalachia. When a girl was getting married, all the neighbors attending the wedding would bring one layer to the ceremony. The cake was assembled, and the number of layers indicated the bride’s popularity. These intricate cakes are time-consuming and consist of spicy cookie layers sandwiched together with a soft apple filling. Today these tasty treats are refrigerated overnight so the apple filling can seep into the cinnamon cookie layers.

The Village Bakery: For more than 30 years, the Village Bakery has served up delectable desserts, including the popular Tennessee Stack Cake. The bakery only uses Tennessee green apples from orchards just a few miles from the Smoky Mountains and then hand peels, slices and cooks the apples before spreading them between the cake’s layers. Don’t fret! If you’re not in the area, you can have one of these delicious treats shipped directly to your door. (Knoxville, TN)

Tennesseans are fascinated with this soft, crumbly bread. So much so that the state hosts the annual National Cornbread Festival in the small town of South Pittsburg. The festival features a cornbread cookoff, tours of the legendary Lodge Cast Iron factory and a cornbread eating contest. This festival is all about cornbread creativity, and notable recipes include a spicy fried green tomato cornbread, Callahans’ apple caramel cornbread and a sweet coconut pecan concoction.

One of the most notable exports from Tennessee is whiskey. Prohibition nearly destroyed the whiskey industry in Tennessee, and Jack Daniel’s and George Dickel were the only two whiskey distillers in the state to survive. For a whiskey to be considered ‘Tennessee whiskey,’ it must follow several requirements, including using the Lincoln County process where whiskey is steeped in or filtered through charcoal chips before aging.

The Jack Daniel’s Distillery: Spend the afternoon touring the world-renowned distillery and sample some fan favorites. Funnily enough, Jack Daniels is one of the world’s largest producers of Tennessee Whiskey, but it’s produced in a dry county! (Lynchburg, TN)

This classic breakfast combo can be found in some form in nearly every Southern state, but legend has it that biscuits and gravy originated in Southern Appalachia in the 1800s. At the time, the biscuits were dry, brittle and flavorless and in an attempt to make them more palatable, folks drowned them in sausage gravy. Cheap and laden with extra calories, the gravy was perfect for the workers lifting heavy logs and spending hours on end doing physical labor. Today, the brittle bread has been replaced by flaky buttermilk biscuits that are good enough to enjoy on their own but are even better when topped with sausage gravy.

Loveless Cafe: Carol Fay Ellison, lovingly known as the ‘Biscuit Lady,’ put the Loveless on the map and tested her skills against culinary giants like Bobby Flay and Martha Stewart. So many people want to get their hands on these mouth-watering biscuits that the Loveless makes upwards of 10,000 biscuits daily! (Nashville, TN)