Office space in Franklin goes quickly, but more is on the way. 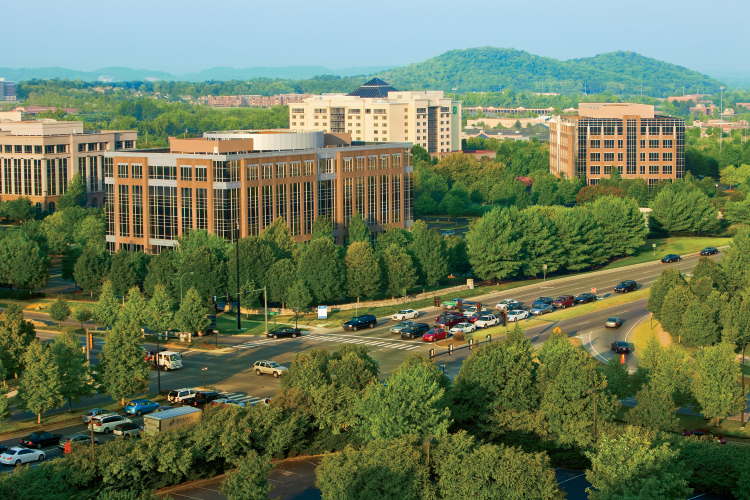 Most office complexes are buildings with parking lots, but officials at Boyle Investment Company of Nashville wanted their Meridian Cool Springs office park to be more like a neighborhood.

“We went with a mixed-use concept of developing the environment outside of our office buildings," says Thomas McDaniel, partner with Boyle Investment Company. "We could have constructed six large buildings but settled on eight smaller buildings within a campus that also has two hotels, nine restaurants, a bank, dry cleaner and barber shop.”

Meridian is just one example of the innovative development occurring in Williamson County's commercial center, which continues to be one of the strongest geographical office markets in Tennessee. New projects in various stages of planning and construction provide businesses the opportunity to locate their employees in areas that also offer recreation, entertainment and housing. They're filling up fast.

“Cool Springs office space is so attractive that there is currently more than 95 percent occupancy, which is a very high percentage,” says Matt Largen, president of the Williamson County Chamber of Commerce. “Probably the hottest construction areas of Cool Springs these days are along Carothers Parkway as well as McEwen Drive.”

Highwoods Properties and SouthStar LLC are developing a mixed-use project on 145 acres on McEwen Drive at Carothers Parkway, with plans for 1.3 million square feet of office space along with shops, housing and a hotel. Duke Realty Corp. owns prime undeveloped acreage at the intersection of Carothers Parkway and Liberty Pike, while Southern Land Company has been constructing a mixed-use office/retail/restaurant complex along McEwen Drive at Mallory Lane.

Spectrum Properties/Emery is constructing a 71-acre mixed-use office complex called Franklin Park along McEwen Drive just east of Interstate 65. The complex will include five office buildings, shops, an apartment building and an 11-acre park complete with a 600-seat amphitheater.

Two Adding to One

And off Carothers Parkway just northeast of McEwen Drive, Crescent Resources plans the Two Greenway Centre office park on the heels of its One Greenway Centre that Crescent constructed in 2009-2010. Crescent is also the master developer for the nearby Venue at Cool Springs, a 428-unit luxury apartment community.

Back at Meridian, on the northern end of Carothers, Boyle recently completed construction of a speculative two-story building. McDaniel considers it "chance-taking" in what is still a sluggish national economy.

"But Meridian has been so popular that we anticipate no problems leasing all those final office spaces,” he says.