The Legend of Puckett’s Grocery and Restaurant

A look at the rise of Puckett's Grocery and Restaurant from a small Leiper's Fork location to a Middle Tennessee phenomenon. 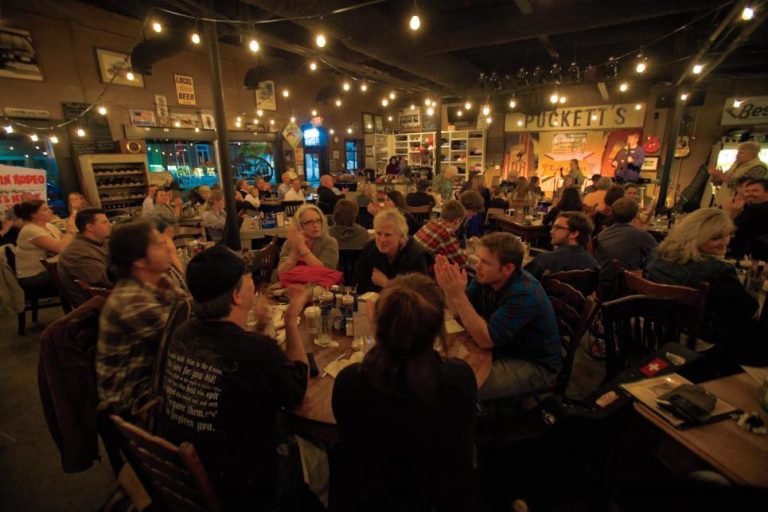 As a young man, Andy Marshall felt his future involved following in his father’s footsteps, never imagining he’d be among the most successful restaurateurs in Nashville.

“I was raised in the grocery business,” Marshall says. “I started working in the back room at 14, by 16 I was in produce, by the time I went to college it was all I knew.”

Today Puckett’s, with five locations, a food trolley, two event venues, and a high-end restaurant concept, Gray’s On Main in Franklin, thrives. Marshall, his wife Jan, and his team and family (who overlap) are committed to great food, solid entertainment and keeping customers happy.

Marshall bought his first grocery store at 26, and went on to own four, win business awards and serve as president of the Tennessee Grocers Association. Along the way, he found himself longing for something different. After his father’s death, he and his wife opted to sell their holdings and start over, debt-free. After some soul-searching, at the advice of inspirational author Dan Miller, Marshall followed his passions. In practical terms, that meant buying a grocery and community cafe business in tiny Leiper’s Fork in 1998 and transforming it.

“I’d always loved the prepared food side of the grocery business,” Marshall says. “I started cooking and loved it. I got to explore the meat ‘n’ three lunches, breakfasts, burgers, really get to know how to make good barbecue – still the most popular item on our menu. Little by little, we moved the shelves out and more tables in. Then we added music, and started building on it as a nighttime location. We got a good reputation and the beginnings of a brand.”

With the Leiper’s Fork success, Marshall believed he needed to do something new, so he opened a Franklin location on  Fourth Avenue South, leveraging the goodwill he’d built and his solid concept. With a diverse menu, a bar complete with local brews on tap and regular music, that location continues to thrive, as do three other spaces – Puckett’s Boathouse in Franklin, Puckett’s in Nashville at the Avenue of the Arts and one in Columbia. In 2008, Marshall sold the Leiper’s Fork location to Rob and Shanel Robinson.

In 2011, Puckett’s launched its own answer to the food truck craze with Puckett’s Trolley, which Marshall says came to him at 3 a.m. “I was lying in bed and it just hit me!” he says.

Now, Puckett’s holdings include a beautiful warehouse event space in Columbia, Tenn. Marshall plans to buy the antebellum Homestead Manor in Thompson’s Station, turn it into a restaurant and build an event barn; he’s also looking into sustainable aquaponic farming on the land. Meanwhile, Gray’s on Main, a higher-end Franklin locale, has built a fine reputation based on its excellent music and original cocktails. Coming soon will be a wine bar, patio, and outdoor cigar area at the Boathouse.

“Brick and mortar spaces are easy to find,” says Marshall. “But our real growth comes from quality employees, and when we find ourselves overloaded with talent, that’s when we look to do more expanding.”

Visitors rave about the food at Puckett’s, and that’s the whole point. Of course, they often come in for the music, but it’s the whole package that keeps them coming back, whichever location they prefer.

“They have the best sweet potato fries and veggie burger around,” says Karol Lahrman of Franklin. “And they epitomize the charm of the South – eat and enjoy!”

“I also love the cherry pie when they have it, but I try not to eat as much of it,” he says ruefully. “It’s great food and great service.”

“Doesn’t matter what type, it’s a near religious experience.”

Downtown resident and artist Sandy Spain says, “I really like the one at Fifth and Church in Nashville best. The food is excellent and service is fantastic.”