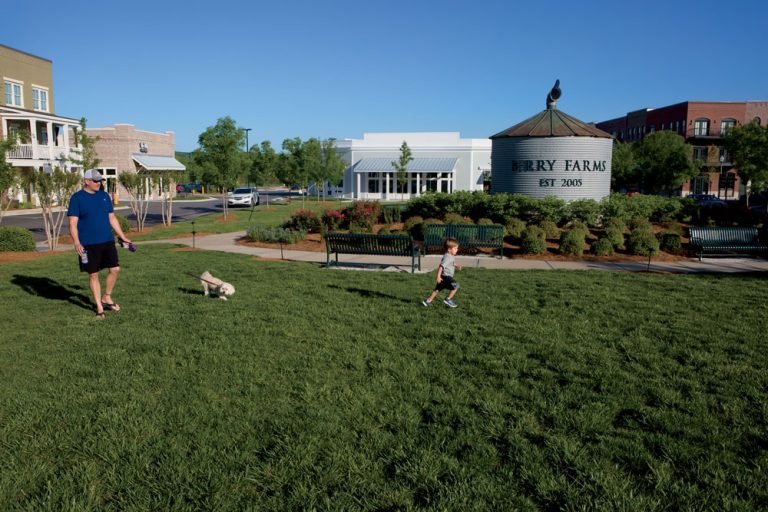 Like the rest of Nashville and Middle Tennessee, Franklin is a rapidly growing community with a proud history and historic assets that continue to enrich the community, from both a cultural and aesthetic perspective. Thanks to next-generation corporate spaces, thoughtfully planned mixed-use developments, and commercial businesses making use of historic properties, Franklin is realizing highly intentional growth that is meeting the needs of its growing population while retaining its distinctive character.

Among the most notable new developments is the opening of 70-acre Franklin Park, which features a pair of brand new, LEED-certified 10-story office buildings with a combined 550,000 square feet of Class A+ office space and attached structured parking, not to mention club-level fitness centers that help promote employee wellness.

What are the Top 25 employers in the Williamson County area?

“We’ve raised the bar on several levels,” says David B. Wells, vice president of Spectrum | Emery. Not only are the buildings bigger, taller, and more environmentally friendly, with a smaller physical footprint, there is a lot of green space in the surrounding area.

“We built the project around a 12-acre park, so the buildings face this beautiful green space that features jogging trails and a walking path, and we have an outdoor amphitheater that can hold outdoor events.”

Notably, the campus connects to the greenways of Cool Springs, making it part of Franklin’s concerted effort to preserve open spaces and connect them with office parks, mixed-use developments and neighborhoods.

At the nearby Northside McEwen development, Boyle Investment Company is aiming “to provide an urban environment in the middle of the suburbs,” says media spokesperson Kristin Cales. “All of the buildings will have ground floor retail and then either office space or residential above,” she says, noting that the integrated, highly walkable environment will also feature a large central green in the middle, creating an engaging environment for office workers and residents alike, “and something different from what is currently here in Cool Springs.”

Meanwhile, at Berry Farms, Boyle is developing what Cales describes as “a whole new submarket” for the city of Franklin, featuring retail, residential, restaurants and office space, which she expects to be “the next new economic engine for the city of Franklin.” Several high-profile companies are opening offices there, including Lee Company, which will be moving its headquarters to a four-story, 100,000-square-foot building on the 600-acre site.

Notably, the project was developed in partnership with the Berry family, which has owned the land since the 1800s. “We want to tell the story of the history and the community we are building,” Cales says. “There are historical markers on the property and street names that reflect family names. And we are intent on honoring and celebrating that the 1863 Battle of Franklin happened there,” referring to one of at least three Civil War engagements that occurred on Berry family land.

Likewise, the downtown area is benefiting from the development and growth of local businesses that recognize the importance of historic preservation. Consider: Franklin Creative Suite, a work collaborative where entrepreneurial creatives can meet and work, and The Lodge, a co-working space designed to inspire local creatives.

Historic Downtown Franklin is also home to Danita’s Children, a nonprofit that rescues and cares for orphaned and impoverished children in Haiti and around the world. Last but not least, there’s David Braud Photography, located above the historic hardware store on Columbia Avenue near Five Points.

Braud, who focuses on doing head shots and portraits for clients, says he’s enjoyed watching Franklin grow and realize the benefits of the many smart investments that have been made in the downtown area in recent decades.

“I moved to Franklin 22 years ago and it’s been great being part of a historic city and watching it grow and become a center for art and culture,” Braud says.

One challenge facing Franklin now and in the near future will be adding to the affordable housing stock. To that end, the Franklin Housing Commission is working to encourage the production of affordable housing, approving a city staff position to focus on affordable/workforce housing and passing a series of ordinances that further that intent.

Meanwhile, local residents like Braud expect Franklin to continue to grow in a healthy, forward-thinking way.

“People here really appreciate good food, good music, and have good architectural sensibilities,” he says. “It’s a family-oriented community with great school systems and a place where locals are very committed to the businesses that are here.”