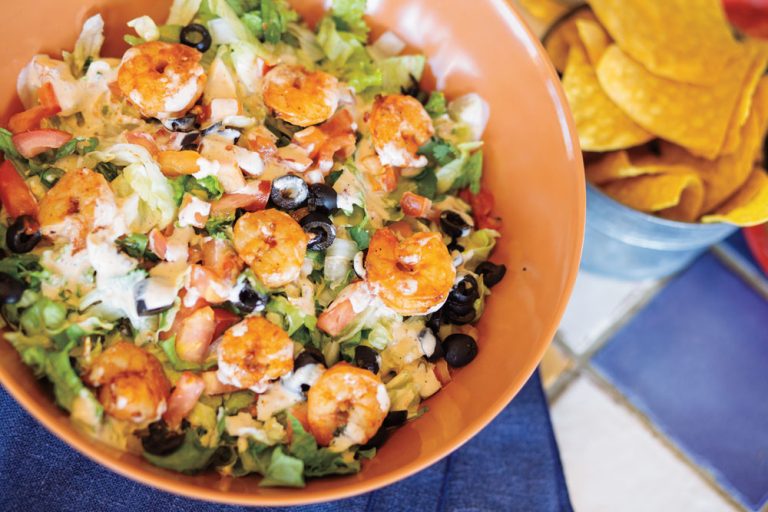 Feeling like a little nibble? A slice of artistic pizza? Maybe a full-tilt celebration dinner? Okay, just a sandwich then. Whatever you’re craving, Jackson’s restaurant scene will satisfy. The city’s eateries are more varied and interesting than ever. Here are highlights of some of the best.

A Slice of Heaven

Pizza lovers find the perfect slice (or slices) at Picasso Bistro and Pizzeria on Stonebridge Boulevard, where owners James and Lindsay Salter ply customers with local artists’ work on the walls and a huge selection of pizzas and more for the table. Their unique wood-fired, stone-hearth oven provides an authentic touch to pizzas that include Rockin’ Lobster, Black and Bleu, and Chicken Bacon Ranch among a long list. A wide choice of appetizers, salads, dessert and a full bar with an impressive beer list round out the menu.

Another popular pizza haven boasts the only microbrewery in Jackson in addition to lunch and dinner. Rock’n Dough + Brew Co., in downtown Jackson, is the second iteration of the popular pizza restaurant that began life as a Memphis food truck. Appetizers, salads, wraps, sandwiches and burgers complement a tempting menu of pizza choices, among them Spinning Goat (mushrooms, spinach and goat cheese), Angry Hawaiian (ham, pineapple and jalapenos) and Super Freak (white sauce, spicy Italian sausage, caramelized onion and honey).

After You Satisfy Your Tastebuds, Experience the Music Scene in Jackson, TN

Going international, Tulum Fresh Mexican Grill happily says it turns out its extensive menu with no microwave and no freezer, meaning they’re serious about the emphasis on “fresh.” An inventive menu includes an array of tacos, fajitas, quesadillas, burritos, enchiladas, salads, tortas and more. Fish tacos garner rave reviews, as do such picks as Tulum’s Cancun Bikini Wrap and Tacos Diablo…Thrill Seekers Only!

Discover the Recreation Destination that is Jackson, TN

For something completely different, don’t miss dinner (or Friday lunch or Sunday brunch) at Chandelier, where chef/owner Jennifer Dickerson serves what she’s described as “sexy Southern cuisine.” One look at the menu tells you she’s not fooling around about that. Pecan-crusted catfish is enhanced with rosemary-soy butter. Chicken and dumplings are served Southwestern-style with roast chicken. Pork chops? How about brined and served with peach salsa? The restaurant, opened in 2015, is housed in the old Neely House on South Royal, built as a hotel in 1901. The historic ambiance provides a nice contrast to a striking contemporary menu.

Baudo’s Restaurant, which celebrated its 50th anniversary, is the kind of welcoming family-run restaurant that diners cherish. Originally B & H Pizza, the Italian eatery was opened by Buzz and Helen Baudo in 1965, grew into a fine-dining establishment – the first to serve wine in Jackson – and now is run by the Baudos’ children and grandchildren. Lunch and dinner menus offer appetizers, salads, light entrees and pastas. Dinner entrees include traditional Italian favorites featuring pasta, chicken, meat and seafood. Baudo’s, on Wiley Parker Road, is open for lunch and dinner daily.

To find the freshest local ingredients, the West Tennessee Farmers Market is the place to go. Vendors offer in-season fruits and vegetables, plants, fish, beef, lamb, plus locally made products and crafts. For those who work up an appetite shopping, burgers and barbecue are available at the grill, as are the market’s famous fried-on-the-spot donuts.